And so, after almost two months, we continue our playthrough of Rome: Pathway to Power.

It's been a while, so if you want to catch up you can read Reiko's Introduction (here) and first post (here).

For a quick summary, here's what happened so far.


Hector, a slave living in the shadow of Mount Vesuvius, and the character we play, was sent by his master to give a letter to Fellonius the Consul.

After asking a local plumber for directions, Hector finds Fellonius.

Fellonius gives Hector some cash for his master's letter, and rushes off.

Hector does some minor exploring while I get used to the game's controls.


Hector steals someone's clothes in the baths because a slave won't be allowed on a boat.


Hector goes to the docks, notes that the money Fellonius paid him is the exact cost of a boat trip, gives all his cash to the boatman and leaves the destruction of the only home he's ever known. Surely he has mixed emotions about the death of everybody he's ever met in his life...


Now that we're all caught up on the first chapter, it's time to continue. When Reiko had finished the first post, Hector had escaped the destruction of Mount Vesuvius, reached Rome and done a day's worth of exploring.

I further explored Rome myself. Now, I found things in Rome in a different order than Reiko, so I'll be repeating a lot of things you already know.

The map has twelve locations, so we'll start with those.

If I go to the Colosseum after the herald announces an upcoming fight, I can see the fight.

At the southern tavern, I can play a game of dice if the gamblers are there. Of course, during my initial exploration I'm still sesterceless so I don't get to play.

At some point I found Unscrvpvlvs the money lender at this tavern, and borrowed 30 sesterces, the most I could get, from him. He'll be wanting 60 back when he calls on me – the game never tells me when that will be but I figure I can get the cash before he looks to break some bones.

Now that I have money, I try my luck at the dice game.

I was killed by an assassin on my first night and the game restarted from when I first arrived at Rome. I notice that Fellonius goes north as soon as we exit the boat, so I follow him using the FOLLOW command. He walks all the way north to one of the taverns and meets with another citizen and a guard for presumably nefarious reasons.


When I ask any of the participants what they're doing they get very defensive. 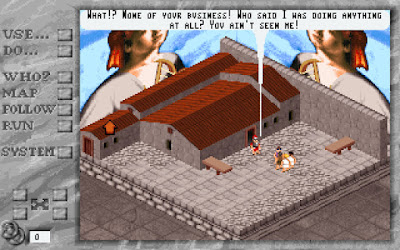 Intriguing. Whatever dodgy dealings are going on here my now dead master was surely involved as well. Throughout my wanderings I saw a few meetings Fellonius had at this tavern. And it wasn't always the same people.

He met with
Temple (North)

The priestesses speak latin that I assume isn't worth translating, but outside the temple is a soothsayer.

Nothing here but a priestess. Perhaps something happens here later

This is the open area in the centre of town and it's here that the slave auction takes place.

Something that drew my attention during the auction is that one of the slaves wasn't bought when I first came here with no money. It was a pretty young lady by the name of Vesta.

I don't seem able to enter the barracks for now – perhaps if I can get past the palace guards I'll be able to get in through the north.

The palace guard has really strong legs. When he kicks me I slide an entire screen and a half to the west.

Another place I haven't found anything interesting at. I haven't even found clothes by the baths that I could steal.

I can pay the hostel owner one sesterce for a night's sleep. Even after all my play I still haven't quite got the hang of how doors work, as I'd been in some before and nothing seems to happen so I just leave. This time, after paying for a bed, when I enter the door behind the innkeeper and wait long enough, evening turns to night and I see ZZZzzzzzZZZzzz's appear above the building. This keeps me safe and passes time until morning, as there doesn't seem to be much to do at night.

I note that if I leave Hector to his devices, he'll explore on his own. I was initially hoping this will take him to all important parts at important times. I did notice that after the slave auction is announced, Hector immediately makes his way there. But after that first time Hector just seems to stand where I leave him indefinitely.

After waking up in the hostel, I wander around, waiting for the slave auction because I didn't find the moneylender until late the first few times I played day 1.

Before a slave auction starts, a new announcement appears.


I run to the palace, and the crowd waits on expectantly.

So what's the punishment for being blonde in Rome?...

After being fed to lions and before restarting the game, the game goes on to tell me I should perhaps have warned the Emperor about the plot. When day 1 starts again, I have a solid plan - I need to warn the Emperor.

Starting again, I follow Fellonius immediately and see his meeting at the tavern. I then wander around for AGES looking for the moneylender. Where does this guy spend his mornings? I finally find him, but miss out on the first slave auction. At the second auction I buy Barbarus, champion of the arena the time I watched it, then wait for the next arena fight. I watch the fights while trying to work out how to enter my slave myself. After trying to talk to all people in the arena and trying to give them all money, I finally work out that I have to USE Barbarus – he appears in what is basically my inventory. Anyway, I send Barbarus off to fight partly for my honor, but mostly for my wallet.


I reload and this time instead of going to the slave auction, I take my 30 borrowed sesterces along with the 10 I won on the dice game and go straight to the palace to bribe my way in.


Needing more money and figuring the best way to get some is at the arena, I go to the slave auction and buy Barbarus again – my theory is that even ignoring his wins in my first playthrough, because he has more value he should be a better fighter – that may be an incorrect assumption. I have three gladiator purchasing options... 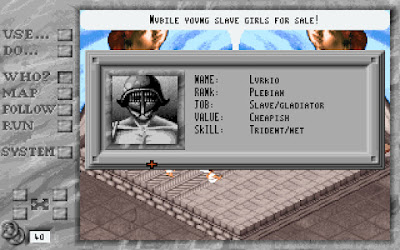 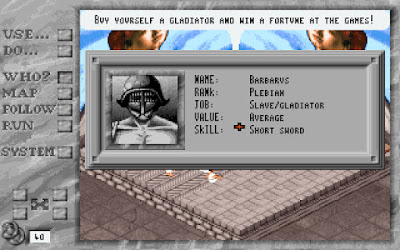 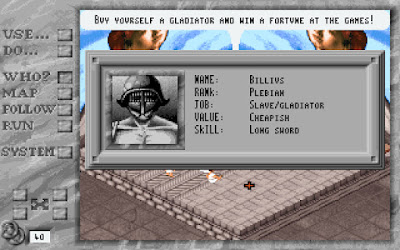 This time I get Barbarus for 10 sesterces, whereas last time he cost me 25. There seems to be at least some randomness in this game. That could make for some annoyances as I go on, but let's ignore it for now.

While wandering, I did find something of particular interest that I hadn't seen earlier. Fellonius visits the soothsayer outside the temple and gets some advice.


Knowing that the soothsayer's giving valid advice, I give him a coin of my own and get a likely true but not overly useful piece of advice...


Ah yes... I see scarlet spots upon a purple cloth...
… if only this cloth knew what you could tell...
... then the scarlet would turn to gold! 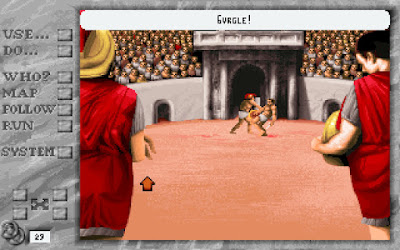 
Well, we've already found some randomness in Barbarus' price, so I expect there's some randomness in the arena fight too. The existence of randomness in adventure games annoys me because I don't know if I have the right tactics and just need the random numbers to fall my way or if I'm doing it wrong and no amount of tries will have me succeed. Should I have bought Lurkio or Billius? Perhaps it's relevant that evening hits as I'm about to fight. Is Barbarus powered by the sun like Birdman? Can I only win the arena fights if I find the moneylender before the first slave auction when his competition is easier? Will winning a fight give me enough money for the greedy palace guard anyway? Who knows. And with only one saved game and a restart of the chapter if I die it becomes extremely tedious to try new theories.

So, after all that time I'm basically at the same point Reiko was two months ago, still needing money to bribe my way into the palace.

As for what I think of the game so far, I'm torn. There are parts I love and parts I hate.

One thing I love about the game is that the world and characters move along at their own pace regardless of what I do. It makes the world feel much more real and moments like coincidentally passing the temple as Fellonius is getting his sooth said are very satisfying.

One thing I hate about the game is that the world and characters move along at their own pace regardless of what I do. It makes getting to places at the right time and waiting for things to happen tedious after playing the same part of the game a few times and it makes finding people (money lenders in particular) I need at the time I need them an exercise in frustration.
Posted by TBD at 23:59