Now that I've used both methods to enter the castle, let's see how I fared in each case. The castle's puzzles are also different on the two potential paths, so let's split them up and see where we end up.

Let's start with the Land of the Dead playthrough.

When we left off after Alexander entered the castle by his magic painted door, he was perusing his options. 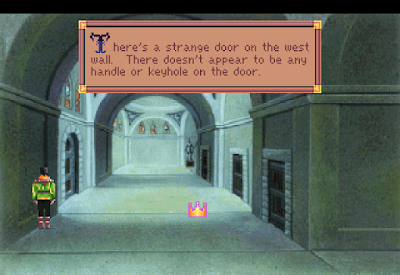 The first door to the right appears to be the dungeon I get thrown in whenever the guards capture me, so nothing special in there.

The second door is a similar dungeon, but this one contains a ghost. The ghost is a small boy crying for his mother. I assume it's Ali and give him the handkerchief his ghost mother gave me in the Land of the Dead. Before he joins her, I ask him if there's anything he can do to help me, as Alexander doesn't work for free.

The left door has no handle or keyhole, and the third door on the right is another empty dungeon.

Exploring the other corridors, I find a room with the sounds of guards behind it, and another door with the jester I'd seen in the bookshop sitting down.


This time I don't automatically lose the game when I'm captured by the guards and stuck in the dungeon, so I use my skeleton key to escape. I find one more door I can enter. It takes me to the main foyer, where I had entered as a servant woman in the alternate route.

The guards in the foyer capture me, but seeing as I escaped last time, I anticipate this time should be just as easy. 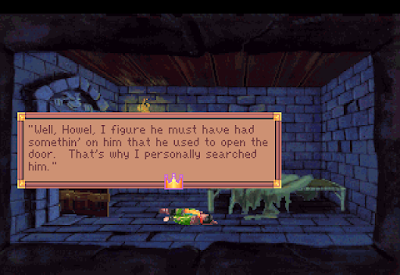 One advantage of writing these posts on adventure games that you don't have when you just play them for fun, is it forces me to constantly take screenshots, and then think about the game as I write a day or so after I've played. I didn't realise this area was the basement until I found the entrance to the foyer was upstairs from my location. That meant that the man of steel that Ali mentioned is likely the suit of armor in this area. I probably wouldn't have put the two together if I didn't have a screenshot of Ali's hint. So, thank you, Adventure Gamer Blog – I probably wouldn't have thought of this idea so easily without you! 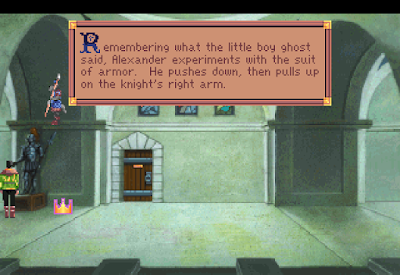 After reloading, I tried playing with the armor again and this time didn't get captured by the flying dog. After entering the secret door, I found myself in some kind of place that was part crawlspace, part secret room. Inside the room is a flight of stairs going up, and a hole with light coming from it. I look through the hole-in-the-wall (not the little insect that got lost between the labyrinth and the Isle of Wonders hole-in-the-wall, an actual hole... in the wall). 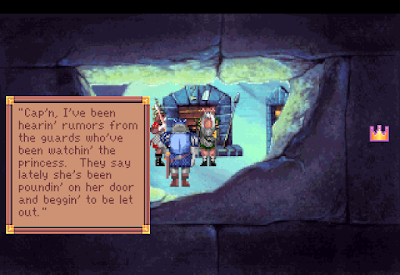 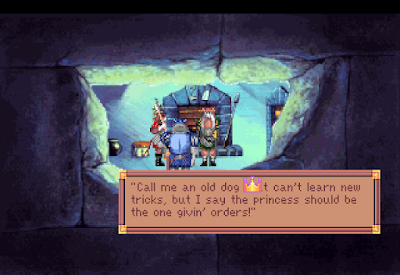 They also speak of a magic door to the treasury room that the royal treasurer is no longer allowed to enter. At one point one of the dogs overheard Alhazred talking to the door.


I go up the stairs and find another hole in a different wall.


As I approach I hear crying from behind the wall, and find...


I ask her the only question I've been wondering about for the entire game.

I look at fair Cassima for a moment, but then something happens. I hear scuffling, a woman's brief cry, then silence. Cassima has been taken!

Then I reload my game and instead of just looking at Cassima lovingly, I try to be of some use. I shove my weapon through the hole-in-the-wall, and she eagerly takes it 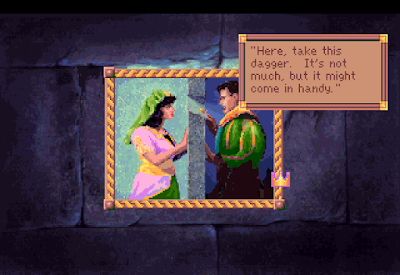 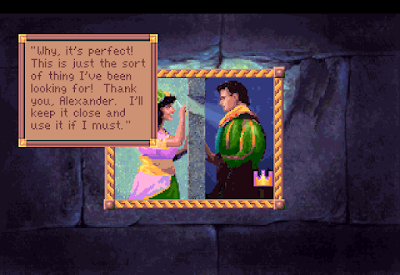 Further along, I find another hole. The castle's maintenance crew really need to invest in some Selley's No More Gaps.

Behind this third hole is Alhazred, and he speaks out loud when he writes letters about his evil schemes.


To summarise his letter, once he has the crown, Cassima will meet with a <hee-hee> accident. Alhazred would have loved to send Cassima to the letter recipient, Shadrack. But he mentions how poorly that worked out when he had previously sent Cassima to <ho-ho> Mordack.


Actually, all I hear is yanny.

At the end of the interior walkspace, I find a secret door to an area surrounded with black cloaks. It turned out I was in a closet. 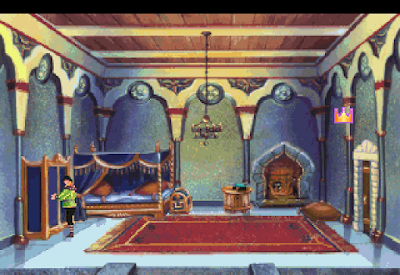 Exiting the closet, I find myself in the Vizier's bedroom. In there, I find a piece of paper with the word, “ZEBU” printed on it.


In the trunk at the end of the bed, which I open with my skeleton key, is a letter from Shadrack to Alhazred.


In the letter, Shadrack congratulates Alhazred on his plan to seize the crown and isolate the islands of the Land. There's a bunch of other similarly incriminating letters, but Alexander only keeps the one.

While doing further exploring in the basement corridors, something changes as I notice the music has changed to wedding music. I look through a keyhole to the upstairs area and notice the guards have left.

I go through the door, but before I can enter the grand hall, Saladin comes out. 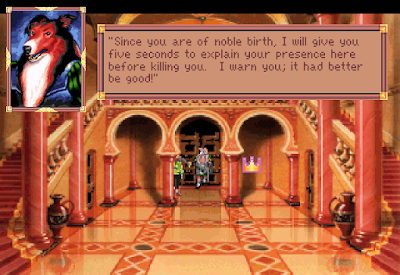 I demand he hear me out and show him the Vizier's incriminating letter. This takes me much more than five seconds. Just saying, Saladin – if you want people to take your threats seriously, you've got to follow up. 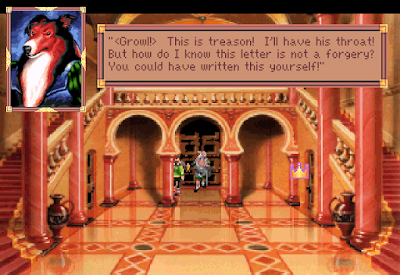 After asking Saladin to think about it, he realises he should have noticed the Vizier's betrayal earlier.

But first, let's see how we get to this point in our Beauty's Serving Woman Disguise playthrough.

When we left off after Alexander entered the castle in his serving girl disguise, he had just gotten captured by attempting to enter the most obvious door. So we'll try a different approach.

Instead of taking the centre door, and unable to take the other doors due to them being locked, I climb the stairs.

As I reach the top, I overhear a conversation by some guard dogs.


There's a reward for the nightingale, which makes me think I can use either the toy nightingale or the real one at some point. Ignoring that idea for now, purely because I brought the paint brush instead of the nightingale, I make my way to an alcove when their backs are turned. 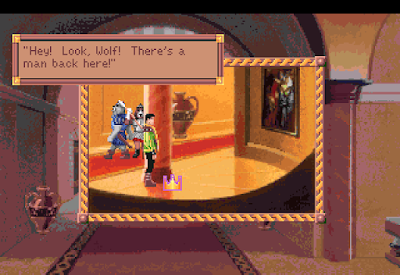 I try to find the right place behind this column, but wherever I go, they see me either before or after passing the column and the game won't let me move once they start to get near me.

After an embarrassingly long time, I realise that if I click my hand on the pillar instead of just standing next to it, I hide better. 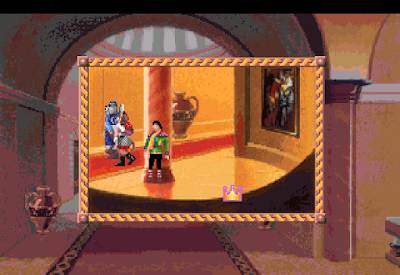 After they pass, I can control Alexander again, and can look at the painting, which is of Cassima's dead parents. I can move the portrait and take the nail that had been holding it up, but even if I reach my hiding place in time, the guards notice the change, and while investigating, they notice me.


After they pass, I quickly try to get to the door across the hall, but Alexander proves himself to have terrible pathfinding, by walking all the way back to the end of the hall before going back to the middle and getting himself promptly caught by the guards. 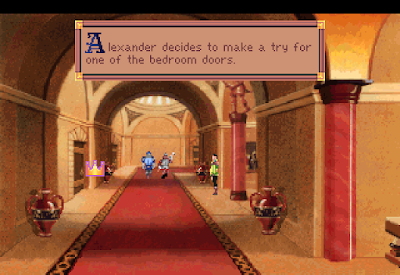 Having run out of ideas here, and assuming I need the nightingale rather than the paintbrush to get past these guards, I reloaded to before I entered the castle. We covered what I did at that point in my previous post where I ended up in the Land of the Dead, but after doing all that, I reloaded again, and just picked up the nightingale before re-entering the castle as a servant.

Armed with my nightingale, and knowing that the guards would be interested in it, I trying showing it to them in every way I can think of. 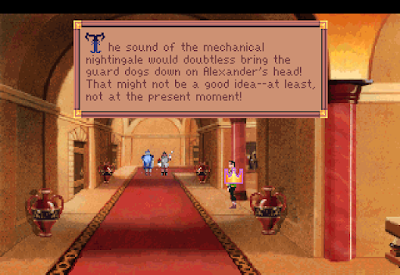 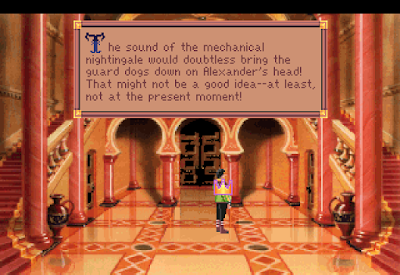 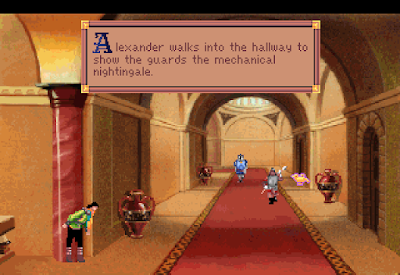 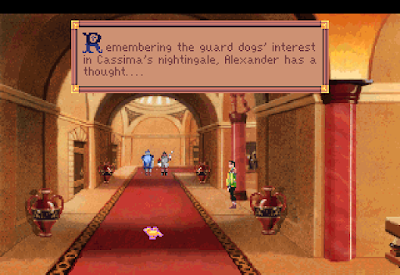 I eventually learn the correct place to use the nightingale. 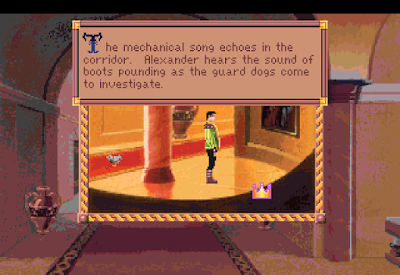 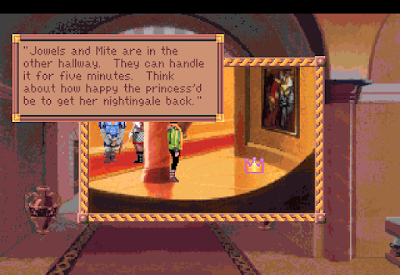 Okay, now that I've gotten rid of the guards, I can take the nail from behind the painting, and enter Alhazred's bedroom.

In the bedroom, knowing what to do from my previous exploration, I find the ZEBU note, unlock the trunk with my picture-hanging-nail, and take the incriminating letter.

I also find Cassima's bedroom and this time talk through a door rather than a hole.

I put my dagger under the door, for Cassima to use if she gets the chance.

At some point I hear the guard dogs come back from the nightingale distraction. I duck into the alcove, put the nail back in the wall and replace the painting. Then I once again hide behind the pillar.

The guard dogs have a talk, and we hear Cassima scream as she's taken away by the Vizier's page.


The dogs notice that the Vizier's henchman is taking Cassima in the opposite direction to the wedding. They go to investigate, and hang out in the back hallway. I leave them and go back towards the front door. Then the music changes. 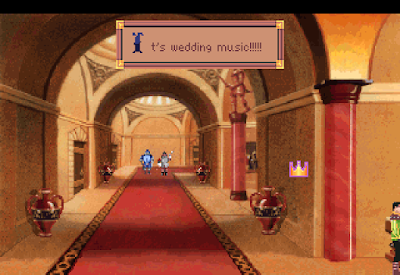 I rush downstairs, am once again confronted by Saladin and we prepare to crash the wedding! 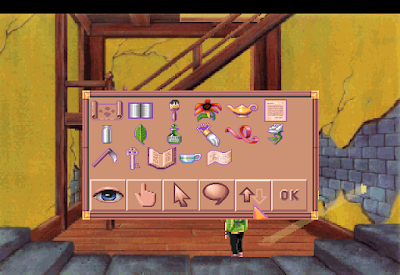 P.S. As some of you have already noticed, despite finishing the game using both of these methods, I neglected to do something earlier that opens up a third, best ending. I've since played the game again and gotten the best ending. I'll detail the extra quests in the upcoming WON post.

Predictions made: (No changes this time)
Posted by TBD at 23:49