Alone in the Dark - Kitchen Nightmares 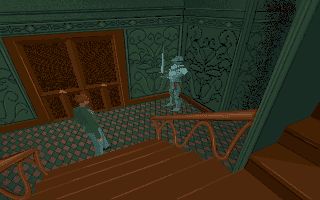 To my right, a suspicious suit of armour, holding a very sharp sword. Ahead, a pair of locked doors that closed as I arrived on this floor. So I choose to go to my left, towards the unknown. This direction leads me to a corridor and some stairs down. This would be a bit more complex and require a bit of exploration before I’d even know where to go and what to do.

The corridor’s first room was a small bedroom, with little of note except a notebook. This was the diary of Jeremy Hartwood’s final days in this house. A troubled artist, he had delved into the darkness that consumes this house and fell foul of its corrupting touch. In a series of dreams, he found stone pillars in a dark desert, a strange man whose look froze him dead with fear, and a sacrificial knife used for human sacrifice. 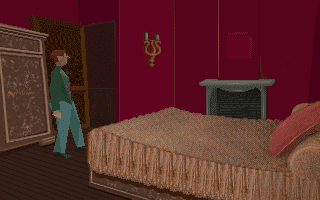 It was clear that this strange otherworldly being wanted a body to occupy, and Jeremy was at least temporarily able to deny him that. Time will tell if I can do better, and rid the curse that has clouded Derceto for all these years. I moved on to the next room, a bathroom, currently occupied.

I could see an item in the room, but had no way of defeating this strange monster that had taken residence in the tub. Instead, I decided to dash in there and grab it, and while I was there, search the cabinet. Thankfully I could do this only taking a couple of hits, and was able to heal myself a little by drinking from a flask found in the cabinet. The item: a simple water jug, empty of course. In true adventure gaming style, I’m sure this will come in handy later on. 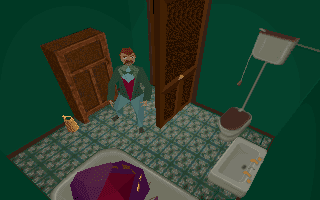 The next room was dark, and I dared not venture inside. I had a lamp, and some oil, but no way of lighting it, so I was a little stuck. Around the corner was a long gallery, showcasing some of the strange paintings that Jeremy Hartwood was famed for. On the near wall was a picture of a trapper or woodsman, holding a hatchet. Moving down the room got me a hatchet to the back, and death quickly followed.

One quick reload later, and I decided to explore downstairs. This looks like the ground floor, and there’s quite a few doors to try. A couple of those doors are locked, but I did manage to find the kitchen. In here I found a couple of knives, which might come in handy as weapons, if nothing else and a large pot containing… something. In the pantry, I found a tin of biscuits and a key, while in another little side room was an oil can, a barrel full of water (which I used to fill my jug) and hidden in the coal was a shoebox, containing a revolver. 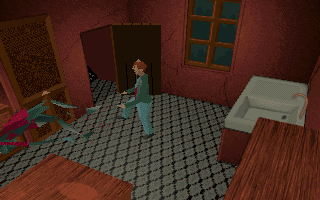 Moving on to an adjacent room, I find the dining area, with a table set for several people. The only things here though, are a collection of zombies. In my haste, I use the pot, which seems to contain human flesh! (not sure how Edward Carnby knows what that would taste like, and the graphics are too indistinct to suggest a particular meat contained within). Reloading and repeating my steps, I put the pot of human stew on the table, leaving the zombies transfixed and I am able to move onwards. I remember this particular puzzle from playing in the past, and when I moved onto the next room I thankfully remembered that too.

Through the door lies a smoking room, a literal one, which will fill with smoke and kill you. Quick movement is required to move towards the centre of the smoke, an old ashtray and douse it with water. After that, you can relax and explore, finding a lighter, an old music record (a little early for vinyl, so probably shellac), and more doors. This place truly is a maze, and I feel I should make a map at my earliest opportunity. 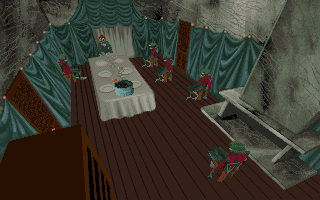 One set of doors is locked, the other leads back out into the main foyer. But I must have gained at least a few items worth using. I know I can now look in that dark room, so I make my way back upstairs. This seems to take you to the other side of the armoured knight, and a new door. Inside, is a ghost!

A new arrival to this game, the ghost kills me when I approach it, but there’s a record player there and I have a record. At this point I run into a problem with items, as it seems I’m carrying too many. I haven’t used half of these things, so I’m not sure what to do. I decided to find an empty room and drop as much as I think I can manage without, hopefully this won’t come back to bite me (I drop books having read them already, the jug, the used medical flask and case, and after filling my old lamp, the oil can). 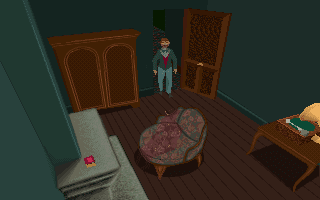 After this, I can pick up the gramophone and play the record. This time, I’m not attacked, and can take the matches from the mantelpiece, the poker from beside the fire, and some cartridges for the rifle from the cabinet. A picture on the table shows Jeremy with his niece, but doesn’t seem to indicate who this would be (since the niece is the other playable character).

Getting past the knight is easy it seems, so long as you don’t touch the armour it won’t attack. So I decide to make my way to the darkened room, and light my lantern. In a somewhat surprising move for this game, the room isn’t filled with monsters, but rather a small bedroom with a couple of items on a table. One is a heavy statue, and the other is a book, but I can take neither due to carrying too many items.

Leaving this for now, I head back downstairs. One room I haven’t tried yet seems to be some sort of greenhouse, full of plants and a statue of a hunter, perhaps as mentioned in the book about the golden fleece? Upon searching the statue, I find arrows, but am also surrounded by spiders, so I beat a hasty retreat. A nearby door is unlocked by the key from the pantry, and leads to the cellar, alas this seems to be overrun by blood-thirsty rats.

My puzzles for next time:
This definitely seems like the largest and most open part of the game, and seemingly non-linear too. I am able to go to quite a few rooms, but some are locked and others are blocked my monsters I have yet to figure out how to defeat. The use of the pot of human stew to defeat the zombies suggests that there’s a solution to the rats and spiders, but I can’t think of one at the moment. My other option is the painting, and I seem to recall firing an arrow at it, but I’ll try that next time, as well as properly mapping the place to make sure I haven’t missed any obvious doors, the fixed camera angles can sometimes obscure available paths.
Posted by Ilmari Jauhiainen at 23:00