Alone in the Dark - Bows, Books and Vagabonds 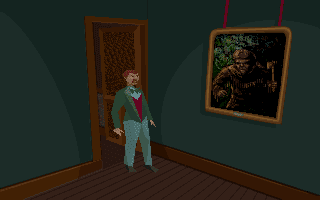 I was a little lost last time, but progress has been made! I decided to leave the statue and the book where they are in the darkness, having no space to take them, and turned the corner towards the gallery. Jeremy Hartwood was a painter of some talent, and had a gallery made in his house to display those pieces that presumably meant something to him, or maybe just couldn’t be sold.Firstly though, I had to contend with a painting of a man with a hatchet, which could fire out at me and kill me. No easy task, I tried several of the items that I had collected along the way before the solution came back to me. The “Old Indian Cover” that I had picked up all the way back from the attic wardrobe came in handy, covering the picture and saving me from the chop. 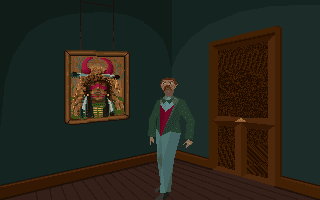 With that dealt with, I could explore the room safely, or so I thought. Wandering to the end of this long hallway, I found myself getting shot with arrows from the opposite end. After a death and a reload, I knew that two could play this game. From a safe distance, I used the bow I found much earlier and the arrows I got from the statue on the ground floor to shoot back. The first arrow missed, but the second found its mark and destroyed whatever spirit infested the painting.

The paintings sure are interesting, and give us little clues to the story (apart from the ones that try and kill you, they seem otherwise plain and uninteresting, one being a trapper/hunter type and the other a native American). Starting from the Trapper side, we have a purple screaming ghost-like face next to a painting of an old tree that’s maybe on fire or has something burning on it, then a pair of double doors. After the doors there are three paintings, all similarly coloured, showing three pillars, a building and a man. These represent part of the visions and dreams mentioned in Jeremy’s diary. 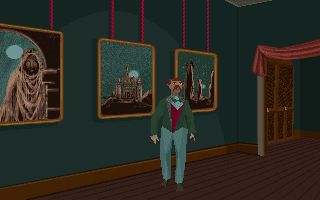 At the end of the hall was a door to a small bedroom, indicating that the house’s layout was awful even before it was infested with demons. I kept expecting a monster to jump out, but instead all I found was a fake book which I’m not sure why I picked up but I did, and I noticed the grandfather clock was in 3D so I gave it a push to reveal a secret compartment. It contained some parchment and a key. The parchment gave some details about monsters and evil creatures, perhaps hinting at ways they can be defeated. It was quite clear that these monsters are not able to be killed, but they can be returned to where they came from.

In particular the parchment talks about “the prowler amongst the books” and “the Vagabond”. While I digest this new knowledge, I make my way to the double doors and enter the room beyond. Again I am plunged into darkness. How a room with double doors opening onto a well-lit room can be in total darkness I don’t know, but I accept the game’s conceit and light my lantern. I am greeted by a library, with a desk in the middle (and a lamp, but I don’t know how I’ll light it). I am also greeted by a rather angry, purple, ghostly creature. Is this the Vagabond? I can’t find out right now because it kills me with a few hits. Its glowing eyes staring at me all the while, it seems I will have to take stock and re-read the parchment to try and figure out how to deal with it. My memories of when I last completed this are very vague at this point, but I was under the impression I needed a special dagger to kill this, but the darkness requires me to use the lantern, so I’m not even sure how I would attack it. The parchment is a little cryptic, but it says that “Steel kills the vagabond who never dies”. Not really sure what I have that will work, especially since I can’t really do anything without light to see by.

I decide to take a different track, and find a place I can use this key that I found. There are a few locked doors remaining, but it doesn’t open the library (which is locked from the side where the suit of armour stands, although this can be opened from the other side), and it doesn’t open the locked door in the main hallway on the ground floor, which I think is the ballroom (accessed via the statue/garden room, which is currently infested with spiders). 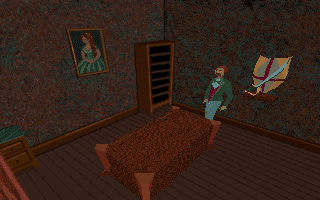 The last place I can think of is the locked door in the smoking room, and it works! It turns out this is Jeremy’s study, and right away my eyes are drawn to the 3D desk and the sword and shield on the wall. Now is the time to use the cavalry sabre found upstairs, and once replaced on the wall with its partner the desk moves out of the way to reveal stairs down. Separate from the basement I found earlier (infested with rats), what will this passage hold? But that exploration will have to wait until next time.

While I was back at the front of the house I tried a couple of doors I hadn’t before: the double doors opposite to the smoking room lead me to a large room and a sword-swinging pirate. No amount of witty insults could parry his blows, and soon I was wearing his sword like a shish kebab. My fate on the other doors was similar, the main doors to the house opened to a strange sight, as some great tentacle attacked me and dragged me to my doom, truly this mansion is a maniac! 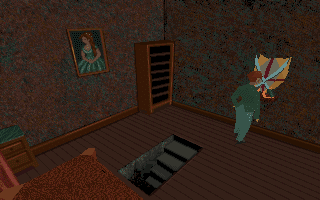