Administrator's note:Due to a lack of time to write about Spellcasting 301 at the moment, we're pausing that game temporarily and getting on with the next game on our list. Over to Andy Panthro... 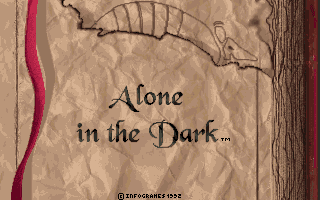 How do we assign a genre, when something is breaking boundaries and creating something which at the time was quite unique? On the other hand, so many elements are previously known, is this evolution or revolution? With Alone in the Dark, we see both a game which moves Adventure into 3D (mostly), as well as being the inspiration for an entirely new category of games, although the originator is often forgotten.

Created by Infogrames in 1992 it borrows heavily from horror novels and films to create a creepy and atmospheric adventure, filled with puzzles, traps and monsters. The game uses both 2D backgrounds with 3D characters, and the CD-ROM version also has a magnificent orchestral soundtrack as well as voice-acting which sounded a lot better to me 25 years ago then it does today, but it was good for the time. 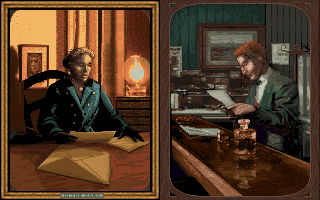 The story revolves around the remote house Derceto, whose former owner, Jeremy Hartwood, has recently died. Your first choice is to pick your player character, either Hartwood’s niece Emily, or the investigator Edward Carnby. I’ve played through most of the game with both characters far in the distant past, but I’m more favoured towards the obviously noir-ish inspired detective Carnby (who would go on to be the main character in the various sequels and indeed the awful film). Let’s hear from the man himself:


On my door, a dull brass plate says “Private Detective”. The few friends I have call me Carnby, the others call me the Reptile. I don’t care to think what my banker calls me, these days I leave my letters unopened; bills and threats to send in the receivers just ruin my day.

When an antique dealer called Gloria Allen contacted me, I slipped into my best shirt, holstered my .38 and got to her shop as fast as I could. I was expecting something sordid, blackmail probably. Boy, was I wrong!

What I was asked to do was visit a property called Derceto and find a piano in the loft. It was an old piano, with secret drawers, the kind that people in antique stores go crazy over. The Derceto house is supposed to be piled high with classy junk, furniture, books, paintings. It looked like whoever owned Derceto was about to get cleaned out.

I was going to bring up the subject of money when Gloria Allen handed me $150 and a key. I kept myself from grinning at the thought of my banker’s surprise. He doesn’t like his victims getting away.

I looked over a copy of the police report. The former owner of Derceto, a guy called J. Hartwood, had hanged himself in the loft. The coroner concluded it was a clear-cut case of suicide. I promised Gloria Allen I’d give the place a look-over.

My report will be ready in a couple of days. I’ve been reading up on the history of the old house, it’s the kind of place ghosts run away from in terror. Grisly murders, curses, lunacy… Luckily devil-worship makes me smile, so this is my idea of a paid vacation. 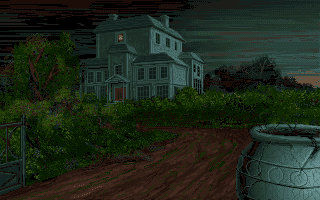 One of the things I most appreciate about the introduction, is that your journey into Derceto uses the exact same rooms you’ll see as you progress through the house, giving you an idea of how to escape, if you could possibly make it that far. But for now, all we’ve done is walk into a seemingly empty house, seen the doors close behind us (just a draft, I’m sure, these old houses are all the same), and made our way to the attic.


To maximise the atmosphere this otherwise very simple introduction to the game avoids any comment on the house as your character makes their way to the attic, and with no narration or text the player is left to see this vacant house, full of rooms and passageways. The footsteps are loud, the floorboards creak with every step, while the grand music provides a vivid contrast to the sparse rooms and empty corridors. 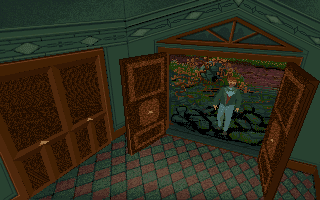 The fixed camera, a style which became intensely disliked by many in later years, provides a claustrophobic perspective, and the choice to use unconventional angles does much to heighten the feeling. It can be used to frame aspects of a room, or be more tricky and hide them from the player, and the use of odd camera angles is often used in film for this same effect.

Everything in the design is done to make this seem like an inhospitable place, the idea being that the house wants to trap and kill any that may venture within its walls. Death lurks around every corner, quite appropriate for something that borrows from the likes of H.P. Lovecraft, but as a seasoned Sierra adventure game fan, I know to save often! 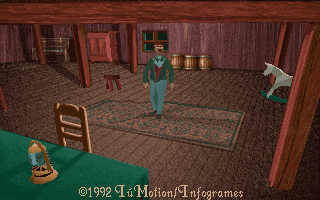 Around us are various objects and items to catch our eye, including those in 3D. The music changes, and we are left, Alone in the… actually it’s quite light inside the attic thankfully. This first room gave me a lot of trouble when I first played it many years ago, so I can at least remember this upper floor. The rest of the house is a far more hazy memory, so we shall see how soon it tests my skill and patience.

Although I have a lovely boxed copy of the Alone in the Dark trilogy, for this review I’ve got a digital version from GOG.com, which is the CD-ROM version. The game’s controls and fixed camera angles can provide additional frustration for modern gamers, but I’d welcome everyone who can to play along!

Note Regarding Spoilers and Companion Assist Points: There's a set of rules regarding spoilers and companion assist points. Please read it here before making any comments that could be considered a spoiler in any way. The short of it is that no CAPs will be given for hints or spoilers given in advance of me requiring one. As this is an introduction post, it's an opportunity for readers to bet 10 CAPs (only if they already have them) that I won't be able to solve a puzzle without putting in an official Request for Assistance: remember to use ROT13 for betting. If you get it right, you will be rewarded with 50 CAPs in return. It's also your chance to predict what the final rating will be for the game. Voters can predict whatever score they want, regardless of whether someone else has already chosen it. All correct (or nearest) votes will go into a draw.
Posted by TBD at 21:15

Email ThisBlogThis!Share to TwitterShare to FacebookShare to Pinterest
Labels: 1992, Alone In The Dark, Andy Panthro, Introduction