This game is bugged. 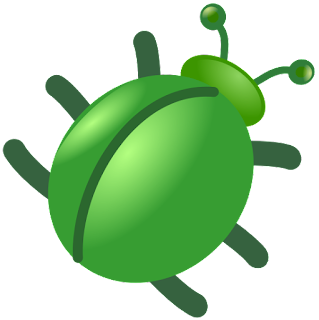 I noticed it while checking from the official clue sheet how could I get in to the tower of wizard Xiiz. The answer was that the door of the tower would open with the magic word “humkaat”. The problem was that I had already tried it, but the game had failed to understand the very word. I was getting a bit annoyed, so I searched for a walkthrough, which told me that the word to be used was “humaak”. Since "humaak" has not been mentioned anywhere and the official clue sheet speaks of a similar sounding word "humkaat", I can only assume that a dyslexic programmer had confused “humkaat” and “humaak”.

But this wasn’t the worst mistake the designers had made. The first thing mentioned in the walkthrough I had uncovered mentioned a bug involving the verb BURY. I cannot even fathom why this verb was included in the first place - its only task is to effectively remove all items it is used upon. Surprisingly and I suppose unintendedly, it also works on monsters.

Just to get a complete view of the game, I used this bug to my advantage to get rid of the two monsters that the clue sheet told I could only deal by combat. Killing my reflection turned out to be completely optional. All I achieved was to gain an empty bottle, with which I could carry water to a thirsty Kelf, who then told me a rumor that mummies could be slain only by magic. 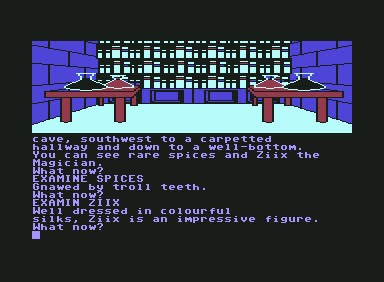 Killing the giant was more useful, since it opened up a completely new area. Under a hill of rotting beans I found a trapdoor leading to an area occupied by cowardly wizard Ziix, who let me take his spices (focus for strength spell), if I just didn’t hurt him 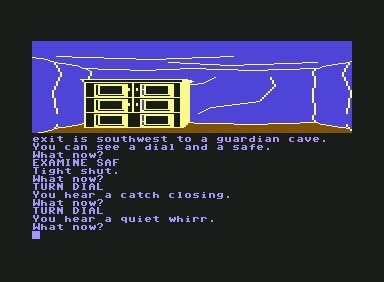 Near the Ziix, there was a room with a safe. I could have turned the dial forever, but the trick was to turn the safe - it had no back wall. The safe contained a box, filled with poison gas (finally I got something to do with my gasmask) and an emerald. After leaving the room with the safe, I encountered a guardian, who attacked me, if I had the emerald in plain sight. If it was still in the unopened box, the guardian did not mind me at all.

Another problem I hadn’t still figured out was a pool of acid. Reading the official clue sheet made me roll my eyes. Apparently my chunk of chalk was big enough to neutralise the pool. Behind it I discovered a kind of temple dedicated to few gods. It contained valuable silver bars and a fan (focus for extinguish spell). 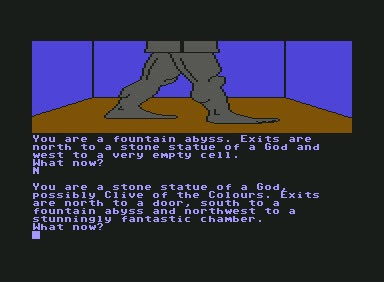 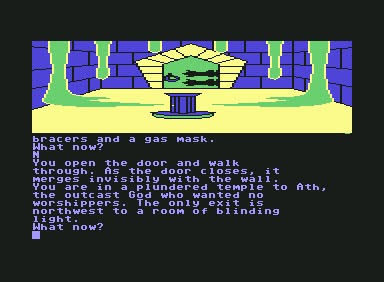 Near the lair of Ziix I also found a tube. It turned out that with the gas mask, flask full of air and the tube, I could finally enter all the water screens. I won’t bore you with details of mapping the water world and just list the things I found:


The two latter items led me to few treasures. Let me begin with the crowbar. I had already noted that I could use the extinguish spell to put out the Giant’s forge and I had entered a chimney, just to be stopped in my tracks by a grill. The crowbar was used for ripping away the grill, which then revealed a necklace behind it.

The cloak allowed me to pass a cloaked statue guarding two temples. The first temple was dedicated to Litter Muurdox, evil god of Sun (remember that in the game mythology Moon, the source of magic, had combated Sun). Within the temple I found a black ball. The ball was a focus for Bounce spell (which I accidentally never found an occasion to use), but I could also drop it to create Extinguish spell without losing my hit points.

The other temple was apparently dedicated to a god of rubber. 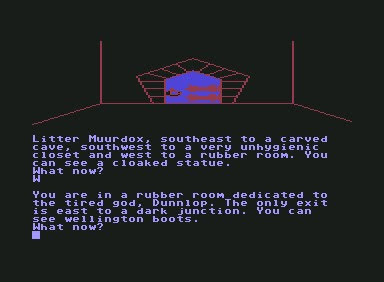 The rubber boots I found in the temple were of use in an electrified metal room. Beyond this room, I found a crucifix, which let me move through a crypt, unharmed by a vampire guarding it. 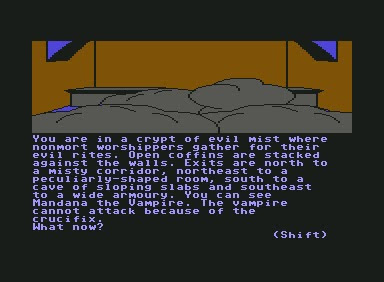 Beyond the crypt began a long cave, leading to another temple of Litter Muurdox, and after that to the final area of the game. The temple itself contained a raisin, which could be dropped and thus transformed into a golden sphere emitting light. But the important thing was the antechamber of the temple, which was also a tomb for the avatar of Litter Muurdox. The sarcophagus of the avatar could be opened with the magic word “obis” and the mummy inside it could be disintegrated with the word “ollabin”. My reward was an expensive brooch. 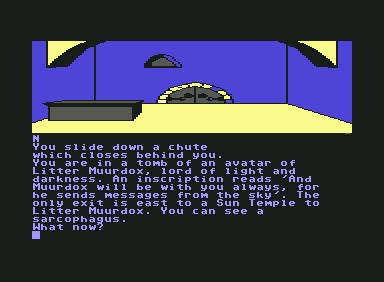 What I’ve described so far in this post has been completely optional, and beyond few additional treasures my journey has revealed only an alternative route to the final area of the game. In fact, I had already found another route to this area, before the beginning of this post - and basically completed the whole thing a short while further - but I still wanted to find all the secrets within the game, so I continued playing. Despite the actual course of events, I still wanted to leave describing this area for the end of this post, where it thematically fits best.

So, before finding the route, through the temple of Litter Muurdox, I had found another door leading to the final area, guarded by a ferocious dog.

I had a piece of meat, which was explicitly described as dog food, if I tried to eat it. But I wasn’t meant to befriend the animal. Instead, I hid some poison pills in the meat and killed the poor creature.

The final area of the game was situated within and near the volcano I had seen above ground. 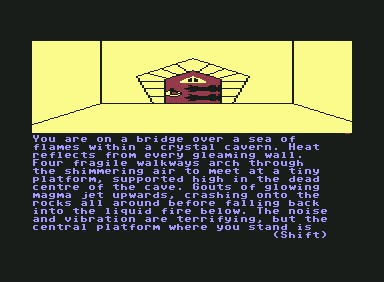 Eventually I found a red room, with a thin red line drawn on the floor. A demonic voice threatened that everyone crossing the red line would be killed. Fortunately, no one spoke anything of erasing the whole line.

After a few room I was blinded by flashing lights. The trick was to cast Extinguish to lights, so that I could again see something.

Finally, I found the central vault, where the Red Moon was stored. When I tried to take the crystal, two dragons appeared and surrounded me. The final solution was my fan. It was not just a focus for Extinguish spell, but waving it also created a great wind, which blew the fire of the dragons back to them. After taking Red Moon to my hut, I had won.

This time, I really have no idea whether to like this game or not. It certainly has an unfinished feel, due to all the bugs, but there really were interesting things going on. To be fair to Red Moon, I will score all the individual categories without taking the bugs into account, and only at the end reduce two points for the bugs.

The traditional adventure game puzzles in Red Moon fall into the OK category. They were not very memorable, consisting mostly of simple uses of items or magic words. In addition to the puzzle of dropping chalk in acid, the problems were quite simple to solve.

And then there’s the more CRPGish side of the game, that is, the battles with monsters. I have changed my mind about this issue couple of times. I admit that in general I dislike these extraneous elements in adventure games. Putting my personal preferences aside, I was at first somewhat surprised that you could just ignore most of the monsters. Then my surprise turned into an annoyment, when I learned that all battles put the player into a disadvantage, because the ghosts of your slain enemies might come back to haunt you.

After playing the game into completion, I understood that this disadvantage was more of an interesting design choice. You see, the game can be won without going through any battle, but a complete victory, with all treasures found, essentially involves at least one fight. This addition of more difficult problems for all completionists is a feature I would gladly see more in adventure game, since it adds to the replayability of the game. Thus, I shall give a relatively high score for this category.

Red Moon had some interesting innovations, which differentiate it from other Level 9 games. The obvious examples are the battle and the magic mechanics, the latter of which uses the inventory creatively. Even the usual inventory problems were helped by the FIND spell, which made it unnecessary to keep a log of where you stacked your stuff.

Another innovation I haven’t mentioned involves typing. In previous Level 9 games, after typing your command and pressing ENTER you had to wait the game give its answer and possibly even draw a new screen, before you could type your next command. In Red Moon, the game keeps a memory of your typings, so that you can e.g. just quickly type directions to get to the place you wanted. All of these innovations deserve an improvement in the score.

Contemporary reviews of Red Moon mention an absorbing plot, and I really have to wonder did they even play the same game. There’s a basic framing story in the manual, but except for some tidbits, like the descriptions of various temples, there’s no real story to speak of beyond the basic “get the crystal and leave”. The setting is not much more satisfying - a simple D&D style dungeon, with all kinds of creatures shoved together.

Most of the pictures played with few motives - stairs, temple rooms etc. - with only some variations. Nothing to really get excited.

The CRPGish mechanics made the beginning more exciting than the usual Level 9 game, because every step might lead to an engaging battle. After I had mapped most of the dungeon and it became obvious how little the battle mechanics really mattered, lot of the excitement went away. Fortunately there were almost no silly jokes ruining the atmosphere.

There are some vivid descriptions, but otherwise text rarely moves above an adequate level. Characters in the game have only few lines to say and are one- or even zero-dimensional. 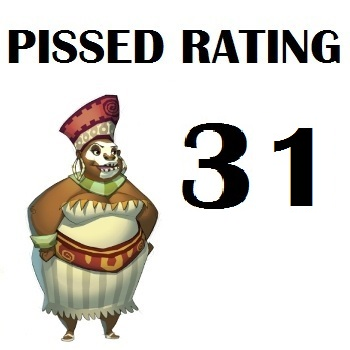