Inspector Gadget - From Russia with Gadgets 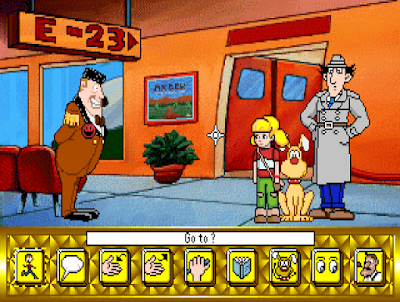 Inspector Gadget isn’t a bad game by any stretch, but as I am inching closer to the end it is becoming… boring. The writing is still good (and occasionally brilliant), but the lack of care that the developers take with their settings and puzzles is making it difficult for me to want to keep playing. There’s been precisely one puzzle this entire game that required you to have Penny and Brain work together. None of the “disguise” puzzles have been more than just picking up the only objects visible in the room. I know I am not the target audience, but I am ready for this game to be done soon. I seem to have a knack for playing “occasionally brilliant but mostly just boring” games these days since I have been playing Icewind Dale and Quest for Glory V in my off time. I expect those are not popular opinions, but I keep having the same problem. If I wanted boring, I’d play The Bard’s Tale III...

As we start this week, Gadget and Penny have arrived in Moscow, only recently freed from the shackles of the Soviet Union. We have a decade until Putin, so what type of trouble can we get into in Yeltsin’s Russia? And I don’t just mean by the Bard’s Tale fans...


The Gadget gang are met at the gate again, this time by a helpful Russian tourism minister. With the Iron Curtain down, I suppose tourism is increasingly important to the Russian economy. We speak to the emissary and he tells us that he was sent to show us around while Gadget investigates. He perks up Penny’s interest when he tells her of a famous Russian circus. Penny receives permission to go from her uncle to go and we leave to board a nearby train. Gadget runs off by himself to investigate, confident that his niece couldn’t possibly get into any trouble while he’s working.


It doesn’t take too long for us to realize that we’ve been tricked again: we’ve been kidnapped! And we didn’t even notice! You’d think Penny and Brain would know the warning signs by now. There’s not too much in our room that we can interact with: a window, some luggage, a pull-out bed, and a mean-looking M.A.D. agent who is responsible for watching us. There’s also an emergency brake, but it is both too high and well-guarded. If this is like all of the other times, I’ll need to find some way to get Brain free so that he can rescue Penny later. But how to do it?

Talking to the guard gives us a variety of conversation options ranging from asking to change seats to demanding that he let us go. He is a man of few words, mostly just responding to each question with a firm, “No.” Eventually, I work my way down the list to ask him for a glass of water. At last, he relents and leaves us alone to fetch us a drink. It’s nice that M.A.D. agents are so gullible! With him out of the way, we can lower the fold-up bed to allow Penny to climb up on it to pull the emergency brake. After a cute animation of Penny and Brain falling over when the train stops, we open the window to make our escape. Penny insists that Brain go first, but naturally our friend with the water arrives just as we are leaving. Brain escapes but Penny remains trapped with a wet and unhappy M.A.D. agent.

Moments later, Penny is tossed into what appears to be a dressing-room trailer at the local circus. Why bother even kidnapping us since Penny would have been happy to come here on her own? We explore to find Gadget’s laser finger conveniently located in a nearby cabinet, while the desk contains a lion tamer’s whip and Uncle Gadget’s roller skates. A trunk in the room is locked and we are unable to discern that secrets within. How do we progress? I try touching everything, but the solution is to apply some force: I shoot the laser at the trunk’s lock to melt it. Inside is a poster of Snarlov, the lion tamer. Penny deduces that we are in his trailer and that is enough information for Brain to track down which circus we are trapped in and where it might be located. This time seems like a reasonable deduction!


We switch to Brain who is standing in the middle of nowhere beside the railroad tracks. There is absolutely nothing for us to interact with here so we head right off to the city map to pay a visit to the circus. One minor bit of trivia here is that the circus we are visiting is one of the Moscow State Circuses, actual long-standing circuses that are famous tourist attractions. For having us come to an actual Russian cultural icon instead of some random location gets a plus in my book! Of course, the real Russian circuses looked nothing like this one… if anything, this seems to be an American-style traveling circus rather than a fixed one. Oh well, at least they had “circus” right. Although the sign here is in English, it’s not too bad. The Russian word for circus is essentially the same as the English one, except written in Cyrillic characters.

Brain is not allowed into the circus on account of his being a dog, but fixing that is easy enough: there are all the components of a clown costume scattered around. There is also (more strangely) a truck filled with nuclear materials here. I expect that will be important later. When we complete our costume, the ticket taker recognizes us as “Bofo the Clown” and lets us in.

Unfortunately, our escape route is blocked off by a lion who is now inhabiting the nuclear-laden truck. Is it a nuclear lion? Why can’t I just walk around him? I have no idea! But at least getting past him is easy enough when Penny uses the lion tamer’s whip on him. We are treated to a comical scene where the lion jumps in fright, hits his head on the roof of the truck, and then scampers away. Animal abuse? I’m not so sure, but the path is clear and we can proceed to the nuclear power plant.


Uncle Gadget is waiting for us at the nuclear power plant. Once again, his superior investigation techniques have led him to the correct answer. You have to give the guy credit; other than the time that he found the M.A.D. hideout by accident while having lunch, he has been fairly successful getting close to solving each of the cases on his own. Sure, we have to help him get over the finish line, but he’s doing much better than you’d expect. In this case, he’s investigating the “M.A.D. Nuke Plant” because he wants to find out what they are mad about. Idiocy or genius? I’ll let you decide. I will say one thing about this game, it’s not entirely above making fun of itself. After all my complaints in Brazil, this is now my favorite caption:


With dialog like that, it’s tough to stay mad at this game for very long. In any event, we give Uncle Gadget back his lost laser and roller skates and he runs off to investigate inside the building. He’s concerned that the nuclear plant does not look to be in good shape so there must be a safety inspector or something that he can talk to. With him gone, Penny and Brain can now use the convenient clipboard and clothing scattered around the room to help Brain become the spitting image of such an inspector. The security guy happily waves us inside.


The inside of the nuclear plant is quite a mess! Wires hang from the ceiling, panels are left open, and the electrical outlets are sparking. Gadget immediately grabs onto Brain to interrogate him on the state of the plant, leaving Penny to explore. There are some loose cables that we can’t seem to interact with plus an open panel that cries out for attention but then does absolutely nothing. All we can do is go through the red door to the reactor control room.


I have a feeling that you can guess the next part: inside the reactor control room is none other than Caetano Nascimento, one of the U.N. ambassadors. He is staring at some monitors chanting that “everything is fine” even though we can all tell that it isn’t fine. Penny can’t seem to wake him up directly, so we’ll have to see what happens when Gadget uses his gadgets. I try the roller skates first and while they do not help the situation in any way, we do get a brief humorous scene of Gadget struggling to stand while wearing them. I also try the laser, but that doesn’t do anything either. What am I missing? It takes me a few moments, but I eventually discover that one of the panels in the console can be opened. Once that is done, Gadget can use his laser to short out the panel and cause Caetano to wake up from his trance. Frankly, I am concerned that we’re allowing a shoddily-maintained nuclear power plant to go critical, but at least we rescued the guy, right? I’m just relieved that we only have one mission left before the finale. 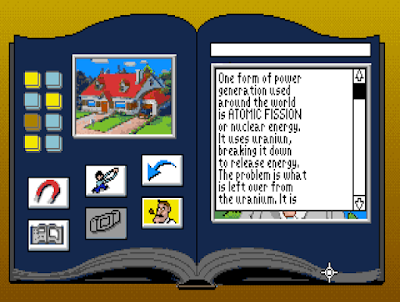 Our environmental lesson for the week is on the dangers of nuclear power and the difficulties of disposing of nuclear waste. Surprisingly, the episode itself did a very good job of representing this, from the truck containing nuclear waste (that they presumably had difficulty disposing of properly) at the circus, plus the poor state of repair of the nuclear plant overall. Given the incidents at Chernobyl and Three Mile Island (both of which are referenced in Penny’s computer book), the authors are making a clear statement about the dangers of nuclear energy. Actually, given the inclusion of the Moscow Circus as well, this is probably the most well-connected and well-researched of the locations that we have visited so far. Points for Moscow! 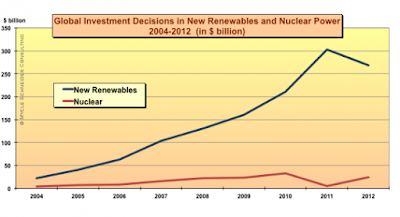 Nuclear power, once considered the darling that would move us away from fossil fuels, is largely uninvested in today compared to renewables. This certainly seems to have been helped, if I can even use that word for such a disaster, by the Fukushima disaster in Japan. I just hope that our remaining aging power plants are better taken care of than the ones in this episode.

That’s it for me this week. Next time, I’ll be off to Hong Kong for the last of the regular Gadget episodes. I hope!
Posted by TBD at 23:00