Lydia Sandler, Zeke Zarmen and Barthgub el Nikki-Nikki son of Jelgobar el Zayda-Zayda Journal Entry #3: The three of us went on our mission to Phobos to stop the Leather Goddesses' evil plans. To stop them we'll have to sabotage their plans both on their home planet and Earth. It'll be hard, but that's how we like it.

When we left off last time our heroes were in the spaceship about to land on the moon of Phobos. Due to Phobos' defenses, our landing wasn't exactly smooth


At this point, there is very little difference between which character we're playing, as the game plays out exactly the same, so instead of doing Barth and Zeke's playthrough at the end, we're just going to be doing it all in one go as Lydia, with one small exception where Zeke's line was funnier. Now, back to the game!

Barth's ship is destroyed, so we'll have to find another way off the planet when we leave. There were two places we could go to: the rocket field and the palace. The rocket field looks like it might be our way out of here, so we check that out first.


The palace consists of five screens. The outer door, kitchen and antechamber just take us to the two rooms we can do something in: the dungeon and the harem.


We release the legion of prisoners and Barth explains our mission. Prisoner #1 and Prisoner #2 (actual names) promise to create a diversion if we are pursued on the way to the shipyard. Looks like we may have solved the 'remove guards' part of our escape plan.

The harem is the place Professor Sandler's telescope zooms into.


Lydia noticed that the leader of the Leather Goddesses was a beauty, but with an obvious dark soul and wicked heart and that she despised her as her enemy. So naturally, I made sure she tried to kiss her.


After kissing a few goddesses (or doing anything else in this room for five turns or so) Melcinda sends me to the dungeon, where they'll kill me after they get back from conquering Earth.


Activating the invisibility doohickey that the Planet X council had given me, I once again went to the harem, where I could overhear the Leather Goddesses' plans. I used the Planet X recording device, which looks like a green vinyl record. I'm not sure how I was supposed to use the record, but I couldn't continue if I didn't use it, so I just waved it around clicking it on various goddesses hoping it would do something. My random waving worked though, so... yay!


Balfurra also mentioned that she had changed the access codes for the invasion fleet flagship, so we also had a way past the security system for the guarded ship we'd seen earlier. Now our escape plan was on the way.

After going through their plans, Melcinda is interrupted by Lubanna, who wasn't paying attention and asks for the plan to be repeated. This is a game device that simply avoids the possible dead-end of us not correctly using the recording device the first time we hear the plan, and is used in many games to allow us to hear important conversations if we missed them the first time. Once again, I appreciated the game not allowing me to get stuck and have to reload because I did things out of order.

Attempting to talk to the goddesses while invisible doesn't get us thrown back in the dungeon, but instead has one of our companions hold us back


So, armed with a recording of their evil plans, we now need to get back to Earth to warn our people. We return to the rocket field, where the prisoners we released earlier 'made a show' which caused the guards to take chase. That's all the game tells us, so what kind of show they made is left up to us. I expect some kind of cirque de soleil thing is likely.

Inside the spaceship, which looks a lot more roomy than the outside suggests (maybe it's a TARDIS), the only thing we can do is go into a closet.


Soon after we enter the closet, we hear voices outside the room, and the ship takes off. From now, for the trip back to Earth, we can't do anything except listen to the goddesses talking outside the room, or turn the sink on and off for no reason.

This goes on for a few minutes before the ship lands on Earth. After the Goddesses have left, we leave the closet, and then the ship.

We're back at the caryard, where we find the angry mob is still there, and they've been joined by some Leather Goddesses.

General Wedgypoo welcomes our new leather-clad overlords as saviours, and notices Barth has returned, likely with his armies close behind.

Zeke objects and tells everyone that it's actually the Leather Goddesses who plan to invade the Earth, but nobody listens to Zeke.


I'm still unclear about how convincing the General in any way helps you conquer Earth. His army consists of four people with guns and a handful of townspeople.

Surely with your superior technology (particularly in the anti-chafing department, one would think) one small town General laying down his weapons would make no noticeable difference to your invasion plans.

Anyway, in an effort to warn him, I tried using the recording device on the General and everybody else in the scene, with no luck.

A little bit of thought made the answer obvious to me, so I left the caryard and made my way to the radio station, where I've been previously to play various music from the game with the provided records.


After I started playing the recording, Zeke came in and told me that the mob had turned on the Leather Goddesses, and they had fled back to Phobos, abandoning most of their spaceships.

As for how they fled without their spaceships, I have no idea – perhaps they all crammed themselves into the same ship - I'm sure three of them would have fit in the broom closet. Anyway, we were heroes and Barth was chaired down main street like an extremely slimy sports star


Professor Sandler apologizes to Barth on behalf of his species, and Barth gladly predicts many future relations between our two civilizations before Lydia becomes a party-pooper and points out that with Barth's spaceship being a wrecked heap on Phobos, he has no way home. 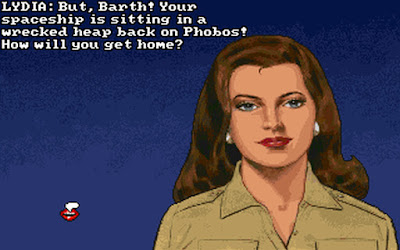 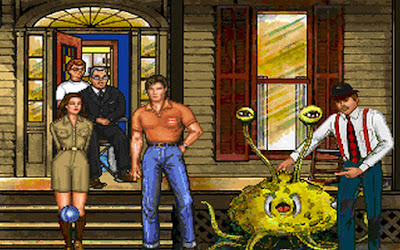 The Professor then goes on and on about the future of humanity and the infinite possiblilities and how together ... ... ... 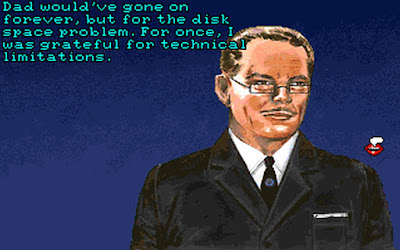 Then Zeke and Lydia kiss on the front porch as the camera zooms out from Lydia's house to end up in outer space, mirroring the beginning of the game.

After fading to black, we finally check in on the fate of the Leather Goddesses of Phobos themselves.


The game then hints at a third and final chapter of the series, which never got made, and based on the last shot would probably have involved them discovering a new fabric and becoming the Woolen Goddesses of Phobos

Considering it took me less than 9 hours to complete the game three times, this has been a very short game that certainly didn't overstay its welcome (Barth's child-shooting puzzle notwithstanding).

Thus ends the only full game I've played for this blog without asking for assistance. I enjoyed the game, though I would never call it 'great' or even 'good'. It's ... 'fun enough'.

Stay tuned in a week or so for the Final Rating. I for one am extremely interested to see how this game fares.
Posted by TBD at 23:00