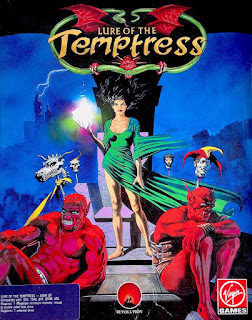 Lure of the Temptress, the debut game from British developer Revolution Software—founded in 1990 and still making games—promises to be an interesting piece of adventure gaming history. If Revolution Software sounds familiar to you, that’s because these fine chaps (that’s what they like to be called in England, I’ve heard) went on to create the acclaimed Beneath a Steel Sky, as well as the Broken Sword series. Having played none of these games, I am very excited to embark upon something for The Adventure Gamer that is not a Police Quest game, is not a Leisure Suit Larry game, and is not a Robin Hood game.

Written by Dave Cummins, designed and programmed by Tony Warriner and David Sykes, produced by Dan Marchant, and directed by Charles Cecil, Lure of the Temptress is a point-and-click, inventory-puzzle-based adventure game of the kind familiar to fans of games by Lucasarts and Sierra. It was very well-received upon release and is still hailed as a classic worth playing, though it looks like not all contemporary reviews have been quite so kind.

The game features Revolution’s Virtual Theater engine, used in the aforementioned Beneath a Steel Sky and Broken Sword games, at least the first two, in which NPCs follow their own schedules independent of the player. Think of it like a proto-Radiant AI, seen in games by Bethesda like recent entries in the Elder Scrolls and Fallout series, but with fewer arrows in the knee. 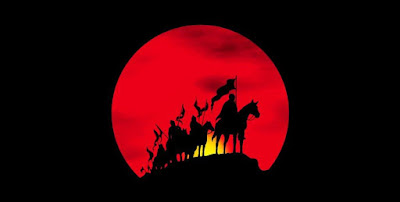 I’m looking forward to this one. With the exception of Robin Hood: The Touchstones of Rhiannon, Lure of the Temptress will be only my second non-Sierra game for the site. And after playing through the Police Quest I remake, which I had played before, but many moons ago, I’m going into Lure of the Temptress blind, which I’m sure will make for some exciting—and frustrating—playing . . . and reading.

What better place to start, then, than with the game manual?

I take it back: What better place to start, then, than with the box art? I mean, look at that! Damn, now that’s a cover that screams “Play me!” The alluring enchantress, those morose red demons, those heads on pikes (including a jester’s), all done in a classic comic book art style. It just tickles me right in the aesthetic zone (you don’t want to know where that is). I don’t know who’s responsible for this, but damned if they didn’t do a fine job.

Okay, back to the manual. It’s written from the perspective of some dude named Ratpouch, a loutish sort who explains the game, its interface, and the plot to you, the reader. We’ll get into the interface in the first gameplay post, but there’s no reason we can’t get into a rundown of the plot right now.

There’s a king, there’s a town called Turnvale in some unruly province that’s revolting against said king, and the revolt is spearheaded by an apprentice sorceress named Selena. How an apprentice sorceress is able to pull this off makes me think maybe she should be admitted to the ranks of the full-fledged sorceresses, but I’m no expert on magical rankings so take my opinion with a grain of salt.

Still, the king takes Selena seriously enough to visit Turnvale himself with a whole bunch of horsemen, including Diermot, the player character, in tow. The king doesn’t meet a regular bunch of rag-tag resistance fighters, but “an army of grotesque creatures, the likes of which have never been seen before” which are “hellish mercenary monsters known as the Skorl.”

The battle against the Skorl is apparently a “massacre,” in which the king’s horsemen are destroyed . . . and so is the king! Diermot, however, falls off of his horse and bangs his head—our hero, ladies and gentlemen!—waking up in a prison cell, where the game begins.

It’s important to note that, based on the tone of the manual, I don’t expect this game to take itself too seriously, despite the relatively straight nature of the plot. In actuality, this is intentional, as described by Charles Cecil in a 2012 interview with Edge:

“While I enjoyed Sierra games, I felt that there had to be more than yet again saving King Graham of Daventry from a – let’s be frank – fairly unlikely series of events. It was all a little bit twee. So we came up with the idea of writing an adventure game that didn’t take itself too seriously, but did have a serious story – something in-between Lucasarts and Sierra . . . Humor’s a very clever way of creating rhythm, rather than a monotone gameplay pace which can soon grate . . . “
So there you go: The first game by a top-tier adventure game studio responsible for many beloved classics in the genre, featuring an all new game engine with an intriguing NPC AI hitherto unknown in the genre that aims to fall in that sweet spot between Sierra and Lucasarts. Will it pull off that difficult balance of a serious story with funny bits, exemplified so masterfully in the Quest for Glory series? Or will Lure of the Temptress fall flat, failing to appropriately nail those contrasting tones resulting in a campy, cringe-worthy experience?

STAY TUNED TO FIND OUT!

I’ll be playing the DOS version on DOSBox, though the game was also released for the Amiga. And maybe I should take this as an omen of things to come, but according to MobyGames, there is a game-breaking bug that would ensure an unbeatable experience . . . that is, “unbeatable” in the literal sense of the term:’

There is a bug in the game which prevents you from completing it. To fix this, you have to choose the 'Restart Game' option, as soon as the game begins. If you don't do this, then at least one vital item (the tinderbox) will not appear.

Oh boy. I’d really appreciate it if anyone with knowledge of other bugs in this game could share them with me in the comments section below, before I really embark on my journey through the Skorl-infested town of Turnvale.

Note Regarding Spoilers and Companion Assist Points: There's a set of rules regarding spoilers and companion assist points. Please read it here before making any comments that could be considered a spoiler in any way. The short of it is that no CAPs will be given for hints or spoilers given in advance of me requiring one. As this is an introduction post, it's an opportunity for readers to bet 10 CAPs (only if they already have them) that I won't be able to solve a puzzle without putting in an official Request for Assistance: remember to use ROT13 for betting. If you get it right, you will be rewarded with 50 CAPs in return. It's also your chance to predict what the final rating will be for the game. Voters can predict whatever score they want, regardless of whether someone else has already chosen it. All correct (or nearest) votes will go into a draw.
Posted by Ilmari Jauhiainen at 23:14

Email ThisBlogThis!Share to TwitterShare to FacebookShare to Pinterest
Labels: 1992, Alex, Introduction, Lure of the Temptress