After completing the original Leather Goddesses of Phobos, I was very much looking forward to the sequel, not so much for the opportunity of seeing the aforementioned goddesses in all their VGA graphical glory (Mmmmm, pixelated boobies...), but because of a point-and-click mouse interface - no more parser problems

{I don't understand the word 'point-and-click'}


Infocom struck me as the adventure game equivalent to what Nokia were in the mobile phone world before smartphones became a thing. When graphics came along, Infocom seemed secure in being the best at the text parser adventure game rather than investing in all the fancy GUI and features.

Well, Infocom was bought by/merged with Activision in 1986, effectively shut down in 1989 and repurposed as a brand name for re-releases of old games in 1992. According to Mobygames, Leather Goddesses of Phobos 2 was the last game showing Infocom as developer, though Infocom was just a name at that point.

Steve Meretzky, after Infocom's demise, had been freelancing, largely with Legend Entertainment, as we've seen in the Spellcasting series. He worked with Activision on this game, which makes sense as the original was one of his babies.

The manual has something to say about Mr. Meretzky


As with many games of the era, Leather Goddesses of Phobos 2 was entering the world of digitized speech for the first time – the manual proudly mentions over an hour of recorded speech. The game actually came with some hardware that you plugged into the parallel port (and then plugged into your TV/Monitor/Audio system) for music/sound without having a sound card.


Lane Mastodon and the Blubbermen

Before this game Infocom had created an Infocomic that was tangentially related to Leather Goddesses of Phobos: Lane Mastodon and the Blubbermen.

It was released in 1988 and was, to put it simply, terrible. It wasn't actually a game, it was a graphic novel with CGA graphics and the only choice of interaction being able to at certain points swap view with some other character and see the story played out in their location. I 'played' it - it took about 30 minutes to watch and was just an unimpressive story. If you went to the trouble of rewinding to see the other character's views you'd get an hour out of it, but with no way to affect the story it doesn't have much replayability. The Commodore 64 version looks a bit better - or at least more colourful, but I can't imagine anyone putting this amongst their favourites.

Joe Pranevich will be likely delving into Infocom's Infocomics in the future as two of their other titles were ZorkQuest games, but for now it's time to get back to the game at hand.

Preface to the Story

The year is 1956. It's an election year in the United States, and Eisenhower and Nixon are running for re-election; Elvis Presley appears on the Ed Sullivan show, Rock & Roll is starting to shake things up and the Leather Goddesses of Phobos are once again formulating plans to invade the Earth and turn it into their private pleasure world.

The first time, twenty years ago, the Leather Goddesses were thwarted by an ordinary Earthman named Zarmen, who nobody believed.

Earth scientists suspect the existence of a tenth planet in the Solar System, called Planet X. As it turns out, Planet X is inhabited by a peaceful and technologically advanced society who are pawns in the Leather Goddesses' gameplan.

And on this night in 1956, a lone spacecraft crashes on the outskirts of town...

Before getting past the preface, it's worth pointing out that the existence of a tenth planet is unlikely seeing as we actually lost the ninth planet in 2006 when Pluto was found to not be doing its duty and was therefore no longer worthy of being called a planet. And even if there was a planet X, the 1956 scientists can't find it because it actually won't be discovered until the 24th and a half century...


The interface is a simple point-and-click one. The cursor changes based on what you hover over. If the cursor is an arrow, it shows the direction you'll move if you click, if it's a hand you take or examine, a mouth talks, an atom means there's nothing there and the Infocom logo means the computer is thinking

You have an inventory box in the bottom left corner, where you keep items and can use them on the environment.

When you talk to people icons on the left indicate the subjects you can talk about.


The manual contains a section on 'radiointeractive fiction' where it describes an adventure game as if this is the first adventure game ever made and these developers invented the concept of puzzle solving because they call it something different – weird.

One thing that makes me very happy is this part of the manual...


“Leather Goddesses of Phobos 2 has been specifically designed so that you can never paint yourself into a corner. You won't get killed, and you can't create a situation that necessitates quitting and restarting the game from the beginning.”

I'm very glad to see other companies are starting to follow Monkey Island's lead on this one.

The save game screen is a novel one - 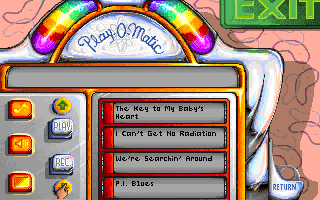 You don't get to name your own saves, but you have 20 slots. I wouldn't be surprised if the save names are involved in a puzzle at some point so I might as well list them here:
Preface to the Preface

The game's opening cutscene shows me highlights of my adventure in the previous game. 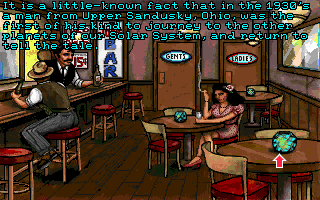 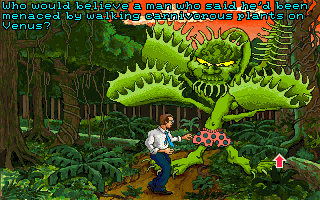 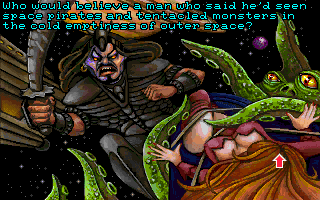 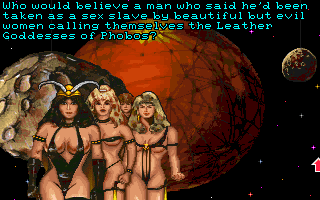 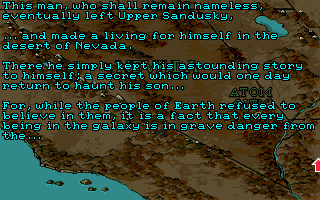 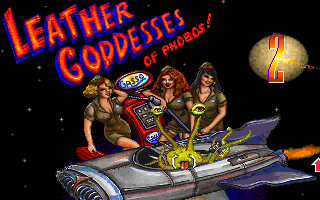 So, it seems the character I played in the original game was canonically a man (not surprising) whose name was Zarmen (first name or surname, I'm not sure) who ended up having a son who's in this game (perhaps Zeke, one of the possible protagonists of this sequel)

I at first thought it might be possible the character in question isn't me, but Trent and that Trent Zarmen's son will be involved in this game. But on reflection, I recall Trent telling me he came from Alaska, while I definitely started the game in Joe's Bar in Upper Sandusky.

Who Will I Be? 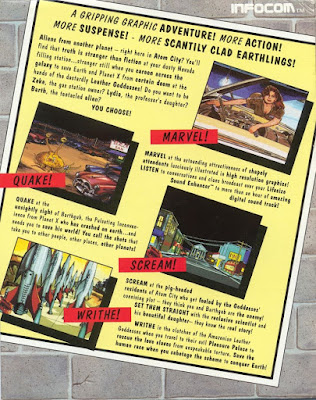 This B-movie looking, small-desert-town, pulp-fictiony, things-crashing-from-space thing is sounding eerily familiar... why do I feel I've done this before... and before that...

Oh well, it seems I'm the one we go to for this kind of game - might as well enjoy it.

As for the game, as soon as it starts I'm given the option of who to play with.

I'm including a poll along with this post as part of Adventure Gamer's patented ChoiceClicker (TM) technology so YOU can decide who I play with. The poll should be at the top left of your screen. 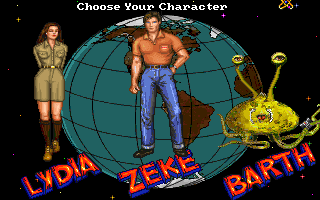 Here's what the characters have to say when I hover the cursor over them...
I'll be playing as all three for comparison purposes and posting interesting differences as I go, but the poll results will determine who I am for the main playthrough. So get ChoiceClicking (TM).

And don't forget to get your score guesses and any possible bets in. Here goes...

Note Regarding Spoilers and Companion Assist Points: There's a set of rules regarding spoilers and companion assist points. Please read it here before making any comments that could be considered a spoiler in any way. The short of it is that no CAPs will be given for hints or spoilers given in advance of me requiring one. As this is an introduction post, it's an opportunity for readers to bet 10 CAPs (only if they already have them) that I won't be able to solve a puzzle without putting in an official Request for Assistance: remember to use ROT13 or some other appropriate cipher for betting. If you get it right, you will be rewarded with 50 CAPs in return. It's also your chance to predict what the final rating will be for the game. Voters can predict whatever score they want, regardless of whether someone else has already chosen it. All correct (or nearest) votes will go into a draw.