It is time for King Brandon’s adventures to be tested and thoroughly examined through the PISSED rating system. Will the beautiful universe crafted by Westwood be enough to forgive some lacklustre puzzle design or will Kyrandia disappear into the depths of our leaderboard? Let’s find out! 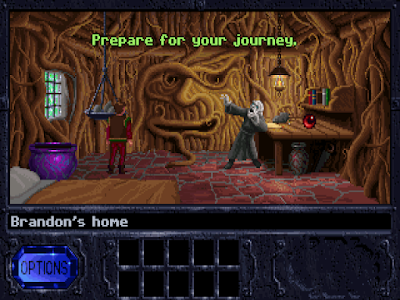 Ok so let’s get this out of the way : some of the puzzles in this game are rubbish! Let’s examine them in further details :

The rest of the puzzles are pretty nice. I know a lot of people hated the maze but I kinda liked it. At least it makes sense and consistent mapping is the answer. A few areas requiring pixel hunting are bothersome and there are a few possible dead-ends. However, the magic powers and a few simple puzzles are pleasant. The final fight is also kinda anticlimactic.

Final Score: 3. Alternating between okey and meh. Would have gotten a 4 if not for some bells.

The interface is extremely simple to say the least. One click does it all. Click on a character to talk to him, click on an item to take it, click in your inventory to take an item and then click it on something else to interact. Put your mouse on the side of the screen and it changes to a nice white arrow if you can move this way or a mean crossed red circle if you can’t. The magic powers settle comfortably in the bottom-right of your screen once you get them and everything is kept as straightforward as possible. The only complaint I have is that there is no “look” option which could have been useful once in a while.

The inventory is great. When you grab an item, it goes nicely into one of the little boxes and dropping an item somewhere makes it bounce on the screen. That’s something that will be perfectly realized in the sequel, where the inventory has a real “physical” feeling, but there is already something satisfying in managing items that feel like they have some kind of weight. The only complaint I might have would be with the limited inventory space (only ten items) but it avoids the feeling of being cluttered by items you can sometimes have in the sequel. All in all, very nice streamlined work there.

Story and Setting
The story itself is your classic “castaway prince in search of his parents/princess/heirloom”. As you guys noted, it bears many similarities to King’s Quest and it’s aware of that. It goes with the “let’s take someone else’s idea and perfect it” that goes with many of Westwood games (Eye of the Beholder is a more advanced copy of Dungeon Master while Command & Conquer is a new take on Dune 2, which is itself inspired by Herzog Zwei) and it’s alright. I mean, Blizzard has been doing the same thing for years...

Kyrandia has yet to find its complete silliness that will permeate the two sequels and is more akin to a classic fantasy world, even with a few touches of silly here and there. The fact that nearly everybody you meet knows Brandon and his destiny is a nice touch as well that gives backstory to the world. Malcolm is a great villain, and if anything, he doesn’t get enough screen time. I wanted to see him blow other squirrels up! The perfect graphics and sounds (more on that later) add to the atmosphere and round up Kyrandia as a very loveable setting.

Final Score: 6. Too much classicism for its own good, but classicism done right.

Well you have seen that one coming. As you already know or as you can see from the screenshots, this game is gorgeous. It’s a testament of how fantastic 2D graphics hold the test of time. Compare this game to 3D games of the same era, and the difference is astonishing. This game was released the same year as Alone in the Dark…

The art style is top notch and is one of the main reasons the game is still highly regarded as one of the great classics of adventure gaming. Getting lost in Kyrandia really feels like an adventure and you never know what fantastic sight awaits you behind the next corner. The sequel would keep on improving in this area but the third episode will be marred by the beginning of 3D effects and doesn’t look as great in comparison...

And the music… Oh wow the music. It’s the perfect blend of adventuring and mystery. It oozes “magic” with its tunes only. It’s hard to imagine Frank Klepacki, the composer, was only 18 at the time! It’s saying something about the talent of the guy. He would later go on to compose the Command & Conquer soundtrack including the fabulous “Hell March” for Red Alert. This guy is my new hero. Anyway, I can’t tell enough good things about the music. Just listen to the Timbermist theme and you’ll understand what I’m talking about…

The environments of Kyrandia, being served by such a great art style, are top notch. Brandon evolves in lovely forests, mystery caves, and a frankly frightening derelict castle. All of these places ooze style and magic. Add to this that every environment has its own music theme, and you’re always evolving into fabulous environments.

Despite its classicism, Kyrandia is wonderful. What the sequels will gain in silliness, they will lose in coherence. Zanthia and Malcolm’s future adventures will bring them to all kind of weird places but at least this first vision of Kyrandia makes sense. Dragons, imps and magic are common things and everybody is living their quiet lives in this world until some maniac jester decides it should be otherwise.

The only criticism I have to make is that, by the time you’re done with a specific environment, like the forest or the cave, this one has started to overstay its welcome. By the end of the game, you don’t want to see another generic forest screen and the idea of returning into the caves can make you shiver. Other than that, this is another area where Kyrandia shines.

Final Score: 7. Classic, but coherent, this vision of the world of Kyrandia is the more to the point, despite being a bit too serious or repetitive sometimes.

The dialog in the game is mostly funny. Be it the crazy old Darm bickering with his dragon Brandywine, or the perfectly grim jokes made by Malcolm, they do much to flesh out the game. They are quite short and to the point, even a little too much sometimes. Once a character has said his lines, there is no getting back for further questioning. No dialogue choices either, which is not necessarily a bad point, but you can sometimes feel a little lost due to lack of instructions.

All the characters exist in some manner. Malcolm is dangerously mad. Zanthia is tired to be the only semi-competent wizard around. Darm is completely senile. Herman is absent-minded, etc… the only sour point being Brandon. He spends his time moaning and complaining to the point where the routine starts to be tiring instead of funny. And his voice actor is not doing anything to help there (see the perfect transition to the voice acting…)

So voice acting, hey? Well, the voice actors are mostly competent, with everyone doing their jobs. Malcolm tends to stand out, but it’s always easier to act the part of the crazed clown with a few great lines. The voice actor for Kane/Brandon, though, is always whining and ends up being just irritating, which is a shame, considering he is the voice you’ll hear the most during the course of your adventure. Nothing worth cutting the voices though. And Brandon as a character totally redeems himself by punching Malcolm in the nose.

Final Score: 5. Nice lines and to the point, but lacking somehow. And Brandon needs to stop whining all the time!

Hence, the final score is (3+7+6+9+7+5)/0.6 = 62! Just a few points short of entering the leaderboard. I don’t know how I feel about that. It’s a great game, great ambiance and good memories, but in the meantime, its shortcomings in the puzzle department more than justify this score. Take the exact same puzzle design with graphics and sound a little less memorable and Kyrandia would have disappeared from adventure game history with a lot of his competitors. Now it sits there, firmly in the 20-something best games of our blog, but below Space Quest IV or Indiana Jones and the Last Crusade and it feels like this spot suits it.

Raifield and Fry, congratz, you get CAPs! Also worth noting is that Charles nailed the second Straight of the year. 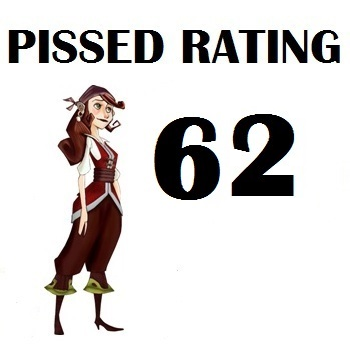 Thank you for reading and thanks to all the followers and Kyrandia fans out there, proving that this game still has a bright future among retro adventure gamers. Let’s hope there will be many more people yelling at the Birthstones or the Bells puzzle in the next 50 years!

Here are some CAPs for your troubles, now:

3 CAPs for Voltgloss
3 CAPs for Seabadger
-10 CAPs for Jim Walls
Posted by Ilmari Jauhiainen at 23:00