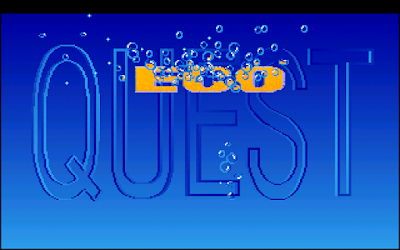 EcoQuest will be my first "normal" adventure game for the blog. Castle of Dr. Brain was a puzzle game primarily, and Timequest was a text adventure with a few graphics. But not only is EcoQuest intended to be an easy game, since there's no way to die or cause an unwinnable state, but it's also a game with an agenda: environmentalism. So maybe it's not such a normal game after all.


Published by Sierra, it was the last of their "quest" series (preceded by King's Quest, Space Quest, Police Quest, and Quest for Glory, which all began in the 1980s). There were two different releases of the game, an original floppy version and then a year later a CD-ROM version with speech. As we're in 1991 and generally examining the original versions of games, I'm going to be playing the original version. The controls are standard Sierra point-and-click, with the addition of a Recycle button to collect trash.

The player controls Adam Greene (even his name is meaningful) as he helps his dad with various sea animals that have been harmed by the careless use of chemicals or equipment. But the quest really begins when a dolphin starts talking to him, asking him to help save the deep-sea community of Eluria. While talking animals are hardly realistic, this is one of the more serious adventure games in tone due to the real environmental issues illustrated by the plot.

Sierra wasn't just being preachy, though. Right on the box, they announced that a part of the profits would be going to the Marine Mammal Center. Plus the game originally shipped with a small book intended to give kids more ideas for how to be environmentally friendly. This was published in the same era when other forms of environmentalism were becoming popular. "Reuse, Reduce, Recycle" and other slogans were being taught to schoolchildren, and recycling programs were in their infancy. Nowadays recycling metal and plastics is standard practice in many areas. So as part of the analysis of the game, we'll have to see how much the environmentalistic messages are still applicable.

There's even an "Econews" pamphlet instead of a normal manual, containing a number of fun tidbits, including letters between Adam and some of his friends, a crossword puzzle, sea-themed jokes, and more. This must have been a fun game to design and produce.

Ken Williams is credited as Executive Producer, and the main design was by Jane Jensen and Gano Haine. The latter didn't do much beyond the second EcoQuest game, Pepper's Adventure in Time and some Dora the Explorer games later on, but Jane Jensen went on after EcoQuest to do design work for a number of other familiar games, including King's Quest VI and several Gabriel Knight games.

The animation is beautifully done and the dolphin's quest sounds intriguing. I'm looking forward to diving into this one with you all. It looks like a good balance between cute and serious.

Email ThisBlogThis!Share to TwitterShare to FacebookShare to Pinterest
Labels: 1991, EcoQuest: The Search for Cetus, Introduction, Reiko