Dirk Gentley Journal Entry #5 "Dust on my boots, on my cap, on my jacket… Even in parts where the sun doesn’t shine. And not the good kind of dust. The one that reminds you of the journey you have left behind. No, bone dust from killing an army of undeads. And avoiding ghosts. And travelling through a dungeon of traps. And even convincing a powerful necromancer that his food had made me sick. And here I thought I had finally rescued Elvira, it was just another spawn of hell. I went to the earth’s core and I only got a lousy Indian holy lance. Well, I guess it is time to stop complaining and go back to work."

After all the work done to get to the lance, the dungeon still had a surprise for me. Just after going back to the church, an evil force prevented me from moving and something that looked like an skeletal angel with a scythe killed me. So much for finishing the catacombs. Reading the library entry for this monster, it is an angel of death that can kill with just one touch. Apparently I really pissed someone off down there because it is supposed to be one of the most dangerous evil entities. As there was no information regarding how to kill it or protect me from it, I took a look at the spell book just to discover the Unholy Barrier spell, that protects you from these eventualities. The price? A simple prayer book. I took good care of not using the one dedicated to the deceased father Callahan but the one I found in the mansion.

The spell prevented my death, however I wasn’t able to hit the monster back so I had to resort to throwing fireball and drinking mana potions like there was no tomorrow and eventually the beast died. A very unsatisfying death for a monster that made me traverse the dungeon three more times because I wasn’t carrying the prayer book and had to restore to a save before the last trip into the catacombs.

With that solved and the lance with the other key items, I resorted investigating the last set: Kiss of the spider queen. This set is another dungeon, this time disguised as a vertical shaft that we must climb and filled with giant insects. Lucky for me, these insects are quite easy to kill by this point and no spell was needed unlike my first steps in the catacombs.

Just right off the start of the level I found a lift. I was able to turn the electricity on and even call the elevator to the first level. However, a gate prevented me from entering the elevator. On the panel of the elevator there was a keyhole, so I just supposed that I would find the key later on and continued my exploration.

The dungeon has four levels and very few traps or obstacles. The first one are several webs that block the path but that can be destroyed with ice darts. There are also several rooms composed of several squares that contain quite a few giant worms. These rooms usually contain mushrooms or crystals. I haven’t found any use for the crystals (I guess I could make more detect trap spells…) but the mushrooms are very useful. Specially because some of them are poisonous and can be used to make antidote spells. And now I really wish I had come here in first place instead of going to the graveyard.

There are three types enemies in these tunnels. First we have the mosquitos, which despite their real-life counterparts, are not that annoying and quite easy to kill if you hit them in the trumpet. The next one are grubs. They hit quite hard, however they attack very slowly so it is easy to kill them before they hit you. I am very surprised with the difficulty drop and not sure if it is due to the change of set or to my level but this part is a breeze compared to the catacombs. Last enemies are the ants. I think one of the mushrooms makes them ignore you, but in any case they are not that difficult. However, they are the core of the other type of room in this set: 1-square rooms that contain one mushroom that you can only take after fighting a weave of ants and their larvae. And I should note that there is one larva, almost at the end of the weaves, that will always hit you because you can’t hit it, which seems a bit unfair all things considered.

The first unique scenario and one of the puzzles of this set is a lake. We can dive into the lake and die horribly of asphyxiation. Nothing that the breathe underwater spell can’t solve. Once the little oxygen problem has been solved, exploration of the lake is available. Lucky for me, Horrorsoft righted their wrongs and didn’t make another “explore the dark deeps of a moat” section. We can go down or up. So it is pretty simple. Just about halfway to the bottom I was attacked by a nymph, a giant underwater bug, which was not a problem. The problem came when I hit the bottom. There is a rope there, but the moment I tried to go up I was greeted by a message saying that I was carrying too much weight to swim upwards. Dropping everything was no help, as the message keeps appearing and killing the nymph became more difficult. The answer again is in a spell. The buoyancy spell more specifically, which allows carrying more weight underwater. That’s pretty specific. The ingredient is the remains of a marine creature, which I got from the catacombs. So there you go, a reason to go there beforehand. I am not sure it was worth it.

There is also another location with a waterfall and what seems to be the other shore of the lake but I didn’t manage to do anything here. Following the labyrinth we reach an ascending tunnel that took me to level 2. This level is almost identical to the first one but for two things. The first one is a giant scorpion guarding a scroll of binding, which is needed in the Bind Demon spell which is needed for the ritual to vanquish Cerberus. The other location is a hole into a vertical shaft that allows us to look up to a gargantuan web with a body there.

Level three is the home of the ant queen. It is just a bigger ant guarding another mushroom. Killing ants gets boring quite fast. This level also contains a pit trap. I think the developers included it here just for the good times, because otherwise it is a completely pointless trap in a tunnel that leads nowhere. The final interesting element in this level is that the final section is separated from the rest of the level by the vertical shaft we saw in the previous level. Crossing the chasm is a matter of choosing the right web thread.

The final level is mostly uneventful. There is just one relevant thing here, and it is of course, a giant spider. Well, that and the corpse of the director. His corpse is fixed to the wall with webs and a key is clearly visible on his pocket. However, we can’t reach it. The telekinesis spell does the trick and the elevator key is now in my possession. We can also see the spider from here across the immense hole. And here comes the tricky part. As far as I know, we can’t kill the spider, which is trapped at the other side of the elevator shaft. With the key we can open the elevator and get to her, but being unable to kill her - that is pointless. The trick is throwing a spell at her from the director’s corpse to catch her attention and then run to the elevator.

And finally, we can drop to see the body in the web. Which is no other than Elvira. Well, it is actually another mock. This time the body transforms into a wasp of the gigantic variety trying to sting us to death. After defeating it, Elvira comes to mock us again and then we find the tomahawk lying in the web. Two down, one to go. 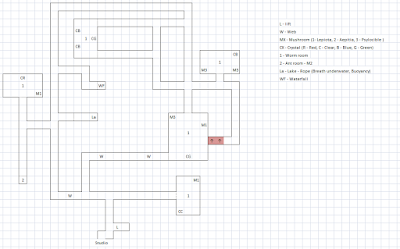 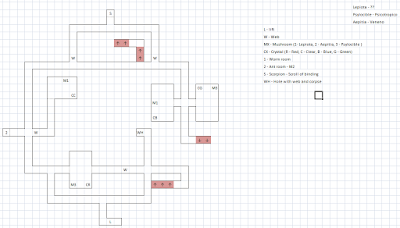 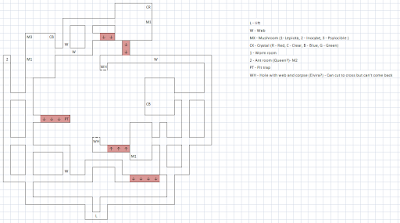 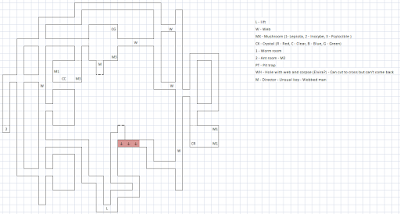