Martian Memorandum - There and Back Again: A P.I.'s tale

Tex Murphy Journal Entry #4:  I've spoken to Big Dick and been locked in his office. Fortunately I found a vent and escaped. After questioning other citizens of Mars I realised I needed to go back to Big Dick's of...

Before I leave Earth via the smuggler's base I return to the jungle for a seemingly innocuous and nonsensically buried newspaper advertisement. This ad somehow opens up many new avenues of investigation. I'm sure I'm now on the right track in my search for Alexis Alexander.

Last time I controlled our hero, Tex Murphy, I was killed by saying the wrong things to Big Dick.

So I went for my usual 'systematically try each possible option of dialogue until one works' process.

The way I do it made this the easiest dialogue 'puzzle' to solve.

I started with Response 1, then chose Response 1, then Response 1 again, and I'd suddenly won the dialogue on my first attempt! Thumbs up for Murphy's System for Dialogue Organisational Success! I should trademark MSDOS immediately.


LOOKing at everything in the room gives me a lot of Big Dick jokes and a Honeywell Computer Access Card, which I take.

I can't leave via the door.


Next to Big Dick's picture is a vent. Fortunately I don't need any items to open it, so I do open it and get to the dreaded Duct Maze.


I tried to use the map to navigate my way out, and a few times I thought I had it, but each time turns appeared or didn't appear when I expected them. After only six minutes, I found myself in the bathroom without having fully worked out the map system. Well that was fairly painless. I was really dreading this maze, but I can easily accept six minutes of fumbling around.

I decided to visit the other locations on Mars that I'd discovered back on Earth.

First stop, Dr. Lawrence Barkley. His secretary lets me in and tells me the doctor will be in shortly. I naturally try to take everything in the room.

After I finish questioning him, I can continue to search his office. I find an empty safe, but nothing else of interest.

As I attempt to travel, my comlink beeps with a message from Mac Malden 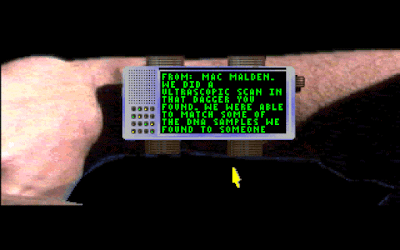 Next, I take a trip to the Power Plant


Ferris tells me that there was a rumour that Alexis came to Mars a few weeks ago but noone has found her yet. He also mentions that with Marshall Alexander dead, perhaps Lowell Percival will be calling the shots up here instead. That's perhaps a motive, or perhaps just flavour dialogue.

After speaking to Ferris, I go back to the entrance and use my new security pass to open the door to the Restricted Area.

A huge liquid cooled, super conductive electromagnet pickes up martian rocks and deposits them in a large oxygen catalytic cracker, which processes carbonated rock and iron oxide from the Martian surface into liquid oxygen, which then gets processed into a supercooler for the freed oxygen. It's all straightforward stuff - if you don't understand any of it, it's time to brush up on your terraforming science textbooks.

I pick up a monkey wrench on the ground, and stand on top of the trap door to see if I can get killed.


Time to visit my last location in Mars – Lowell Percival. Lowell won't tell me anything until I get something from him.


I make my way back to Big Dick's and go back into his office. I don't last long.


I reload back to before entering Big Dick's office back in the last post, and visit the other locations first this time, asking them about all of my topics, getting the wrench and Orange Box (TM). Then I go back to Big Dick's office. Knowing he has a safe, I search his office in greater detail. I notice I can MOVE the light aboove his painting, which reveals a passageway.

I enter the passageway, which is much larger than it seems, and find an alarm control box.


I expect death, but what kind of adventurer would I be without trying anyway. I step on what is apparently one of the pressure sensitive pads.

I find a place where I can avoid the pads, but when I keep going I find the second obstacle.


Figuring I must have missed something, I reload (again) and go back to the power plant, as that was a place with three explorable rooms so the most likely place I missed something.

In the restricted area I have a thought: What if I can get myself attracted to the giant magnet?

I try using my wrench on the magnet. It takes a while to time it correctly, but eventually...


At the end of the catwalk I find a crate, which contains some interesting items.


Opening the door at the top takes me to the previously unopenable door at the bottom. I leave the room and get myself captured in Big Dick's office again. When I get into the secret passageway, I use my new hoverboard.


Reloading AGAIN, I think of what I've seen. I remember when I recently played along with Space Quest IV how I got through a laser security system and I also remember looking at some ashtrays in Big Dick's Casino. Looking at one of them again gives me a deja-vu inspired idea...


I have the same problem with the other ashtray which instead contains a smoldering camel filter cigarette. I can't click on anything specific in the ashtray, but trying to GET the ashtray does nothing for me. And I was sure that would be the solution. I still think making something smolder is the solution. I try doing something with the paper in the bathroom, hoping to direct some smoke into the ventilation system to smoke the security room, but no luck there either.

Also in the bathroom I can open the vent with my newly aquired allen keys (another entrance to Big Dick's office? Perhaps I didn't need to reload so far back earlier) and I notice that trying to MOVE the mirror get a strangely placed but somewhat amusing Blonde joke. 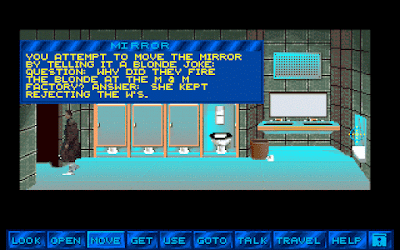 I decide I need the HELP system so return to the secret passageway and try it out..

Pressing HELP on the same thing again this time gives me a further clue.


I've never met or heard of Bradley, and going back to a comment Fry (my conscience again) had made on my last post about me possibly being dead-ended, I wondered if I was stuck.

The first clue translated as:
Why no, Fry. No I don't. I didn't even know there was an Aerobics Academy.

Time for the next clue:
I read this hint and sat there for a while taking it all in. I think about all that I've accomplished since the jungle hut – the return of the quicksand maze, the smuggler's base, Lawrence Barkley's office, the power plant, Big Dick's Casino including the vent maze. I'd have to do ALL this again.

At this point I'll admit I became a little annoyed at the game.

I've had enough of this game about investigating the kidnapping of a major character's child that takes place in post-apocalyptic America. I'm playing Fallout 4 instead.


After taking a small break from the game, I get back into the action and reload back to a save outside the smuggler's base. 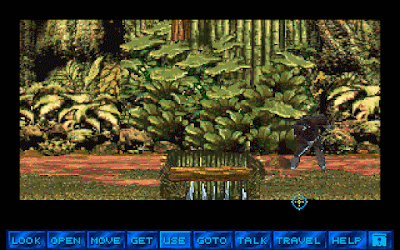 MEANWHILE, BACK IN THE PRESENT:

At the Aerobics Academy I see Jane Mansfield running exercises in the corner, so I TALK to her. She is clearly a friend of Alexis, and among other things tells me that Alexis hasn't been to Mars for a year.


After speaking to Jane, the receptionist is no longer behind the counter, so I take the opportunity to rummage through a purse that's sitting there. The only thing useful is a checkbook with Jane Mansfield's home address. I think you can guess where I'm going next.

I move the couch pillows and find a note.


After reading the note, The game decides I need a hint. “Why did Jane lie to you? Maybe if you had proof Alexis was here, she'd tell a better story.”

So I need to return to Jane. Thanks, Access!

Before leaving, I take the letter as proof and open the closet and find a suitcase with "Alexis Alexander" written on its name tag. I also turn on the TV.


And now I'll stop for the day. The next port of call will be to go back to Jane, visit the Deacon, talk to all the people, go to the locations I did last time, then go back to Big Dick's office and get captured like I did two posts ago. Phew!


Inventory: Gun, Cash, Comlink, Paper, Boots, Keys, Remote Control, Food and Water, Flashlight, Letter, Film. Since my previous post, I've lost my shovel by digging in the jungle, and lost my Big Dick Card and Blueprints because I didn't get them yet after my reload. But I've gained a letter from Alexis.