Martian Memorandum - Men are from Mars, Women have no... well, women are also from Mars

Tex Murphy Journal Entry #5: I found out a LOT of information from the two women I met on Mars (and I thought women were from Venus.) Jane told me plenty but Deacon Hawke was full of information. Not only that but I found a Martian Memorandum and some vital information on my client, Marshall Alexander.

We start today's episode with another flashback, where I repeated some more things I'd done earlier before reloading.

… I visited Dr Barkley, took his Orange Box (TM), asked him about everything, went to the Power Plant, spoke to “I'm a PC”, got the pass card, used it to get to the restricted area, took the wrench, used the magnet to get upstairs, got the hoverboard, spoke to Lowell, went to Big Dick's, got Big Dick Card, went to bathroom, took Blueprints, then instead of going to the office went back to visit Jane...

Now that Jane will give me more information, I ask her all my questions again. 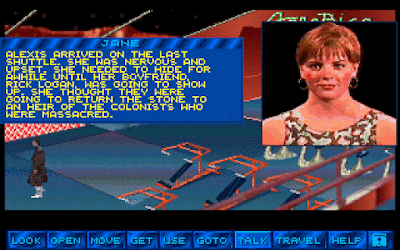 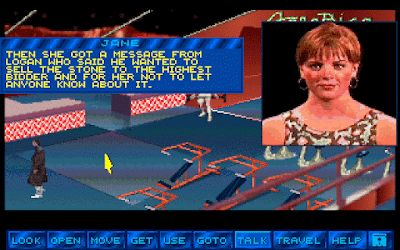 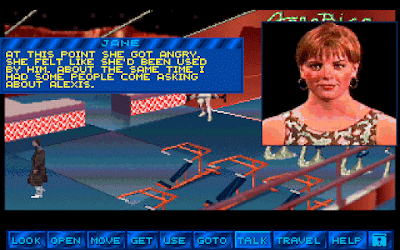 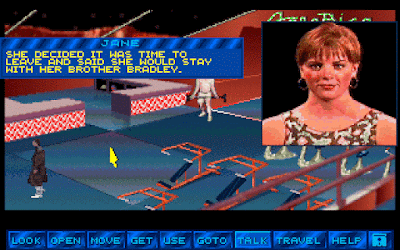 Next, of course, I visit Alexis' brother, Bradley.


Bradley was given away on birth to a mutant family. He's angry that Marshall abandoned him and wants his share of the estate. He claims he plans to give his share to the mutant community.

He also knows that Alexis stole the Oracle Stone from dad. He seems a bit suspicious of Deacon Hawke's motives. He also tells me that Big Dick has a big safe where he holds secrets on important people of Mars and when Dick found out Bradley was Alexander's son, he tried to get something on Bradley.


As I leave, Bradley tells me to keep looking for his sister because he know she's in danger.

… I go to Big Dick's office, talk my way into Big Dick giving me time and for some reason leaving me alone in his personal private office with a hoverboard, laser-vision glasses, his security card and a whole heap of other stuff I can use to pry into his personal business, get his safe card, then I MOVE the light, enter the secret room, USE the hoverboard and this time, can see the lasers... 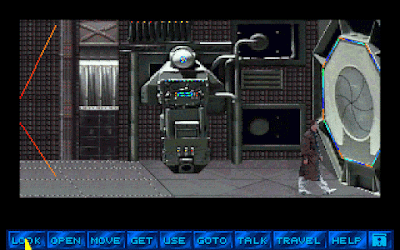 The large machine to the left is a scanner. It's set to scan Big Dick's eye. I have a Big Dick card, with his face on it, so I try to use that card on the scanner. 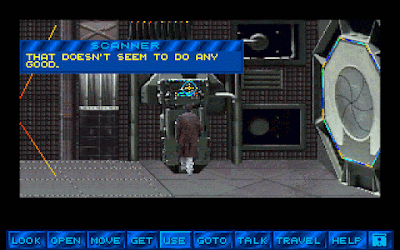 I quickly try to think of another idea, as I'm guessing dawdling too long results in death. I notice in my inventory I have a 'FACIAL KIT'


The safe opens and in it I see a MEMORANDUM. 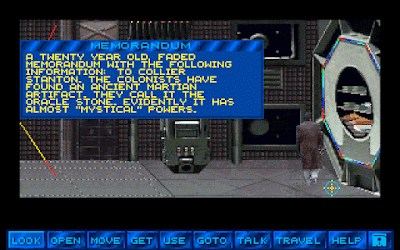 I also find what Lowell Percival wanted me to get.


I take Percival's markers, I also take Dick's 120,000 in cash, but can't take his stash of cigars and drugs, and of course I take the most important item in the game...


Now I'm hoping I won't have to dodge lasers on the way back, but feel confident that the game won't let me off easy.

My prediction came through, and after dying four more times, I finally made it and...


Obviously by taking screenshots I've slowed myself down and my 10 minutes are up (the things I do for you people.)

So I reload to back outside the office, talk to Dick, get the card, move the lig... hover towards the safe (die 6 more times), USE card on ... hover back across the laser maze (die another 6 times – at least I'm consistent), leave secret room, open vent, navigate vent maze, leave Casino, phew!

The vent maze was a little easier this time as I ALMOST have the hang of the interface.

As I leave the casino on my way to visit Deacon Hawke at the Temple, I get another Tex Murphy summary of what we've found out lately. I like the way the game tells me I know something before I really know it. Tex is clearly a better detective than me. The clues were all there – Stanton's murder spree and Alexander's mysterious plastic surgery, plus the mystical Oracle Stone and a few more clues I've forgotten along the way. I just didn't put it all together until this point.

The Temple is actually an ancient temple built centuries ago by Martians. The current inhabitants made a few renovations - the security fence and Honeywell intercom system are definitely new additions.

As I approach the gate, Deacon appears.


She tells me that my coming was foretold. Unfortunately she still won't let me in because the prophecy states that knowledge can only be given me when the light returns to its source...

I try to explain that prophecies aren't in my job description but she won't talk to me any more. It seems I need to return some light to a source.

Now that I've gotten Big Dick's safe contents, I visit Lowell Percival. With more than $500,000 worth of information, he'll now answer my questions – and if he doesn't give me $500,000 worth of answers, I'll definitely be asking for change!


Percival also tells me that Rick Logan offered to sell him the Oracle Stone, but he doesn't need magic to help him so he declined. He derides Deacon Hawke's plan to build a society based on the long dead Martian customs. He does give me a new lead. Apparently a bouncer at the casino called “Rocky Bulwinkle” might be able to help me find Alexis. Rocky goes some place near the casino after work.

I leave Percival and go to the outside of the casino - after a few seconds a man (who is presumably Rocky) walks out and into the alley. I follow him.


Trying again, I this time hide behind a pipe and see Rocky open a secret door. Entering the door I see a familiar face.

Looking back to our Mean Streets post, Larry Hammond seems to have been doing fine, but Darrell's a bit worse for wear as well as swapping sides. 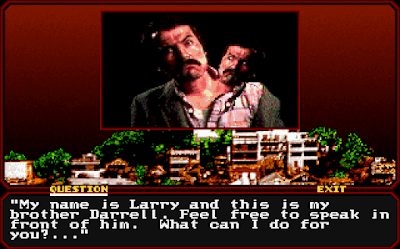 Larry gives me an amulet that will make Deacon more likely to talk to me, and gives me the address of Nathan Bloodworth's wife, Michelle.


With my new amulet at the ready, I travel back to the temple, and find the gate open. I enter...

With Deacon being held prisoner by a thug, I walk across the room wondering if I'll be seen and shot by the 'Bad Guy' but I'm surprised to make it alive. Martian bad guys have nowhere near as good vision as Earth's smugglers.

The extinguisher falls and makes a loud sound. The bad guy fires his laser at the sound. Because I'd moved the mirror, the shot bounces off, but then he shoots again.


It's pretty obvious what I need to do now. I reload and this time move both mirrors before attempting to move the extinguisher.


Interestingly, LOOKing at the bad guy and priestess still give me the same message about him prodding her and demanding she talk. I try to TALK to the dead/dying bad guy, but get a “The Creep Spots You” message and die myself. This is clearly an oversight - something the designers just didn't expect people to do.

Note to future designers: Adventure game players will try EVERYTHING!

I talk to Deacon (without untying her due to the graphic not changing) and NOW she'll talk to me.


She tells me that Stanton and Alexander are the same person, but I already knew that. She says that Stanton's lust for the power of the stone drove him to commit genocide – he DID seem very worried about it missing – now that I think about it he WAS just a few steps short of calling the Oracle Stone “My precious”.

She confirms that Rick Logan had attempted to sell her the stone but was killed before she could respond. She believes Alexis is now being held against her will, and that one person who may help me locate her is Cooper Bradbury – who is the leader of the mutant faction on Mars.

She really has a lot to say about the stone. 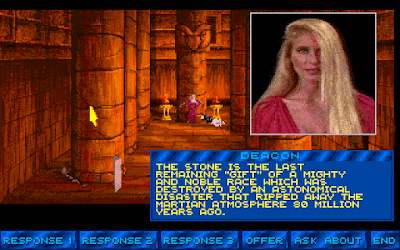 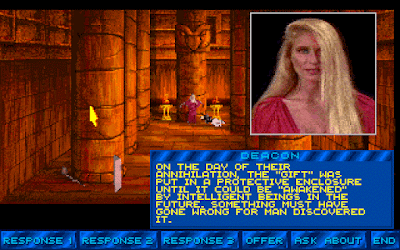 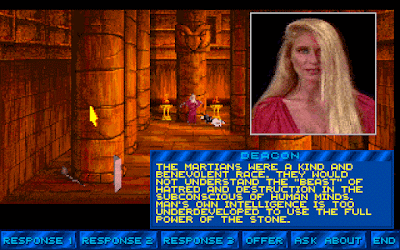 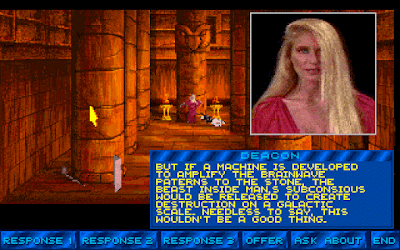 She also has a fair bit to say about Thomas Dangerfield.

Dangerfield was an archaeologist with the Stanton Expedition. He heard about the colonists having a valuable artifact, and advised Stanton to try to buy it. They wouldn't sell. That was when the massacre happened. Dangerfield took no part In the massacre and threatened to inform the authorities. He was shot and left for dead but is still searching for the stone and Collier Stanton.

Important safety tip: If your boss kills a bunch of people who aren't endangering the lives of others, don't THREATEN to inform the authorities - get yourself to the nearest cop station as fast as you can!

She tells me that if I do find the stone, I must give it to her for safe keeping and gave me the location of the destroyed colonist's camp so I can search the ruins for clues.

Phew! And at the start of this post I thought Jane had given me a lot of information. Deacon is a definite Ms. Exposition.

With all that information to take in, I think it's time to end our post. Next time, I'll visit the Martian colonist ruins, Michelle Bloodworth and wherever the clues take me afterwards.