So this is what it feels like to be a highway patrol officer!

After booking crazy Brian Forbes, Sonny gets called to Highway 41 near the 7th Street on-ramp to help Officer Morales with a violator who refused to sign their citation. Apparently, such a situation may require a supervisor. Whipping out, I mean, opening the PDF of the game manual, I check out Section III, Traffic Officer, Part 12: “Refusal to sign a citation.” Anyone refusing to sign must be advised that a signature is not an admission of guilt but only a promise to appear in court. If the violator still won’t sign, then they earn a one-way trip to the klink and have to post bond before being released. This rule, however, has one specific exception: “Pregnant women and the elderly. Advise the violator as above. If the violator still refuses to sign the citation, call a supervisor to the scene.” So given that Morales needs a supervisor, I’m dealing with either a pregnant woman or a senior citizen. Isn’t this exciting! 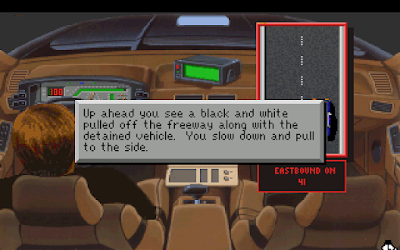 On the scene, I heed both the manual and Sonny’s closing remarks during the morning briefing and approach the violator’s car from the right-hand side. Failing to do so results in a grisly death I’d rather not show here. Getting safely to the stopped vehicle, I ascertain that the driver is indeed a pregnant woman. 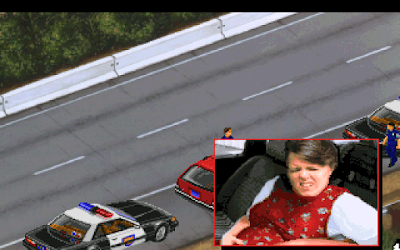 Sonny talks to an angry Morales, who is none too happy to see him. Morales claims that the motorist began running her mouth at her. The motorist says that Morales had been verbally abusive, and that she refuses to sign anything for Morales on principle. Morales, for her part, is hot to take the violator to jail. This puts Sonny on the horns of his second dilemma on what is essentially his first day on the job as a Detective Sergeant. Isn’t being the boss great? 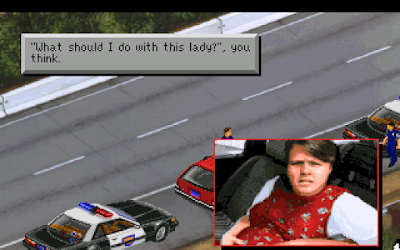 Incarcerate her or cite her for refusing to sign? The game leaves the choice up to the player. The correct course of action is glaringly obvious. 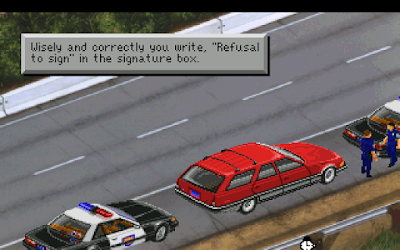 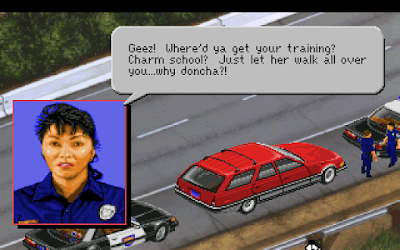 This, like the other decision to be made with Morales, is pretty interesting for an adventure game in that it doesn’t involve getting an item or defeating a foe. I only wonder if such decisions will have plot implications going forward. I’m pretty sure Sonny has made an enemy of Morales by this point.

The situation resolved, I get back in my car intending to go back to the station, but miss my turn and end up rolling down the freeway to the end of Sonny’s jurisdiction, whereupon he promptly turns around—using those handy cops-only lanes cut into the middle of the highway, I’m sure—and cruises down Highway 41 in the other direction. Inadvertently, I am doing what the manual is telling me to do in Section III, Part 8: “Patrol the freeway at 55mph and pay attention to the flow of traffic.” Before I know it, I come across a driver going too slow in the fast lane and causing a line of angry motorists to form behind him. 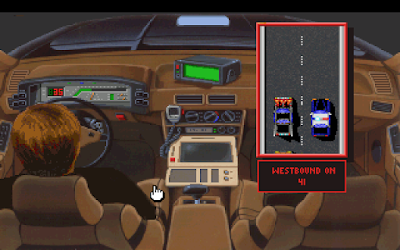 Dang, look at that ride! And yes, if you’re wondering, it is bopping up and down thanks to some muy caliente hydraulics. And check at that paint job! I’ll bet you anything that the driver is a paragon of taste, class, and distinction.

Sonny gets the guy’s license and brings it back to the patrol car to print up a Form 900 citation. I make sure to enter the proper time, based on the clock that appears in the upper-left portion of the screen every time Sonny enters a new area, and cite Mr. Juan Ruiz for “Driving too slow in the fast lane,” vehicle code 21654. Upon receiving the citation and his license back, Mr. Ruiz threatens to contest the ticket. We shall see if he follows through with this or not. 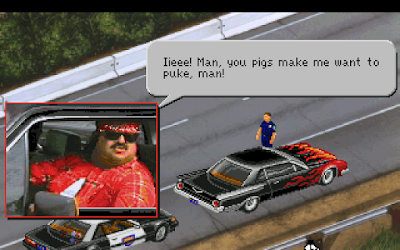 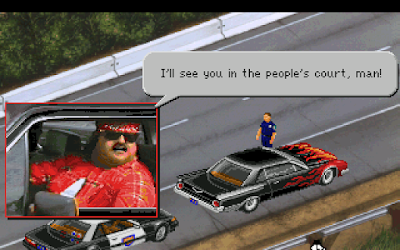 With no other direction from the game, I get back in the patrol car and keep cruising the freeway, although I confess, much like Sammy Hagar, I don’t drive 55. It’s at this time I realize Sonny can turn on the tracking computer. It doesn’t track anybody per se, but it does give a rudimentary map of Lytton with Sonny’s position shown as a blinking light. Very handy, I must say. 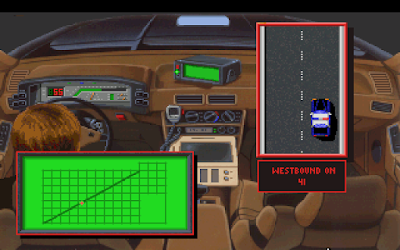 And I think I made the right choice, because Sonny soon encounters another violator, this time a car driving way too fast. 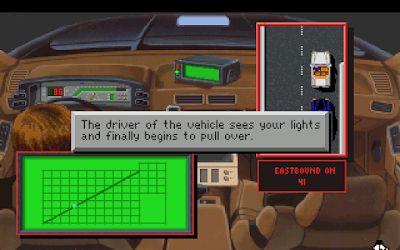 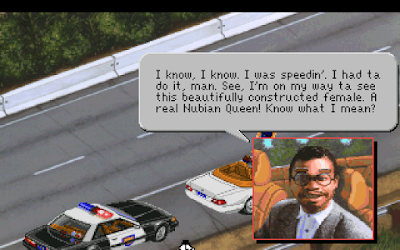 Mr. Hanley tells Sonny that he’s in no condition to drive due to his, er, how shall we put this delicately . . . intense desire for female companionship. While Sonny may sympathize, he still asks for Mr. Hanley’s license and registration.

Here, I make an error. I click “Talk” on Mr. Hanley after getting the license and registration just to see if he has any other humorous things to say. Instead, Sonny returns Mr. Hanley’s stuff and lets him off with a warning. An obviously ecstatic Orpheus Hanley thanks Sonny and goes on his merry way. This doesn’t sit right with me, as Mr. Hanley was driving way too fast. I restore and cite him for violation 22349: “Exceeding the maximum speed limit.” Why? BECAUSE I CAN.

With still no clue from the game to do otherwise, I go on with the patrol! It doesn’t take long for another speeding driver to whiz by.

Is the game really going to throw two speeders at me in a row? That’s a little uninventive, but not out of the realm of possibility for a traffic cop to encounter. But what’s this? This time a large man gets out of the car, and reaches for something in his pocket that Sonny can’t quite see . . . 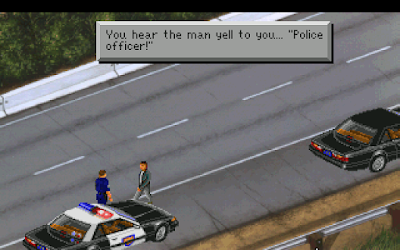 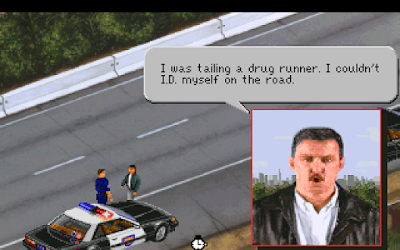 It’s a badge! Argh! The guy is an undercover cop and Sonny just kept him from making a bust! The guy isn’t mad at all; he pretty much commends Sonny for doing his job and then heads back into his car and speeds off. This is a pretty interesting situation, one I’m sure happens more often than we think in larger cities. I just wonder if this character will come back and if this incident will mean anything later on, or if it’s just put in here as one of those things a cop may experience. I suppose there could have been a wrong way to handle this situation . . .

Back on patrol, it doesn’t take too long for Sonny to come upon a driver weaving in and out of traffic quite erratically. I switch on the flashers and pull the offender over. As Sonny approaches the car, he can tell that the guy is pretty wasted, especially since he invites Sonny to drink with him. 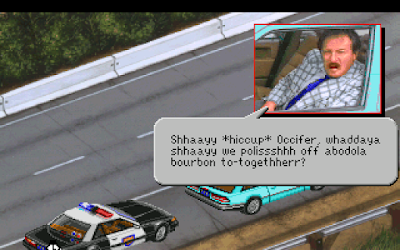 Don’t most drunk drivers, I don’t know, try to deny that they’re drunk when a cop asks them? In any event, Sonny invites this fine upstanding citizen out of the car to perform a field sobriety test. Unfortunately, you don’t get to ask him to recite the alphabet backwards, but you do rather hilariously get to wag Sonny’s finger back and forth while asking the drunk guy to follow it only with his eyes.

Yeah, the guy’s trashed. No choice but to haul him in. Hope he doesn’t get car sick.

Sonny cuffs and searches the guy, Mr. Joseph Hoss, and brings him back to the station as night falls. The routine is the same as when bringing crazy Mr. Forbes into lock-up: Gun in the locker, take the key, escort the prisoner in, enter the booking code, and toss his ass in the slammer. Before the formal booking, though, Sonny has Mr. Hoss use the breathalyzer in order to insure that he is, indeed, drunk as a skunk.

I book him on vehicle code 23152: “Driving under the influence of intoxicants.” Sayonara, Mr. Hoss. Hope you stay off the road for a good, long while.

Just then, a cut scene begins with a typo-laden title card: “Meanwhile, at the OakTree [sic] Mall, Sonny’s wife, Marie [sic] is just getting off work.” 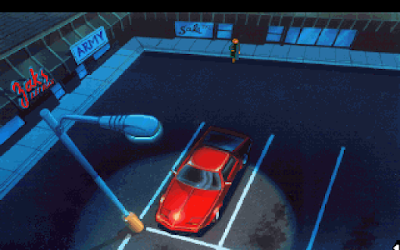 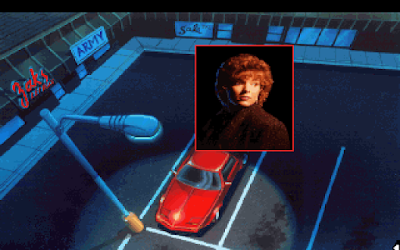 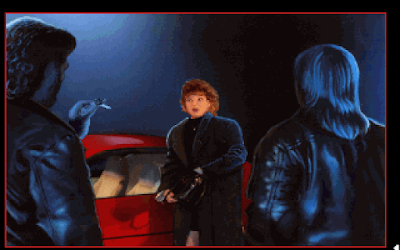 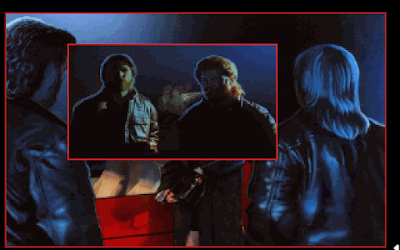 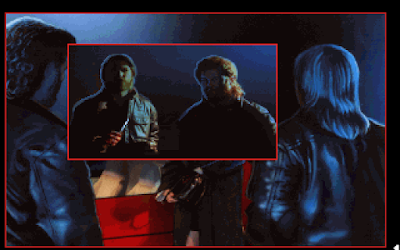 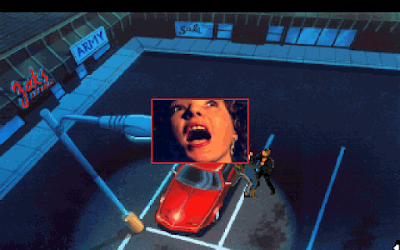 An urgent announcement from dispatch orders Sonny to call. 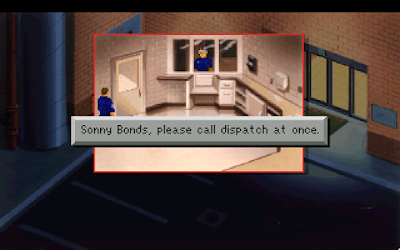 Dutifully, he returns to the office to see what the situation is. 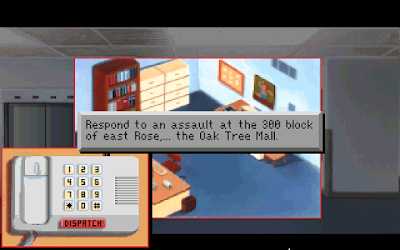 Not knowing who was involved, Sonny gets in his cruiser and sets out for the Oak Tree Mall.