I don't know about anyone else, but I really enjoyed playing Space Quest 1 again. I've played and replayed through many of the Sierra games over the years (previous to this blog, and also replaying them again alongside this blog), and I never tire of the good ones.

My very first experience with Space Quest 1 just involved the Arcada, as I couldn't make it off the ship. I was too young really, and wasn't sure what I should be doing. It was a similar case for the other early Sierra games, but they made enough of an impact for me to continue playing similar games until I was able to finish them on my own.

I've had changing opinions on remakes, and I'd say I'm usually positive about them these days. Problems only arise if the game is altered in such a way that it's not really the same any more, or if the remake is just badly made or buggy. I'm sure we will see all sorts as we progress forward on this blog!

So how does this compare with the original? Lets look at those scores:

The puzzles are largely unchanged from the original game, which means they also left in a really bad one. Generally, I'm okay with puzzles that might give you a walking dead scenario, since the game is quite short and it allows you to save almost anywhere, so I won't mark it down too harshly for that. The problem arises as you enter Ulence Flats, where a strange gentleman tries to buy your skimmer. You have to turn down his first offer, or you cannot finish the game. Other wrong turns can lead to amusing endings/deaths, which is a much preferable way to go about this (such as buying the wrong droid).

A little bonus over the original game is the addition of the magnetic widget, which you pick up in the Star Generator room on the Arcada, and can be used to help you win big at the slot machine. Without this gizmo, the slot machine section requires a bit of save-scumming in order to get enough cash. If you run out of cash though, you can find some coins in the trash behind the bar, so you can retry the slot machine (until it overheats and blows up!). It's also a nice touch for the guy who buys your skimmer to give you coupons for both the droids-b-us and the bar, pointing you in the direction for the things you need to get to the final section of the game.

The original was using the old Sierra text-parser interface, and required you to type commands. While this helped me a lot in my typing abilities as a kid, the graphical interface from this remake is unquestionably better. Each icon represents a different possible action, of which a couple (the nose and mouth) are used to give a bit of comedic flavour to the game. The inventory gives you nice graphical representations of the items you have, alongside a good description (in most cases).

Most of the items you need to interact with or pick up are colourful and obvious, and it is generally clear where you are supposed to go and what you are supposed to do. Even the death screens will sometimes give you a hint about what you did wrong, to help you out for next time and make the experience less frustrating.

The story is a relatively simple one, and for the first game in a series this works very well. You are the lone survivor of a disaster, and although you have little or no experience, you manage to stumble through and save the day in the end. The Sariens are convincing bad guys, they will happily shoot on sight, and you have no doubt that they will use the Star Generator for evil ends. Roger is a good choice for the player character, clueless at the start but a hero through his/your actions (that mostly revolve around self-preservation!).

The story and locations are packed full of references to science fiction: The star generator is a reference to Star Trek II: The Wrath of Khan and the Genesis device for example, with the Sariens taking the role of Klingons (more of a Search for Spock reference there). I'm pretty sure Kerona is supposed to be a stand-in for Tatooine too, but I guess desert planets are common enough in Sci-Fi! (It does have worm-like creatures in the sand, so there's your Dune reference I'd say).

I liked Kerona the most, the red desert and the bones were particularly well drawn and certainly created the right atmosphere. The limited use of music there helped accentuate the harsh and uninviting location, and of course this being a Sierra game it does contain numerous ways to die, so there is a real peril!

For the most part, the game is lovingly re-created in wonderful VGA graphics. As I said for the previous category, Kerona in particular looks great. Other locations can be a bit more varied though, and I thought the Sarien ship interior looked rather messy and incoherent. The character designs varied massively too, best seen in Ulence Flats which has an array of unique looking aliens (not all of which are drawn to quite the same standard). The character animations are good, if sometimes a little cartoonish. The contrast between styles for this and Space Quest IV was most apparent with the little cameo of the time pod, which looked far more detailed than its surroundings.

The music and sound are similarly upgraded, but the music is less memorable than some other games of this era, which is a shame because there are several Sierra games that have great music.

The game opens with an alarm sounding, with Sariens patrolling the ship and leaves you with no doubt that you need to leave as soon as possible. It's actually quite graphic in it's descriptions of the dead crew members, and does make for a great opening. Kerona likewise is a very alien planet with death around every corner, at least until you get to Ulence Flats, which feels like it should have been more of a major section rather than a brief rest-stop before the final scenes.

There are often plenty of light-hearted moments throughout, but you can see that the series has yet to hit its stride. Whereas some of the later games in the series are of a more consistent tone, this one is more of a straight sci-fi adventure with comedy as a background element, rather than a send-up of sci-fi tropes and conventions.

The early game is mainly narration (in the form of large chunks of text), and so dialog takes a back seat. The only conversation you have is a one-sided exposition dump from a scientist just before he croaks. It's not until you reach Ulence Flats that the game allows you to converse with various different characters (although they often have little to say).

The only memorable characters are the two sarcastic robots, one working for Droids-b-Us and the other working in the Sarien armoury. They get a lot of the game's best lines, outside of narration, death text and item descriptions. The death messages are perhaps the highlight in general, and something that most players will see at least a few times. 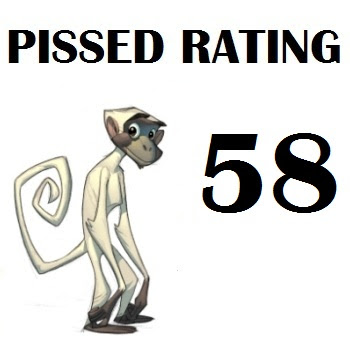 That's 3 points higher than the original, which seems fair since they are basically the same besides the upgraded graphics and sound. Looks like the closest score prize goes to Reiko and Ilmari!

Since there's only three people on the list, I'm going to offer a prize to each one. So if TBD, Fry and Ilmari wold like to choose a science-fiction adventure game from Steam or GOG.com ($10 or less). Congratulations for taking part!

For those wondering what possible other references there were:
Star Generator = Genesis Device (Star Trek II: The Wrath Of Khan)
Aluminum Mallard = Millenium Falcon (Star Wars)
Sequel Police = I've always thought they were a reference to Doctor Who: Daleks - Invasion Earth 2150AD
The zombies = The pointing and screaming is surely a reference to Donald Sutherland in Invasion of the Body Snatchers (1978)
Vohaul's takeover of Xenon = surely a reference to Skynet/The Terminator (also includes time travel!)
Star Trek shuttlecraft = outside the Rocket Bar in SQ1VGA
Green alien woman = A reference to Captain Kirk's love of green-skinned ladies, and also a reference to Total Recall (when looking at her it says, "You must be getting dizzy - you're seeing triple")

I'm sure there are many others that I've missed!

10 points for Aperama
10 points to Fry
A late update of the the current rankings for the 1991 games:

It seems remakes are getting higher numbers than many of us suspected. Furthermore, the order of Larry and Space Quest Remakes has confounded many. But Charles' guess of top 5 appears to be quite promising!
Posted by Ilmari Jauhiainen at 23:00