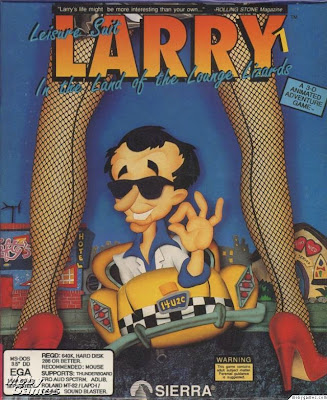 Hello everyone! This is Alex, a long-time lurker, sometime commenter, and now full-fledged reviewer at the Adventure Gamer. I am very excited to be helping in keeping this great blog running, as Trickster has provided me with hours of entertaining, and informative, reading. I have volunteered to take on a handful of Sierra games, being that Sierra games are mostly what I played growing up. And since nostalgia is such a powerful thing, I’m looking forward to sharing my trip down memory (or was that “mammary”?) lane with all of you, starting with Sierra’s 1991 remake of Leisure Suit Larry 1.

Trickster covered the original Larry way back in 2012, so I don’t need to rehash a lot of the information covered in his original introductory post. I just want to add two personal things: I have been a fan of the Larry series for longer than I care to admit, and Al Lowe is a favorite game designer of mine.


As many readers know, Sierra got it in their head sometime in the early 1990s to remake their classic adventure games with updated graphics, sound, and interfaces. The first of these was the King’s Quest 1, but Space Quest 1, Police Quest 1, Leisure Suit Larry 1, and Quest for Glory 1 soon followed suit. Sierra put the kibosh on rereleasing the rest of these series, however, leaving the remakes as something of an oddball in the Sierra library.

As something of an oddball myself, I figured it would be fun to take a look at the Larry 1 remake, so here we go!


As with the original Larry 1, there is an age-verification mechanism at the beginning to ensure that no minors get corrupted by the mature and highly intellectual content contained within the game. First, you choose your age.


Alright! With the hard part out of the way, let’s get to getting Larry some action!


Note Regarding Spoilers and Companion Assist Points: There's a set of rules regarding spoilers and companion assist points. Please read it here before making any comments that could be considered a spoiler in any way. The short of it is that no CAPs will be given for hints or spoilers given in advance of me requiring one. As this is an introduction post, it's an opportunity for readers to bet 10 CAPs (only if they already have them) that I won't be able to solve a puzzle without putting in an official Request for Assistance: remember to use ROT13 for betting. If you get it right, you will be rewarded with 30 CAPs in return. It's also your chance to predict what the final rating will be for the game. Voters can predict whatever score they want, regardless of whether someone else has already chosen it. All correct (or nearest) votes will go into a draw.
Posted by Ilmari Jauhiainen at 23:00