And Larry is back! After our pop quiz, Larry is ready to get to it. The conceit of this game is simple: Larry is a 38 year old bachelor who lives with his mother and is terrified of the opposite sex. One day, he decided he’d had enough with his pathetic existence, put on a leisure suit, and made his way to the city of Lost Wages to get laid. Did I mention that Larry is a virgin?

So yeah, it’s a stupid plot. It’s also based on an old text adventure game called Softporn Adventure, which I believe someone will get to on this site in the near future (Admin's note: Done!). Anyway, let’s help Larry get some!


One last note: Instead of comparing this remake with the original on a screen-by-screen basis, I’ll just point out any interesting differences or changes. Here’s one: Instead of just the usual eye/hand/walk cursors common to Sierra’s point-and-click games, the Larry 1 remake adds a zipper and a nose for further interaction. They provide humorous messages and not much else. I’ll be sure to include the good ones.

On with the show. First, let’s take stock of Larry’s inventory.

We’ve got a wallet with $94.00 and a bunch of unusable credit cards, a bottle of breath spray, and a watch. The time is currently 10:00 p.m. Is this game timed? We’ll soon find out!

Going either to the left or right of Lefty’s takes Larry to the same place: an alley where a surly looking thug stalks towards Larry with malice in his eyes.

So all of that brings us back to the front of Lefty’s bar. I have to say, I enjoy this particular death in the original Larry 1, where you see other Sierra characters like Graham and the dragon from the original King’s Quest, and Roger Wilco’s droid from Space Quest 1. 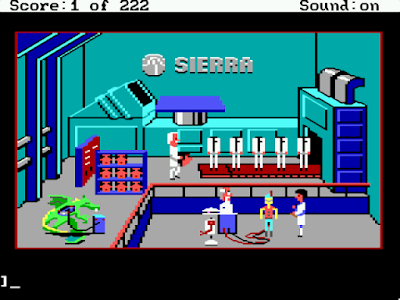 In any event, let’s see what happens when we walk up from Lefty’s, instead of left or right. 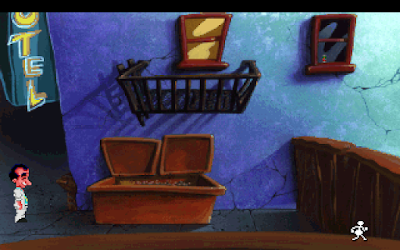 It’s another alley, complete with a dumpster and a wall I can’t climb over. The two windows above are each interesting: The one on the left emits a glow, while the one on the right is dark with something on the windowsill that Larry can’t make out from down here. The fire escape is out of reach, meaning that, if I want to see who, or what, is in the left window, I’ll likely have to do it from inside of Lefty’s.

Clicking the eye cursor on the dumpster gives the message, “Unfortunately, you can’t see much from out here.” Is that a hint that Larry needs to go inside the dumpster?

Larry, looking way too happy to be sitting in a dumpster and getting his leisure suit all grimy, fishes through the trash and finds Lefty’s hammer (3 points). With nothing else to do in the dumpster, Larry decides to check out Lefty’s posh exterior.

The sign on the post out front reads “Taxi stand,” but I don’t think Larry wants to hail a cab just yet. Maybe he’ll have better luck with the ladies in the bar instead of outside of it. 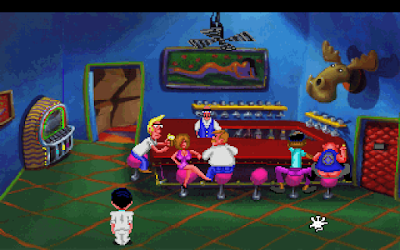 Lefty’s is sleazy, tacky, and smells funny. Reminds me of a bunch of places in Boston. There is a bar with four dudes and one lady; this sausage party isn’t going to help Larry in his mission. Lefty tends bar, and there is a hallway in the back and a closed door on the right. There is a jukebox against the left wall, and a moose’s head on the right. Looking at the moose tells me that it’s an antique left over from King’s Quest III. Pop quiz: what other Sierra games covered on this blog also have moose heads? 5 CAPs for the first correct guess!

Well, let’s check out the jukebox. 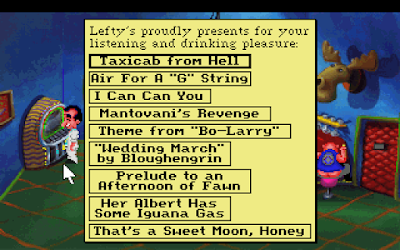 This is kind of cool! Putting a dollar in lets you choose one of several music tracks from the game, as opposed to the original Larry 1, which merely plays the Larry theme. I think I’ll play “Taxicab from Hell,” since that sounds similar to a Frank Zappa album title.

Checking out the patrons reveals that the fat and skinny guys on the right and the dude in the white shirt on the left pounding a beer have no interest in speaking with Larry. Neither does the woman, who we’re informed isn’t exactly a looker but probably has great leg muscles. She tells Larry to piss off or else her boyfriend will beat him up when he gets back from the rest room (SPOILER ALERT: She’s lying). The fat mustachioed guy next to the woman has nothing to say, so Larry might as well sit at the bar.

Upon sitting, mustache-man turns to Larry and starts blabbing. Clicking the talk icon lets Larry tell him off, giving him a rare psychological victory but not much else. 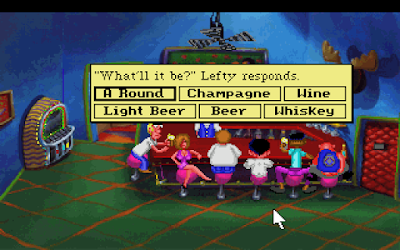 Talking to Lefty gives the options to buy a round, champagne, wine, light beer, beer, or whiskey. I buy a round, which Lefty informs Larry costs $90.00. I do so, which the game informs Larry is another unsuccessful attempt to buy friendship. Being left with only $3.00 seems like a pretty dumb thing to do, so I restore and order wine instead. The following exchange ensues:

Larry: “May I please have a glass of your delicate white zinfandel, sir?”

Narrator: Hey, was that your voice?

Narrator: You flip five bucks onto the counter. You delicately sip the wine until it’s all gone.

Larry: “I find this impudent and sassy, with the slightest hint of impertinence.”

Narrator: He gazes at you longingly and moistens his lips!

Say! Maybe love isn’t so hard to find in Lost Wages after all!

You can get drunk and spend all your dough, but when ordering a whiskey, Larry decides to carry it with him for some reason (1 point). Let’s check out that red door!

Knocking on it causes some creep to slide open the peephole and ask for a password. Not knowing any password, Larry is quickly told to take a hike. Let’s come back here later. Right now, I want to see what’s down that hallway. 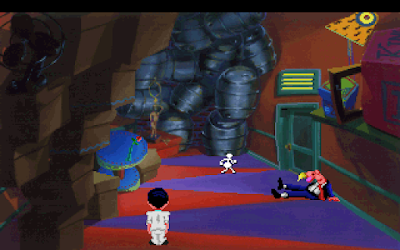 There’s a drunk, a door, and a whole bunch of clutter blocking the rest of the hallway. Again, sounds like a lot of bars in Boston!

This sounds like a pretty good place to wrap things up. I anticipate the next few posts will go a bit quicker.

Note Regarding Spoilers and Companion Assist Points: There’s a set of rules regarding spoilers and companion assist points. Please read it here before making any comments that could be considered a spoiler in any way. The short of it is that no points will be given for hints or spoilers given in advance of me requiring one. Please...try not to spoil any part of the game for me...unless I really obviously need the help...or I specifically request assistance. In this instance, I've not made any requests for assistance. Thanks!
Posted by Ilmari Jauhiainen at 23:43