Having to do that dumb quiz every time you load up this game gets to be kind of annoying. There’s got to be a way to skip it.


Anyway, back to Lost Wages, where we left Larry standing in a hallway in Lefty’s bar near a drunk and a door.

The guy asks for a drink. I try to give him a dollar, which he takes, but says he “could really usshh . . . a good, sshhtiff belt!” Well, it’s a good think I happen to be carrying this shot glass of whiskey! Larry gives the drunk the drink, he drinks it, and gives Larry his only worldly possession, a television remote (2 points). Although Larry finds no use for it, the image of him pointing it at his junk and hitting the buttons is pretty funny.


Moving along, Larry heads into the door on the right, which leads, appropriately enough, to the head.

Clicking the zipper icon lets Larry take a leak for no points, and the hand icon lets him pinch a loaf for 1 point.


But don’t flush that toilet! It overflows, and instead of opening the door and leaving, Larry stands there like a dolt and lets himself drown in toilet water.


A quick restore later, and Larry is less-inclined to practice personal hygiene, but still, there’s a sink in the room, so he may as well wash his hands. What’s the worst that can happen?


And what’s this? There’s a diamond ring in the sink that some dummy left behind, so into Larry’s pocket it goes (3 points).

Some of that graffiti looks interesting, and I swear I see a blurry version of the F-word. Repeatedly clicking the “eye” icon on the wall shows some of the “wittier” entries, including such gems like:

Password, eh? I think I know where to use this!

In this version, as opposed to the original Larry 1 where you have to type the password out to use it, Larry writes it down himself, and it appears in your inventory as the words “KEN SENT ME” (Ken Williams, perhaps?)

Continuing on with my practice of pointing out the differences between the versions, in the original, you also start out with some useless pocket lint in your inventory; that is absent in this remake.

Leaving the foul-smelling bathroom with dirty hands but an empty colon and a diamond ring, Larry realizeshe did not notice the rose on the table in the hallway. I make it mine (1 point) and continue back to the Naugahyde door in the main barroom. Larry knocks, whispers the password, and gains entrance into the back room, where a pimp demands $200.00 to see who—or what—awaits up the stairs.


Upstairs in the hooker’s bedroom is a table with a box of candy, which Larry snags (2 points), a hooker, and a distinctive aroma. 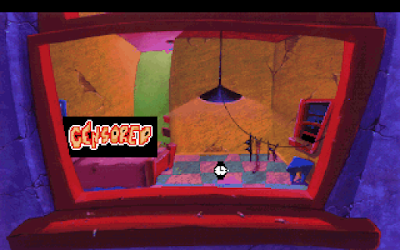 Now that Larry’s pipes are cleaned (11 points), nothing left to do but defenestrate himself! 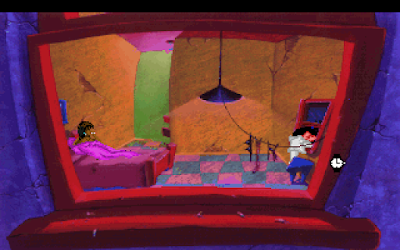 Uh, let’s restore, skip the hooker, and go straight to the defenestration. Larry will come back when he’s more, um, prepared.

I have to say, there’s lots of stuff to do at Lefty’s. This is one thing I appreciate about this game: each location tends to have many things to do in it.

Back out front, clicking the talk icon on the taxi sign makes Larry shout “YO! TAXI!” (as opposed to typing “Taxi” in the original), and before he knows it, Larry is riding in style!


Talking to the cabbie gives a list of places he can take me, complete with a clickable menu: A casino with an all-night wedding chapel next door, and a disco next to a convenience store. Disco? Sounds like a good place to meet chicks! I tell the cabbie to take me there. The guy charges me $16.00, which I pay and get out (1 point). 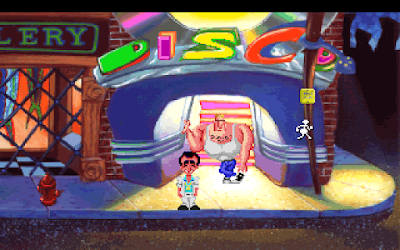 Outside of the disco, the bouncer will not let me in without a pass. Using the zipper icon on him makes Larry ask to use the restroom as a ploy to get in. The bouncer doesn’t fall for it. Even trying to bribe the guy doesn’t work! Dejected, Larry walks one screen to the left and finds the convenience store that the cabbie told him about. 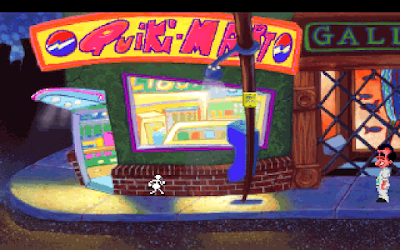 There’s the entrance to the convenience store, but I’d rather check out the pay-phone (remember those?). Clicking the “eye” icon on it makes Larry thumb through the phone book. The only legible number scribbled on the side is “555-6969”; Larry gets 1 point for discovering this information. Might as well dial this clever number (2 points).


Oh boy. The lady on the other end of this survey asks me a bunch of questions. Here goes nothing!


And right as Larry’s about to get told what his prize is, the number cuts out. Oh well. May as well go into the store now.


The store comes complete with a non-P.C. foreign store clerk with a sign informing me I have to ask him for “lubbers.” Might as well poke around first. Larry picks up an issue of JUGS magazine (1 point) and a gallon box of wine, for only $1.00! (1 point).

Gotta pay for this stuff, but might as well buy a condom on my way out. I think I know just where to use it . . .

Larry’s head does a 360-degree swivel before he asks the clerk for a “lubber.” There are several prophylactic-related options: Larry can choose between lambskin or latex; smooth or ribbed; colored or plain; lubricated or rough-cut; striped or plaid; peppermint or spearmint; light or heavy weight; normal or industrial thickness; plain or spermicide; large, giant, or gonzo size; before the clerk blares his choices out to the seemingly empty store (4 points). 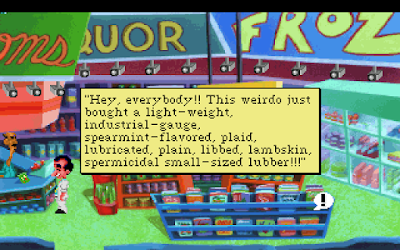 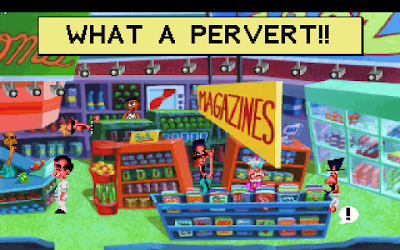 Larry pays, giving the guy a “Thanks a lot, Saddam!” before leaving. This sequence gives Al Lowe a chance to demonstrate his patented level of highbrow, New Yorker-quality humor. On a slightly less humiliating note, Larry reads his copy of JUGS and finds an article about window washers securing themselves with a rope around the waist before working on the sides of tall buildings (1 point). A clue for the mysterious other window at Lefty’s, perhaps? If only I had some rope . . . In any event, Larry soon skips to the centerfold. Stay classy, Larry.

Larry leaves, and the phone is ringing! There’s also a drunk guy wandering around outside of the store. He asks me for change, and then for a drink. Well, I do have this box of wine, and if there’s one thing Leisure Suit Larry has taught me is that you give alcoholics what they want (5 points). The drunk informs me that he doesn’t have a remote control, but he does have a pocketknife, which he gives to Larry, warning that it just may come in handy given the prevalence of dangerous women preying on studs like him and Larry. Okay . . . 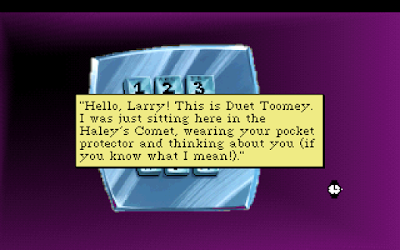 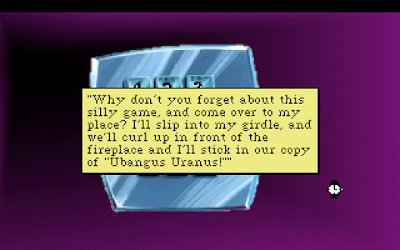 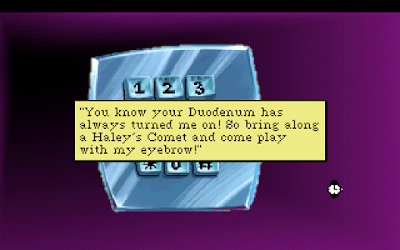 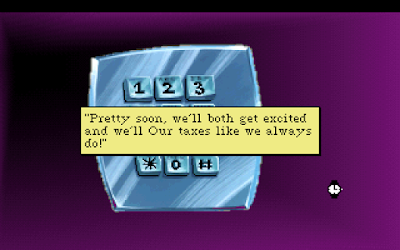 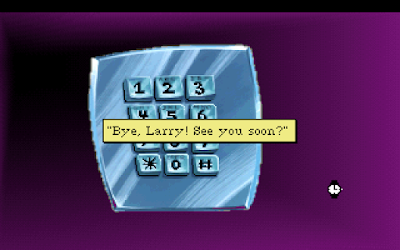 With that out of the way, Larry eagerly pays another $12.00 for a taxi ride back to the hooker at Lefty’s! This time, Larry’s ready for the hooker. Quest-wise, we’ve come a long way from “Find the three magical treasures” and "Stop the Death Angel’s reign of terror,” that’s for sure.


Well, I think Larry’s done all he can do at Lefty’s for now. Let’s come back when we have some rope. In the meantime, let’s . . . 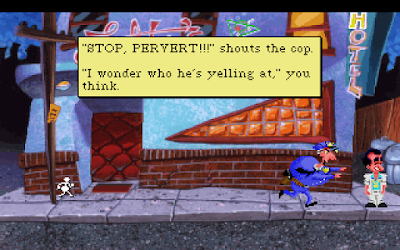 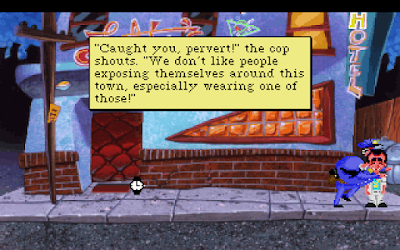 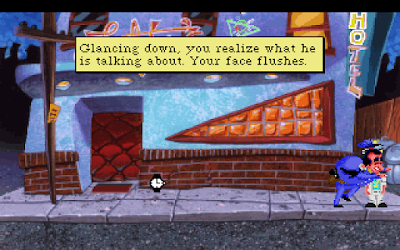 I like how in the original Larry it’s Police Quest’s Sonny Bonds who makes the arrest.

It’s a good thing that clicking the “hand” icon on Larry removes and disposes of the used prophylactic in a way that the game refuses to describe (1 point). Larry can now move about free of interference from John Law. Looking at his rapidly diminishing money reserves, Larry decides a jaunt to the casino might be in order. $16.00 later, and . . .


And this seems like a good place to stop for now. Larry needs cash, and this might be the place to get some.