Game 34: The Colonel's Bequest - The Calm Before the Storm

Laura Bow Journal Entry 6: "Could an hour have gone past without anyone being harmed? Somehow I doubt it! I fear my father wouldn't be very proud of me right now. I just don't seem to be able to put all the pieces of this puzzle together and form any sort of picture. Everyone seems a legitimate suspect, with items found at each death scene pointing to a different guest. Everyone seems to have a motive too, meaning I'm aimlessly wandering around witnessing an entirely family being massacred, powerless to stop it. Come on Laura! Think!!!" 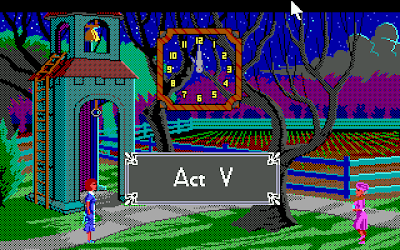 It appears things will move much more quickly now (from both playing and blogging points of view). The main reason for this is that there really aren’t all that many guests left to keep track of, but it also helps that I now know the environment pretty well and have asked everyone just about everything I can think of. Act V started a bit differently to the last few, as I had no real evidence to suggest anyone had been murdered. The fact that the progress clock had appeared when I’d found Ethel stumbling around drunk had made it clear to me that she was more than likely the next victim though, so I set out to find her body. It seemed logical to follow the route that she’d been taking in her oblivious state of mind, so that’s exactly what I did. Once I reached the fence at the southern end of the island, I found an item on the ground that hadn’t been there prior. A closer look revealed that it was a rolling pin, which I picked up. “As you pick up the rolling pin you notice a muddy footprint nearby.” Oh great, another footprint! Just as with the last footprint (that I’d found in the billiards room where Gloria was killed), I couldn’t find anything to do with it, but I had a strong sense that I was supposed to. 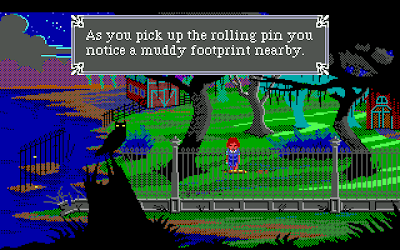 "You look at it but decide not to describe it to the player at all. Best to leave him in the dark!"

It seemed to me that the rolling pin was the likely murder weapon, most likely used to make Celie look like the perpetrator. I moved on, dropping in to check out the carriage house on my way. Ethel’s body was there, dropped into the boat with MINNOW written on it! “This is dreadful!! Poor Ethel has been hit over the head and killed!” I searched the body, but this time came up empty handed. There appeared nothing else to do there, so I made my way back to the house to see where the remaining guests were situated. I’d made a habit of starting upstairs, and was surprised when the progress clock appeared in the very first room I entered. Henri and Lillian were having a conversation, but my entering the room had interrupted them. I knew exactly what to do obviously, and made my way into the hidden room that looks upon Henri’s bedroom to spy upon them. Lillian: “Why are you treating me this way, Uncle Henri? Don’t you care how I feel? Don’t I matter to you anymore?” Henri: “You matter to me the same way everyone else does. No more... and no less.” Lillian: “But I don’t understand it! I thought I was special! I thought you cared for me more than for Gloria, or Rudy... or any of the others!” Henri: “You’re right; YOU thought that. You were wrong.” 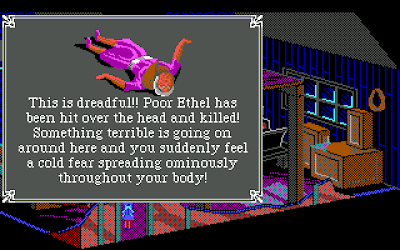 The fourth murder finally made Laura realise that something terrible was going on! 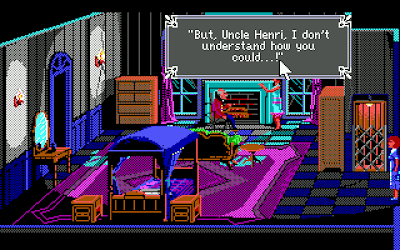 ...fit into that elevator in your wheelchair! Isn't it too big?"

The two of them continued on in this fashion for a short while, before Lillian stormed out declaring:  “Somebody’s behind this, I just know it! And I intend to find out who it is!!” I questioned Henri, but had the same amount of success I’d had since the game started. None! I checked out the other rooms upstairs, but the only thing of note was the “faint aroma of perfume” I could apparently smell in the other hidden room. Clearly someone other than Henri had been spying on people from there, and since Lillian, Fifi and Celie were the only women left, I figured it most likely to be one of the first two. I climbed the stairs to Fifi’s room on the top level of the house. I was then witness to a rather provocative scene, with Fifi stripping down to nothing and then putting on a white dress. She then sat at her vanity and began doing her makeup. Was she preparing to meet Jeeves? When I’d finished coercing with the maid, I made my way down to the ground floor, deciding to go and see what Polly the parrot had to say for this act. Walking into the parlor brought the progress clock up yet again, and I noticed Clarence sitting by himself having a drink. 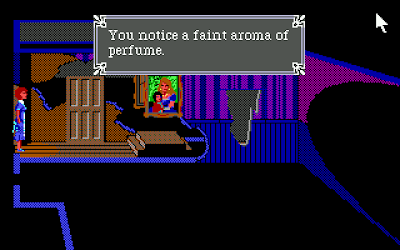 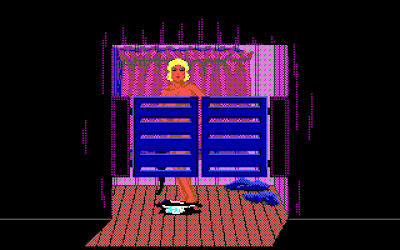 Watching a French woman undress made me think I was playing Emmanuelle for a second! 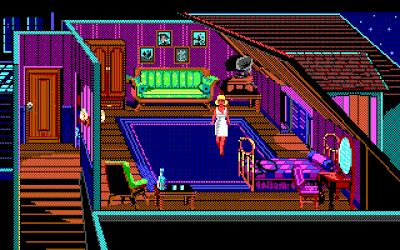 Fifi is definitely getting ready for some action!


I watched, but nothing of note happened. Did this mean that Clarence was going to be the next to die? Even though I thought the game was setting him up as the obvious yet incorrect suspect, I didn’t think it likely that he would be taken out at this stage. I set about asking him lots of questions, hoping that the reason for the trigger might make itself known, but found out little of interest. I therefore turned my attention to Polly, giving her another cracker in return for a repeated comment. “Jeeves! Kiss me again! AWWKK!” Once again this was something I already knew about, as I’d seen Fifi and Jeeves kissing at the end of Act IV. I left the parlor and entered the dining room, stunned to find the progress clock on the screen yet again, ticking over to 11:45! This was all happening too fast, and I wasn’t filling in very many cells on my guest location spreadsheet. Rudy was sitting at the table having a late night meal, with no-one else in sight. As with Clarence, I questioned him about just about everything, and it probably goes without saying that I learnt nothing of note. Now I was confused, as that made two trigger points where nothing was actually happening! They couldn’t both get murdered at the end of the act...could they??!! 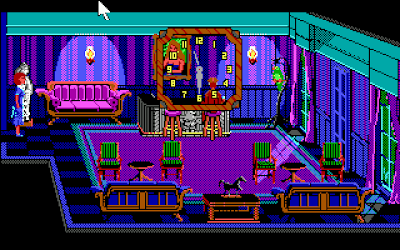 Oh please let Clarence be next! 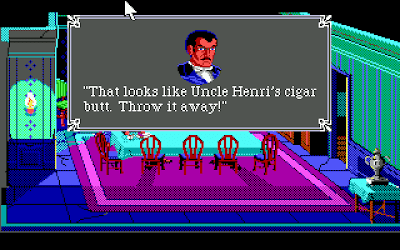 Rudy did at least confirm that the cigar butt looked like one of Henri's.

I continued my rounds in the house, hoping to mark down where anyone else was at 11:45. Clarence and Rudy were both still in the dining room and parlor respectively, so I went back upstairs to see whether Henri and Fifi were still in their rooms. On entering Henri’s room, I found him gone, and yet the progress clock appeared and moved on to midnight, with the words Act VI below it! I’d managed to find all four trigger points in around twenty minutes! I was at a loss to explain what had happened at each of the triggers too, apart from the first one where Lillian and Henri’s conversation was clearly the focus. Normally I was fairly certain who the next victim was, but Act V seemed to suggest that any of Henri, Rudy or Clarence could be about to lose their life. I looked carefully at Henri’s room to see whether there was evidence of foul play, but all I was told was that “the Colonel’s wheelchair sits empty in the middle of the room.” I decided the best course of action was to restore back to 11:00, and then avoid the trigger points as much as possible while I set out to find where the other guests were at each point in time. 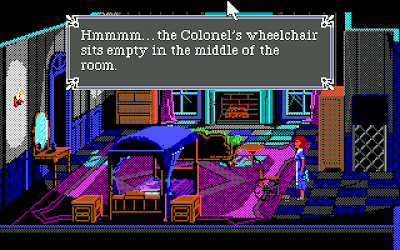 I'm beginning to think that the Colonel can walk unassisted. Could he be killing his own family members?

This proved pretty uneventful. I found Jeeves in the cellar getting dressed and having a shave. It looked even more likely that Jeeves and Fifi were soon going to be meeting up for a romantic interlude, especially when I noticed the bouquet of flowers on his bed. Jeeves had been unwilling to give me any information during any of the acts, and this one proved no different. “I’m tired. I don’t want to converse.” With Jeeves ticked off the list, I made a beeline for Celie’s shack, noting that she was no longer knitting on the porch. I knocked on her door to find that she was still home, and still didn’t have any time for me. I then paid a visit to all of the outside locations, just in case I found anything at any of them that might give me something new to interact with or think about (I did see the ghost in the cemetery again though). In the end I had to accept that either nothing much occurred during Act V, or that I’d missed something that I simply wasn’t going to find now. It was time to find out who was still in the running for Henry’s fortune! Act VI here I come! 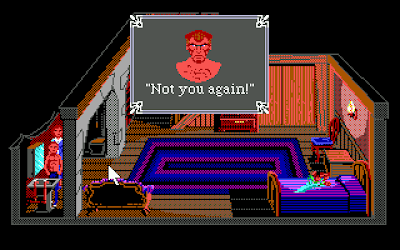 It's not surprising Fifi loves Jeeves, what with his natural charm and all! 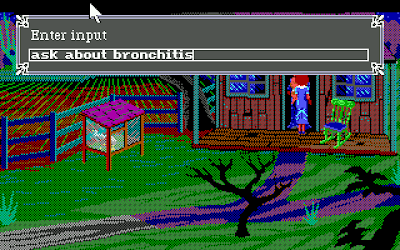 Well it's just good manners to ask how her health is these days!

This is what I make of Act V 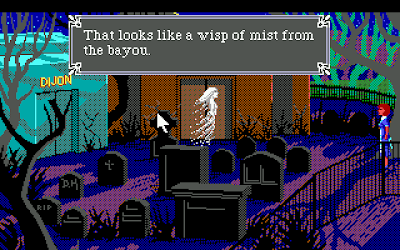 If this spirit plays no role in the game, I have to say that it's very strange to include it!

Note Regarding Spoilers and Companion Assist Points: I've written a set of rules regarding spoilers and companion assist points. Please read it here before making any comments that could be considered a spoiler in any way. The short of it is that no points will be given for hints or spoilers given in advance of me requiring one. Please...try not to spoil any part of the game for me...unless I really obviously need the help...or I specifically request assistance. In this instance, I've not made any requests for assistance. Thanks!
Posted by The Trickster at 21:50

Email ThisBlogThis!Share to TwitterShare to FacebookShare to Pinterest
Labels: 1989, The Colonel's Bequest, The Trickster