[This blog page has been retained here due to historical reasons, but up-to-date rules of The Adventure Gamer can be found on a separate page].

As I was progressing nicely through the first game on the list, the fact that I don't yet have a scoring system was bugging me. I promised the CRPG Addict that I wouldn't steal his patented GIMLET, nor would it be very useful when rating adventure games, so I've had to knuckle down and come up with my own.

After writing down a number of categories that I feel are important to discuss when reviewing adventure games, I decided to use an online anagram maker to see if any words would miraculously appear. I'm sure you can imagine my delight when the word PISSED appeared on my screen, and from that moment on I wasn't willing to change a thing. 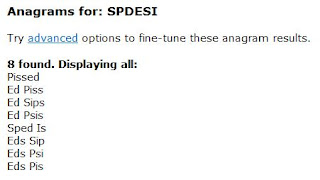 I considered the ED PISS Rating System, but decided on PISSED at the last minute

The PISSED rating system is fully described below:

Puzzles and Solvability
By definition, games in the adventure genre include some level of puzzle solving. Whether it’s finding clues to solve a mystery, collecting parts required to produce a needed item, or literally trying to solve a virtual puzzle, adventure games give players the chance to use their observation and deduction skills to pass challenges. This rating not only judges the creativity and enjoyment of puzzles in a game, it also takes into account whether or not the puzzles have logical solutions that don't involve combining seemingly irrelevant items in irrational ways.

Interface and Inventory
Interfaces of adventure games have gone through quite a few phases over the years. Initially relying on parser technology (text analysis), the genre really took off during the late eighties with the introduction of point and click interfaces such as LucasArts’ SCUMM. This rating will look at how intuitive a game’s interface is and how managing inventory is handled.

Story and Setting
Given that adventure games are almost entirely story driven, and that combat and action is purposely minimised to allow that story to unfold depending on the player’s actions, I don’t think there’s any doubt that this letter is the most important part of the PISSED rating system. I will rate not only the story as a whole, but how it is implemented into the game setting.

Sound and Graphics
As anyone that enjoys old computer games would know, graphics and sound are not of ultimate importance when it comes to a satisfying experience. Still, there’s no doubt that the visual and audio quality and creativity can help immerse the player in the game world. I’ll be rating the graphics, animation, sound effects and music for each game.

Environment and Atmosphere
I guess this is partly covered in some of the other PISSED categories, but I wanted a specific place where I could attribute a rating to the overall “feel” of a game. I’ve definitely played games where the interface and story are less than great, but the atmosphere sucks me in to the point where I push on (I remember playing B.A.T. as a kid and struggling on to see what happens even though the interface sucked). On the flipside, some games tick all the other boxes but somehow fall flat when it comes to atmosphere. I’ll try and put a numeric value to this extremely subjective quality.

Dialogue and Acting
While voice acting plays a role in most modern adventure games, there was once a time where acting as a whole was a major feature. If you’ve played FMV titles such as The Pandora Directive or The 7th Guest, you’ll know what I mean. Obviously this is not a feature for old games to be judged on, but dialogue certainly plays a part in every adventure game in one way or another.

I plan to rate each of the above six categories out of 10 before calculating a score out of 100 from there. Let's see how it goes and if it's not working for whatever reason, I'm sure I can adjust it while still forming an inappropriate word in the process.﻿
Posted by The Trickster at 15:41