What's This Blog All About?!

[This blog page has been retained here due to historical reasons, but up-to-date story of The Adventure Gamer can be found on a separate page].

I don't have time for this either!

That might seem like a strange way to kick off a brand new blog, and I guess it would be for anyone that hasn't already paid a visit to The CRPG Addict blog. You see once upon a time I came up with what I thought was an awesome idea. This was an idea so crazy and so geeky that surely I could be the only person on the face of the planet that would consider following through on it. I'd decided I was going to play every role playing game ever released for the PC in chronological order. Not only was I willing to give up a fair portion of my life to this endeavour, I also intended to blog about the experience and see if anyone else out there in cyberspace wanted to go along for the ride.

This idea bounced around in my brain for a couple of months while I put together lists of role playing games and figured out whether enough of the old ones were available to play (using the likes of DOSBOX) for this idea to come to fruition. It was during this research period that I came across The CRPG Addict's blog by mere chance and my idea was crushed quicker than you could say Planescape Torment. Not only was there another thirty-something year old professional out there blogging his way through a seemingly endless list of computer games, he was actually a really good writer with a knowledge and love for the genre surpassing my own! The CRPG Addict Blog: Stole my idea before I even had it while setting a high bar for any attempt of my own.

I had a couple of options available to me at this point. I could let the idea go and play whatever game I wanted to whenever I wanted to. Alternatively, I could switch my attention to my other beloved computer game genre...the adventure game. This would not only give the completist in me the stupendous project it was looking for, it would also act as a fine companion to the wonderful work the CRPG Addict is producing simultaneously. Being a hard working professional with a family, there's no doubt keeping this blog consistently updated will be a challenge, but I'm going in with every intention of at least finishing the first list I've set my sights on (see the rules below for more details).

So what's my background in adventure games? It's probably identical to most other gamers that began their journey in the eighties! My childhood was filled with Sierra's Quest series', with King's Quest and Quest For Glory getting the most game time. My teen years were taken up mostly by the incredible run of excellent games Lucasarts produced such as the Monkey Island series, Full Throttle and Sam & Max. This was undoubtedly the golden age of adventure gaming and by the time the year 2000 came around, the point and click genre had pretty much died away, with only a handful of games coming out every couple of years. I took this forced hiatus to focus on role playing games by Black Isle and Bethesda, and the multitudes of first person shooters that came out at a rapid pace during this period. 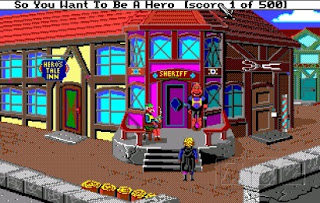 Quest for Glory I: Holds a very special and nostalgic place in my heart.

What brought me back to the adventure game? A little girl called Sophie! When my daughter was born, the second bedroom that contained my $5000 Alienware beast immediately took on the position of nursery. Having only a small unit, the limited time I had to game was forced out onto a laptop in the loungeroom. As good as the laptop is (it's Alienware also), I just couldn't bring myself to play through the likes of Dragon Age and Mass Effect 2 on such a small screen in resolutions less than a million times a million. I decided the time was right to play some older, less hardware intensive games that I missed the first time round, and thus began filling my virtual shelf at gog.com. First up was The Longest Journey, quickly followed by Syberia I and II, and all of a sudden I was once again hooked on adventure games. I've since longed to play through all the early Sierra games that gog.com has now made available for modern operating systems, but I'm just as excited by the idea of following the entire evolution of the genre from its humble beginnings through to the modern renaissance.

The CRPG Addict is already 60 something games through his list and since he's gathered a reasonably large fanbase in the process, it just makes sense that I use a similar set of rules to the ones he put in place for his endeavour. I'm sure I will get some criticism for copying his framework and style, but my ambition is to make this blog a companion piece to his, where readers that enjoy The CRPG Addict might also find value in The Adventure Gamer, without having to figure out an entirely different structure. That being said, not all the rules that apply to role playing games make sense when applied to adventure games, and I've decided to place some undoubtedly controversial restrictions on which games I will play.

1. Only Graphic Adventure Games. After much thought, I've decided to only include adventure games with a graphical interface. That means no interactive fiction will appear in this blog. This choice was made for a few reasons, but the main one comes down to entertainment. I've played through Zork I and enjoyed it enough to consider playing the rest, but I'm not sure that this blog would be very interesting if I spend the first year struggling through endless Infocom titles with screenshots of text. I also admit that I'm keen to get into all the Sierra games I didn't play as a kid, so that seems like a good place for me to start if this blog is going to go all the way.

2. Only games that have been released on the PC. I've played games exclusively on PC for the past fifteen years and that's unlikely to change any time soon. Just as with The CRPG Addict, I can't be bothered playing around with numerous emulators and feel the list of games is well and truly long enough as it is.

3. Wikipedia's list of notable graphic adventure games is my Bible. Yes, this does indeed mean that the list I'll be following excludes more adventure games than it includes. That's cheating I hear you cry! Well, Moby Games currently lists 991 adventure games that were built for DOS and 2364 for Windows. There's a chance many of those were created for both and are therefore duplicates, but that still leaves an unquestionably impossible list of games to get through. I'd never make it out of the eighties! Wikipedia's list of graphic adventure games can be found here and at last count there are 278 games on that list. I have no idea how many have been released on the PC, nor do I have any idea what criteria need to be met for a game to be considered "notable".

4. No walkthroughs! I'm likely going to regret writing that, particularly as walkthroughs are all over the internet for pretty much every adventure game in existence. But there's no doubt that solving puzzles and figuring out what to do next when stuck in adventure games is a large part of the enjoyment. If I get REALLY stuck on a game, I hope to be able to get hints from readers, rather than ruining the experience for myself by "cheating".

5. I don't have to win every game, but I must at least make a sincere effort to play it. I will also follow The CRPG Addict's lead here and commit to playing each game for a minimum of six hours. I would like to think that I will quit far less games than he would for the simple reason that RPG's generally take a lot longer to complete than adventure games. All this being said, I retain the right to skip a game on the list if I a) can't find a functional copy anywhere or b) don't think it meets the definition of what is an adventure game.

Enough talking, let's do this!

Note Regarding Point 3: Since beginning to make my way through the list of games, there have been some changes to the way games are selected. Please visit the Companion Assist Points Explained post for more information.
Posted by The Trickster at 21:33