Game 1: Below the Root - Introduction 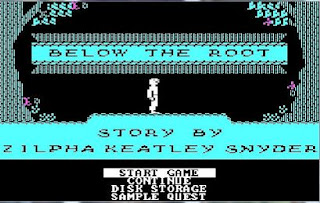 Anticlimactically, the first game on Wikipedia's List of Graphic Adventure Games does not appear to have ever been released for DOS or Windows, which means I'm skipping The Portopia Serial Murder Case. Having checked out the game on YouTube, I'm a little sad not to be playing it. It looks like an interesting investigative adventure with innovative features such as multiple solutions to puzzles and a twist ending. The second game on the list definitely was released for the PC though, so this epic journey kicks off with a little adventure game called Below the Root. Prior to researching for this blog, I'd never heard of the game, nor had I heard of the Green-sky series of books it's based on. A simple Google for "Below the Root dosbox download" gave me all I needed to check it out.

The Green-sky Trilogy is a fantasy series of novels written by Zilpha Keatley Snyder between 1975 and 1977. The books had a very strong following, and it seems the majority of these fans were completely disgruntled by the way the third book concluded. Realising there was no way to go back and change the ending now that the trilogy was published, Snyder was disappointed that she'd let her readers down. Around the same time, a programmer named Dale Disharoon approached Snyder to see if she was interested in making a game based on the world she'd created. Immediately seeing this as an opportunity to continue the story, and hopefully produce a more satisfyingly conclusion to her series, Snyder gave Disharoon an affirmative response. 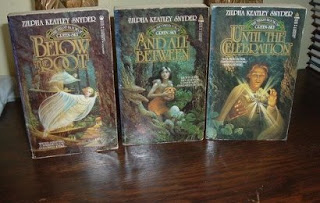 
The world of Green-sky is a low-gravity planet and could be considered utopian for the most part. Residents, called the Kindar, live in tree-houses built upon the branches of large trees, and the low gravity allows them to glide between the trees very easily. They have green skin and their hair blossoms naturally into flowers. The community is ruled by godlike leaders known as the Ol-zhaan, who have banned emotions such as anger and sorrow from the pacifistic society. A combination of meditation and narcotic berries helps the people remain calm and joyful at all times. Infants are born with paranormal powers and while these were originally retained right through to adulthood, they’ve strangely faded away earlier with each successive generation.


The Kindar fear the forest floor due to the legendary monsters called pash-shan that apparently live “below the roots” of the trees. Snyder’s trilogy of books follow a novice Ol-zhan named Raamo and his friend Neric as they venture down from the trees to see if these monsters really do exist. Instead they find dark skinned descendants of their own race called the Erdlings who had at some point been exiled from the upper world. They are a more advanced people, making use of fire, metal and even building steam propelled railway transportation. The Erdlings have no restrictions around having “unjoyful” emotions and appear to still retain their powers into adulthood. The rest of the series follows the efforts to release the Erdlings from exile while keeping the status quo of Green-sky. Disgruntled Ol-zhaan and vengeance seeking Erdlings (called the Nekom) cause trouble. 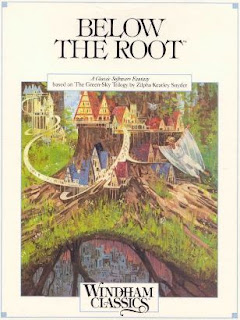 While I haven’t read the books to know exactly what occurs at the end that was so controversial, it’s at this unstable phase that the video game storyline takes over, officially acting as a fourth volume in the Below the Root canon. I’ve managed to get my hands on what appears to be an OCR’d text only version of the game manual, which will undoubtedly be beneficial given all the information in there regarding the different characters you can play as, the various spirit skills at your disposal, a dictionary of jargon that would otherwise only be known to readers of the trilogy, and a bunch of hints to help you get started. If anyone knows the whereabouts of a PDF version of the manual including images and the map that apparently came with the game, I’d love to hear about it. A quick search for a map online brings up something that looks to be a fan made spoiler rather than the original, so I’m going to avoid that one.
Below is the message in the manual that gives a fairly ambiguous idea as to what I’m supposed to achieve in the game.
You have arrived in Green-Sky just in time to discover a hidden secret of momentous importance that will stop the headlong slide of our land toward certain disaster.

Last night these words came to me in a dream:
The green light pales.
The spirit fades away in darkness lying.
A quest proclaim!
Godspeed to all who seek. Bid them haste.
The light is dying.

Only you can solve the riddle of my dream and save Green-Sky.

Ours is a beautiful and fertile world, covered with lush and enormous trees and plentiful wildlife. Yet peril and fear abound. We tree-living Kindar and our Erdling cousins, estranged for many years, were reunited by a spirit-gifted boy named Raamo. Now he is gone, and Green-Sky is threatened with destruction.

As a Kindar or Erdling quester, continue the work of Raamo. Seek the secret everywhere, from thin fronds of the roof trees to dark tunnels that lie below the root. Grow strong in body and in spirit skill.

Meet the inhabitants of our land. Many believe in your quest and will assist you. But beware, some of those you encounter are not what they appear to be.

The map enclosed will help you find your way. Go quickly. May you find the hidden secret and save Green-Sky.

Until we meet,
D'ol Falla

I'm actually pretty intrigued at this point, and finish this post eager to find out not only what all the above means, but also to get a first glimpse into the dynamics of the game.
Posted by The Trickster at 23:08

Email ThisBlogThis!Share to TwitterShare to FacebookShare to Pinterest
Labels: 1984, Below the Root, Introduction