My first post about Below the Root, with all the talk of spirit skills and series-specific jargon, most likely gave the impression that this game might only be enjoyable to fans of the books. I thought the same to be honest after my first attempt at playing the game was ultimately a confusing and daunting one. I struggled to know which character to play as, where I actually was without any form of map, and what half the options were in the menu system such as Pense, Grunspreke and Kiniport. Picked up items such as shubas and trencher beaks held no meaning to me either, so it quickly became apparent that, unlike games today with their built in tutorials, I was going to have to read the manual before and during playing Below the Root. 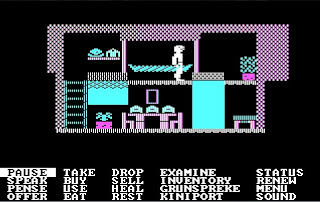 Shall I rest or grunspreke? I just can't decide!

Thankfully, the game and manual do actually give you plenty of guidance if you're willing to put in a few minutes educating yourself. A brief little intro summarises your goal in the game, you can watch a reasonably lengthy example of the games basic actions by choosing Sample Quest from the opening menu, and the manual describes all the menu items and player choices adequately. I highly recommend anyone playing the game pay close attention to the "Some Final Words of Advice from D'ol Falla" section before starting. A lot of my confusion could have been avoided by reading this prior to floundering around Green-sky. I also conducted a more extensive search for the game map as the manual mentions its importance, and as you can see below, I managed to find it here! 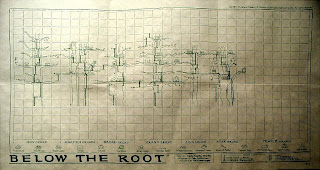 Time to get out the pencils!

Having perused all of this material, I set back off on my quest, more adequately equipped to handle the alien world of Green-sky. I have to admit that I didn't think I would be choosing characters to play very often during the creation of this blog. Some adventure games, such as the Quest For Glory series, would eventually toe the line between the RPG and adventure genres, but they were considered quite innovative at the time (in the late eighties / early nineties). I was certainly surprised to be confronted with character selection in the very first game on the Wikipedia list. There are five characters to choose from, three of them being Kindar while the other two are Erdling. They all range in strength (which controls how much they can carry, how far they can jump, and how often they require food and rest) and spirit powers (which governs which of the spirit skills they are capable of using). 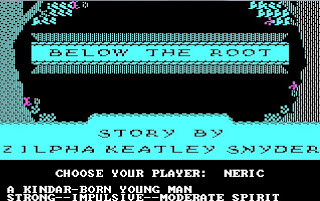 I chose Neric as he seems a good, safe mix of strength and spirit.

With my character chosen, the game begins in his home (called a nid-place). Here I picked up some food, a shuba (which I now know allows me to glide) and three tokens (used to purchase items in shops). The graphics have that very distinctive CGA look that appeared in numerous games in the early eighties. Given black, cyan, magenta and white are the only colours onscreen, programmer Disharoon did a pretty good job of making Green-sky feel alive and fairly easy to navigate. Choosing the Status option from the menu brings up useful information such as what day it is (I have fifty days to complete the quest apparently), what time it is, and my current spirit maximum and stamina. Most importantly, you can keep tabs on how long it will be until you need to find a place to rest and food to eat. If either of these reach 0, as I quickly found out, your character will go unconscious and wake up in their nid-place a day later.

Once I left my nid-place and began exploring World-sky, I soon figured out by cross-checking with the map that I was situated in Star Grund (the enormous trees are called Grunds and the map suggests there are eight in total to explore). Not really having anywhere in particular to be, I started wandering around Star Grund talking to the numerous occupants that reside there. I tried out some of the menu options available and found that Pense is particularly useful. Every time your character is close to a Green-sky resident, you can select Pense to see what their emotion towards you is. Those that feel friendly emotions, such as Kindly Warmth, will give you advice or offer you services such as a place to rest or some food. Others will be less sociable and will likely trick you and then trap you. I learnt very quickly not to accept rest every time it's offered, as my first acceptance resulted in me waking up in some sort of prison cell. With no apparent way out, I was forced to "renew", waking up in my nid a day later. If you're as vocabularily (see what I mean!) challenged as I am, you might want to use a dictionary every now and then to see whether residents mean you kindness or harm. 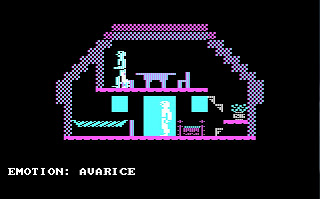 You're feeling what? Can you give me another clue?!

Moving around the outside world is a bit like your typical platform game, with the main difference being that there's not much in the game world that offers up much danger (at least not that I've come across). I occasionally cause my character to hit his head or fall too far, but I'm not sure this does much other than reducing your food and rest stats. At this stage of the game I don't believe there's any way to actually die. Jumping off branches and gliding can give you access to otherwise unreachable areas, normally rewarding you with items such as tokens and food. I've definitely got more questions than I have answers at this point and I'm really quite eager to explore all the grunds and unlock the secrets of the game. Where do I find the key to unlock the Temple Gate? How do I get that sword I could see from the prison cell and what would I use it for? How long will it take to gain enough spirit points to try out some of the other skills? 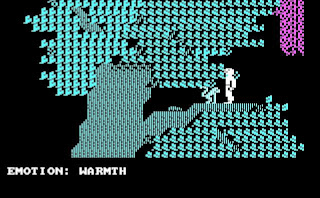 The monkey seems to like me, but offers little purpose from what I can tell.

I've managed to gather a bunch of clues in my travels such as "Speak with star if you have the power", "Find the wise child of the garden" and "Seek the hermit of Grand Grund", the later of which I managed to achieve during my first couple of hours play. Thankfully, when I came across the hermit's house on the very top of Grand Grund, I'd already got my hands on a trencher beak, allowing me to cut through the brambles surrounding it. In speaking to the hermit I was rewarded with five more spirit points and surprisingly told that I now have the ability to pense messages. I thought I'd already been using the pense function to its full potential, but apparently to this point I've only been pensing emotions and not messages. Perhaps going back and talking to all the residents I've already come across will bear more fruit now? 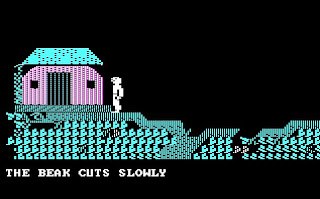 Respect the Beak! Tame the brambles!

Meeting the hermit also caused me to have a vision describing the body of Raamo sinking beneath the surface of the bottomless lake...whatever that means. The fact that I really want to find out shows how much I'm enjoying Below the Root! My initial concerns have very quickly diminished as I get used to the terminology and gameworld, and not even the primitive graphics and fairly non-existent sound can dampen my enthusiasm to continue my journey. The only way I can do that is if I stop blogging, so...
Posted by The Trickster at 19:53

Email ThisBlogThis!Share to TwitterShare to FacebookShare to Pinterest
Labels: 1984, Below the Root