Return of the Phantom - Knowing the Future (Request for Assistance) 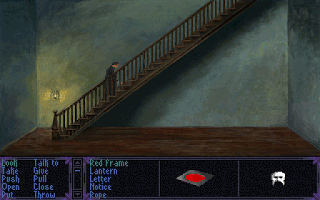 Yes, up and down all those flights of stairs

Before I returned to Madame Giry, I thought it best to check out the dressing rooms, since I haven't been there yet in this time period. Unfortunately nobody's there yet. I'm almost glad there haven't been many real puzzles yet, because having to navigate across this game is tedious. 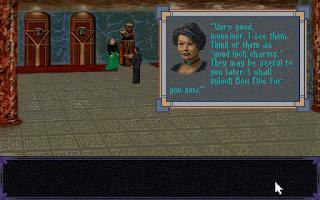 After returning to Giry, she tells me to refer to the colored frames as "good luck charms", before opening box no. 5 with a flourish. Inside, there's a note from the Opera Ghost, telling me to leave Miss Daae alone or I will suffer a great malady. What's next isn't a mystery, I already found the secret door; In the left column, which I thought was a clue. No, I just got lucky, there's a right column too. All I need is a key.

Now, since I need to find a key anyway, I'll walk back through the house. If I were treating this seriously, I'd take that fire ax and use that to break down the door, but the game developers aren't likely to be following my train of thought. I guess the manager would be a bit miffed, but I'm trying to prevent a murder and the loss of untold francs! What's one column compared to that? 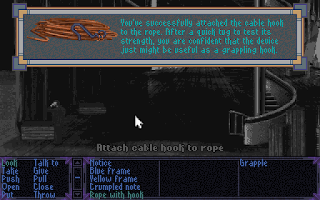 On my way back, I realize that a small graphic on one of the boxes backstage is actually a hook...which I can use to make a grappling hook. Looking at the stage, apparently there's a shortcut into the orchestra pit. 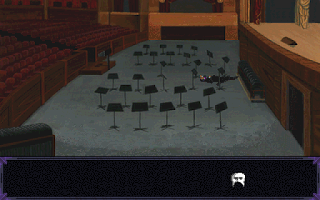 I'm genuinely surprised that the game will kill me, allows me to kill
myself in this fashion, and be merciful about it

...and I'm dead. The game then deposits me back on-stage, seemingly no worse for the wear. Onto the dressing rooms...again. Christine is back from here errands and we can hear her singing voice. Talking to Christine reveals a lot about past Raoul and Christine's relationships. They knew each other as children, but lost touch until recently, and Raoul's been very supportive of her career. Her father, who is dead, sent the "angel of music" to her. She never sees him, just hears his voice from the walls. He doesn't appear when anyone else is in the room. You know, it bothers me that people supposedly speaking French, but translated into English for the sake of the audience, then inside that translation speak French. Raoul can't be bothered to hack up someone who murdered someone,
but someone getting mushy with a woman who thinks she's his girlfriend, oh, no!

But surprisingly, she's been having dreams just like present Christine about a masked man. At this point she sends me off so she can practice with the angel of music. Naturally, Raoul decides to listen in at the door. The angel comes in, and speaks romantically to Christine, who responds likewise. Raoul, despite not being the Raoul in a relationship with her, decides he should break in. Now I can use the axe. That's the emergency. Ha! The game implies the mirror is a door, but we can't do anything. 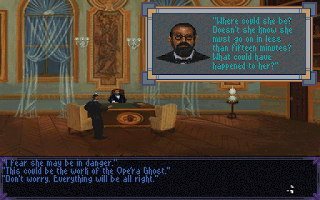 Some time later, when Raoul finally makes it back to the office, the manager and Raoul are discussing what has happened to her. Then Christine walks in, and apparently nothing awful has happened, she even got Raoul a complementary box seat ticket. Uh-oh. I smell a trap! Not quite, but the ticket is with a note that says to meet her after the performance, because she's in danger. 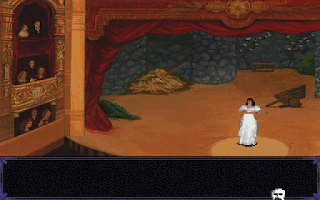 Well, we know she's not going to die, since the other Christine will exist

Once again, the opera starts...and then the Phantom makes his move. In this case, he rappels down a rope, and with a swing of his cape disappears, along with Christine. Why he didn't just keep her in his dungeon...? I dunno. One hour later... 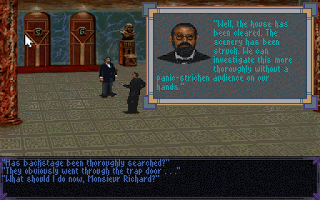 Much like in the present, my friend wants me to investigate. I should talk with Jacques, he says, the man under the stairs. 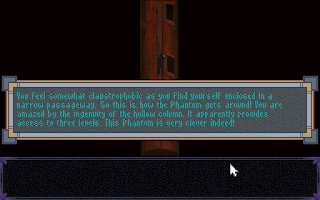 The horror, the horror

I feel like the shock of this is lessened somewhat by the fact that I had to walk all this way and I barely knew the man. We already know the Phantom murdered someone. The Phantom dropped the key here, much to my surprise. I thought I would have to do something for once, instead of just summarizing the events of the game. I know a few of you said you never beat this game, and at this point I'm wondering why. Even a child could get this far. (This, as it turns out, was the wrong thing to say)

Doesn't seem like anything, but as I'm examining the upstairs area, it occurs to me that I never found out what the "easy" interface is. Oh, just the standard Lucasarts-style interface, where you don't have to hold down your mouse button to see what's in an area. This is all wrong! You instead have "standard" and "ass backwards". 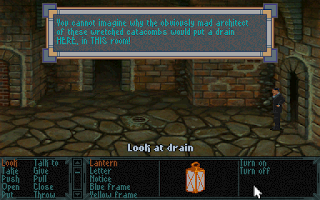 You know, I don't really care if one of the architects stuck one on top of a door!

From the Phantom's box, I can enter a secret shaft. Three floors, but I can't unlock the top door just yet. Down it is. To the sewers and catacombs...and its a maze. Its a maze. Just what I wanted with this walking speed. There are gates, there are drains, there is just no consistency to this map. The game has the audacity to act offended when I try the key on those gates too, so the game is really just screwing with me at this point.

SOME TIME AFTER THE HEAT DEATH OF THE UNIVERSE... 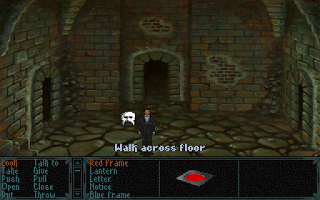 Oh, you thought I was done!

The maze is a particularly cruel one, at least for a graphical adventure. There is no way in hell you're getting out of here without making a map. There are too many rooms that just lead back to an earlier room, and at the end a series of rooms that aren't even distinguishable from each other as a final, **** you. The only way to figure out where you are is to walk to a new room, and then back to the room just outside this section of maze. If you can't, well, mark off that exit and reload. Hope you didn't save in the wrong place or anything, and you remember where you are. I'm harping on it, but uh, you'll understand considering this has been a shorter entry and I still needed to ask for assistance. 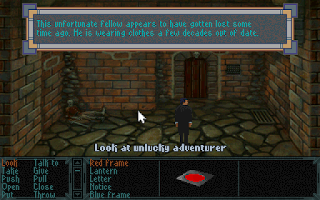 Is this supposed to be an insult towards Indiana Jones? That didn't work well, did it?

The maze ends in front of a locked door, next to an adventurer, possibly from the early 1800s. He has a sword I can take. 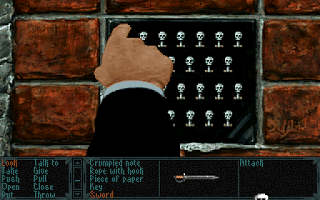 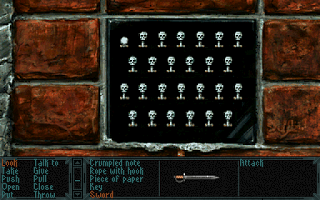 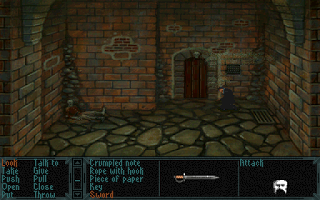 And I'm dead, but the game just returns me to the start of the room

Since this is the only room left, outside of the endless same room maze back there, I have no choice but to try to solve this puzzle now. Let's see, there's no nearby hint. Twenty six switches, I can only pull four, and those four can be in any order, so I guess 416 possible combinations. If it takes me 30 seconds to do one solution that's about 3 and a half hours dedicated to this puzzle alone. Brute force is NOT an option. There are three different designs of skull, none of which are limited to 4. None of the items I have work. Does the door open if I chose a number of skulls with the same pattern from top to bottom? There are two, and I try both, neither work. Clearly, this is a find the password puzzle, not one of any skill on my part. 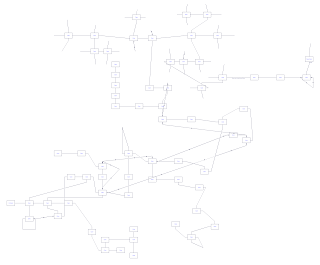 The map, yes, it is the ugliest maze ever made

So I reload earlier in the game, before the maze, and look around. There's nothing back in the Opera House. Request for assistance time. Is there anything I missed in the maze? Were I not blogging about this game, I would have searched a walkthrough the second I realized this maze was that bad, assuming I didn't give up before then. If not, what am I missing?

Email ThisBlogThis!Share to TwitterShare to FacebookShare to Pinterest
Labels: 1993, Morpheus Kitami, Return of the Phantom