It's again a time to celebrate the start of a new year with a round of Missed Classics. Just as 2010s are changing into 2020s I am about to come to an end in my own Level 9 marathon by playing, first, The Price of Magik, and then, The Growing Pains of Adrian Mole.


I said an, not the end. With these two games, a certain phase in the development of Level 9 is coming to a close. Looking back at all the products of Level 9 I’ve played, it seems that their most creative phase was with their four first games. Their first game, Colossal Adventure, itself mostly just a feat of importing an existing game from mainframe to PC, served as a template for all their Treasure Hunts, by which I mean a game where the main goal (aside from possible end sequence) is to maximize your score by collecting as many treasure items as possible (treasure items being usually, but not always, of no use beyond their role as treasure). The most perfect example of a Treasure Hunt in Level 9 collection was their third game, Dungeon Adventure, which.got rid of everything superfluous, like end sequences, and concentrated on looting treasures within the most fiendish puzzle box the developers could think of.

The second Level 9 game, Adventure Quest, could be said to form a template of Travel Story, where plot progression means basically advancement into a new map area (although backtracking might be allowed) and where main goal is to get to the final room (and possibly carry something into the final room or do something there). Travel stories Level 9 perfected with their fourth game, Snowball, where you have to move through a spaceship full of dangers into the final room where a terrorist is hiding with a bomb.

After this first round of creativity, the development of Level 9 games has been mostly technical - they added pictures and streamlined their parser - while most of their games still used the two templates. Lords of Time, Emerald Isle and Red Moon were again Treasure Hunts, although two of them tried to hide this fact with a meatier plot. Return to Eden, on the other hand, was like a bad parody of a travel story, with player walking through disconnected areas containing various threats to a trial, which they will lose unless they carry the right items with them.

This doesn’t mean Level 9 had completely stopped innovating. Interestingly, their imaginative side showed most with their games made for Mosaic. Partly these innovations must have been caused by a desire to make easier games. This is especially true with their take on CYOA genre, where The Secret Diary of Adrian Mole served as template and The Archers brought that template to fruition, especially by making the point system of the first game more sensible and giving real options for the player.

A more interesting novelty was what I could call a Game of Exploration, to which The Saga of Erik the Viking served as the template. The idea behind the name is simple. After a short introductory sequence, game world - big, but empty, as has been the case with Level 9 games - opens up almost completely, with only few hidden and/or closed spots. The task of the player is to explore this world, with no real idea what to look for (there are even no treasures to be discovered), and find the key items required for triggering the end game. This template was perfected in The Worm in Paradise, where the dystopian-bureaucratic context and the amnesia of the player character made the mindless exploration understandable.

The reason of this long prologue is that I feel The Price of Magik falls squarely into the Exploration type. It at first seems like it would be another Travel Story, but then… and now I am getting ahead of myself.

Let’s begin with the premise of the game. The Price of Magik continues the story of Red Moon, which was basically a tale of finding a stolen artifact (titular Red Moon of Baskalos), which was the source of all magik. In this game, the artifact is stolen again! The supposed guardian of the Red Moon, Myglar, wanted to make himself immortal and channeled all its energy to this task. Because of this, Red Moon is about to fade and magik will disappear.

Manual reveals also that the player was transferred to the House of the Red Moon magikally, after blowing and exploding a big red balloon found in an attic. I have a feeling nothing at all will be heard about this story in the game itself. 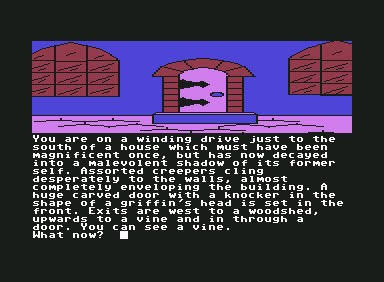 At the beginning of the game I found myself at the driveway outside the yard. There was a woodshed, leading to a herb garden, each containing a number of objects, some of which required some small scale puzzle solving (for instance, I could use a candle to burn a pile of wood into ashes).

The house itself could be entered from two directions - through the front door or by climbing a vine to the attic. It was completely dark inside, but herb garden had contained some eyebright flowers, which were said to miraculously improve vision when rubbed into your eyes. 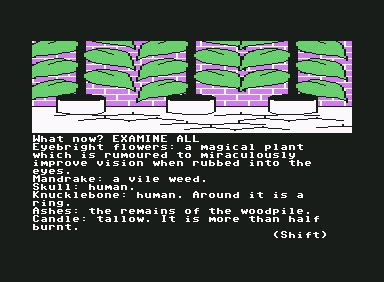 Let’s start describing the house itself from the top. There was a small attic, consisting only of few rooms. Among other things, the attic contained a mirror, which I could cut to pieces with a diamond ring. Beyond the mirror I found a prism, which had the word XAM written on it.

This is the perfect time to speak of the magic system. Just like in Red Moon, you need two things for doing magic - spell word and corresponding focus. In Red Moon, the spell words, the required foci and the effects of each spell were described in the manual. No such luck here. Spell words - always consisting of three letters - are scattered around the game world, for instance, examining the knocker at the front door revealed the word ESP. Helpfully, if you try to cast a spell, but you don’t yet have the focus, the game will tell you what focus you’ll need.

Spell words seems to have some relation to the effects - you could think XAM might be about examining and ESP about telepathy - but it needs some research to verify what a spell actually does. As a book found within the house has told me, the game has three kinds of spells - spells you just cast generally, spells you cast to some direction and spells that you cast at some object/character (player included).

Interestingly, magic affects your characteristics. You start the game from the ripe age of 20, and each spell you cast makes you older - when you turn 100, you die. Magic is also connected to your sanity - the less sane you are, the more power your casting has. Naturally you want to reduce your sanity as much as you can, so how do you do it? Well, finding spell words and foci and casting spells for the first time does this. In addition, there are other events that shake your sanity - for instance, if you knock on front door, some nameless monster appears for a second and frightens you. 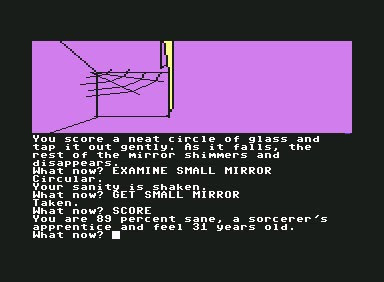 So, you’d think the game would be spent in searching new spell words and foci. Yet, the very first spell I found changed this radically - when I used XAM at any focus, I would learn what spell it was a focus for, thus making all spell words hidden in the house redundant. I then quickly learned that one focus - a piece of mirror I had just acquired - changed the game even more radically. The mirror let me cast ZEN, which gave me access to “mists of time”, which was essentially just a quick way to access nearly all of the map and even places that at this point would have otherwise been closed off from me (changing this from Travel Story to a Game of Exploration).

I decided I wanted to play this game more organically, learning spell words as I discovered them in the house and accessing new places only after I had solved the necessary puzzles (like Captain Kirk said, we are meant to fight our way through and claw every inch, not stroll to the sound of flutes). Back to mapping, then. Since most of this was pretty humdrum, I’ll try to be terse, indicating only the more interesting things I found and puzzles I solved.

The most interesting thing in the second floor was a bat that started to follow me. It took me a while to get this, but the HYP(nosis) spell let me command creatures. When I HYPnotized the fellow, it helped me to catch a moving wheel (another focus). Other puzzles on this floor were simple, once I found proper spells. There was one secret room containing lever, pulling of which released a sword. I also found an inscription of a spell on a roof, which I could read only by using the spell FLY on myself.


Finally, there was a room full of chests of many different colours. Opening up a wrong one created an explosion that hurt my stamina. It all came down to using the DOW spell - meant for checking if an item is magical - to find the one I could open safely, Inside, I found some salt.

The bottom floor was the largest in the house. The most remarkable thing I found in it was the Red Moon I supposed I was searching for. I couldn’t take it, because its magic gave me a jolt, but touching it rejuvenated me, making my age quite irrelevant. I also could levitate the Red Moon with my FLY spell, revealing yet another spell word (DED).

In addition, I met a ghost, who was willing to give me its old armour, if I just buried all his bones, scattered in few places. I had already found a shovel, and a good burial place was in the garden. 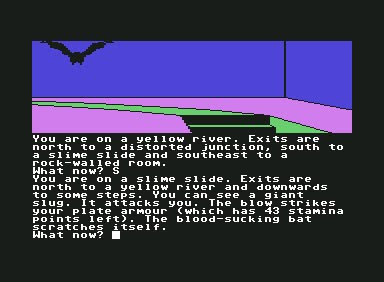 I also met my first hostile creatures: werewolf, wight, skeleton and a giant slug. The game has a combat system, but just like in Red Moon, I assume it’s completely useless. Indeed, I could walk around the wight, the skeleton wandered from one room to another and the wolf was scared of wolfsbane. And the slug? It didn’t like salt.

Beyond the slug opened up a whole new, underground section of the game. Having now searched through the house proper, I think it’s best to end the post. The main problem, as in many earlier Level 9 games, is that the game world is too sparse in comparison with its size - I’ve spent most of time mapping, instead of solving puzzles.