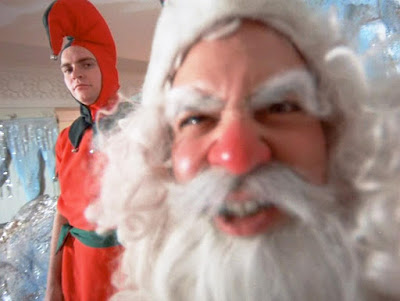 Our story starts in the fall of 2014 when a guy called “Trickster” had a blog that a bunch of people liked. You might be familiar with it because it is this blog. Trickster grew tired of writing about games and wanted to write about Star Wars toys or something instead, so he handed over the keys to a couple of his long-time readers and took off. At least, that is what we wanted you to think, but the truth is stranger than fiction.

We each have our own stories, but for me it started while I was driving home from work one night that October. I had TAG on my brain and was disappointed that I would never get to read a review of Space Quest IV or LeChuck’s Revenge. I pulled over to get some gas and spied a strange-looking trailer parked on the side of the road. It looked like something out of a renaissance fair, purple with wooden wheels and a bright red front door. I was just deciding whether to ask the gas station attendant about it when something smacked me on the back of the head.

I woke in darkness, my head covered in a sack and my arms tied. My unseen kidnapper ripped the sack off and my eyes struggled to focus in the harsh light. I tried to scream, but couldn’t make more than a squeak. My head was swimming, but my eyes started to focus on a desk in front of me. Eight beakers were set in a row, each containing a different colored liquid. A ninth and larger beaker sat empty in the middle. It all seemed familiar somehow. A shape stepped out of the shadows and in one quick move pushed all the vials and beakers crashing to the floor where they broke into a million multi-colored shards. The liquids bubbled and popped as they mingled on the floor and the room was filled with an acrid smell not unlike licorice. In their place on a desk sat one giant but somehow jolly-looking boot. Attached to the boot was a red-suited leg. I traced the form with my still-focusing eyes to find a red-suited man reclining behind the desk.

When I was a kid, I always dreamed of meeting Santa. Very few of those dreams involved being tied to a chair when I did it.

He paused for a moment to let my eyes adjust to the light. We weren’t alone: A raven-haired woman lay bound and gagged on the floor beside me, but she seemed uninjured. Her trailer looked like it had been ransacked. Tarot cards, now wet and stained by the fizzing liquids, lay in heaps on the floor. My gaze passed a broken abacus here, a cracked crystal ball there. My eyes were drawn to the red-suited man in front of me. His pose was relaxed, but his eyes burned into my very soul. I winced, realizing immediately that he knew all the nasty things I did in third grade. He probably made a list. To his left, I finally noticed an elf. His outfit looked jolly, but the red bow on the Louisville Slugger that he carried didn’t make it any less intimidating.

“What… what do you want?” I finally stammered. I was far too old to believe in Santa, but when you have him sitting right in front of you, you Believe very quickly.

Santa sat forward, scraping more glass shards to the floor as he set his booted foot on the floor. He brought his red-cheeked face so close to mine that I could smell the candy canes on his breath. “We know your heart’s deepest desires,” he whispered. “But it will cost you.”

“My… deepest desires?” What could he be talking about? “Seriously, you couldn’t mean…”

Santa sat back in his chair and laughed a deep belly laugh. He put up his hand to wipe the tears running down his face. “Okay, okay. Maybe not your deepest desires. You can keep those to yourself. ” I blushed.

The elf with the bat chimed in. “We know that you want to bring back The Adventure Gamer.”

The Adventure Gamer! Of course, I wanted to bring that back, but that wasn’t even in my top ten deepest desires. What were these guys thinking? I cleared my throat and tried to get into the spirit of the thing. When you’re being kidnapped by Santa, what else can you do? “Does that mean that you can bring Trickster back?”

Santa paused and let out a breath. “No,” he paused again. “Nothing can bring him back. Not even to review a pre-release copy of a Quest for Glory-inspired game.”

“But even without Trickster’s fine style, there is still a chance to bring The Adventure Gamer back... and you have a part to play.” Santa finished. I was speechless, but he clearly expected me to say something. Should I go for humble? Theatric? I was still tied and the last thing I wanted was to discover that Santa’s elf friend doesn’t just really love baseball.

“Tell me what I must do, oh Spirit of Christmas!” It sounded completely corny, but Santa laughed one of his red-cheeked belly laughs so I must have had the right idea. Even the elf cracked a smile.

Santa leaned forward as if to impart a secret. “Four sets of Goodly Spirits have been sent out around the…”

The elf coughed and Santa shot him an evil look. He cleared his throat and started again.

“Three sets of Goodly Spirits and some guy named Jim Walls have been sent around the world.” He paused to see if the elf was going to complain again before continuing. “Four fates and four penances can bring The Adventure Gamer back.”

My heart soared. Was it really possible to bring the site back? “What must I do?”

“You must be cursed!” the elf yelled. Even the gypsy lady on the floor jumped.

“Not a curse… a favor.” Santa corrected him. “A favor with consequences for failure.” This didn’t seem like the right time to argue semantics. Santa pulled a candy cane and a square package out from his oversized pocket. He nibbled on the end of the cane while he fiddled with the box. “To keep The Adventure Gamer alive, you have to play and review this.” He tossed a floppy disk labeled Merry Christmas from Melbourne House down on the table. I winced as it landed just inches from what was left of a pool of bubbling purple liquid.

“This? This is self-congratulatory adware. It’s awful. It’s barely even a game.”

“But that’s not all.” Santa’s tone turned deadly serious. “To keep The Adventure Gamer alive, you must review a different Christmas game every year. To miss even one year and…” He gestured to the bat that his elf friend still held.

“But…” I stammered. “Surely there can’t be that many? What if we run out?”

The elf smiled. He liked the sound of that.

Santa’s pocket buzzed and he pulled out a red and white striped phone. “Oh crud. Muriel’s having difficulty finding the address. I told her to turn left at the fjord; how difficult could it be?” The elf shrugged. “I’m sorry, but I’m going to have to deal with this. When you awaken, you’ll think this has all been a particularly stupid dream.” Santa reached over and touched my forehead.

And that is why I review a different Christmas game every year.


Merry Christmas! I hope you enjoyed our little holiday interlude. Come back tomorrow for A Christmas Adventure, a yule-tide classic from 1983.
Posted by TBD at 23:00