It’s time for the third OtherVenture and our second Jyym Pearson game Escape from Traam. This one has a 1980 copyright date and it may possibly be the earlier game of the two. It is usually treated as Pearson’s sophomore effort in text adventures but the sci-fi setting of his first game Zossed in Space (1980) may hint at a possible continuity between the two. However, I don’t have proof for this other than the copyright date of the TRS-80 version (Curse of Crowley Manor had a 1981 stamp), so I’ll just relegate this thought to the realm of speculation.


Introduction: The World Will Be Traam?

According to the one-page manual on the back of the original packaging (available at the marvelous Museum of Computer Adventure Game History, Escape from Traam has a game save feature, should be solved within a month and is written in machine language. The short description of the plot goes as follows:

Your small space cruiser is in trouble – and even though you survived the initial crash on a bizarre distant world, you may soon wish that you hadn’t! The alien environment of Traam is replete with incredible wonders and sights which no human eyes have ever beheld. You must escape this dangerous world; but be forewarned that if your decisions are not tempered with intelligence and caution, you may not see home again!


That does not bode well for me. My decisions are often tempered with caution but rarely if ever with intelligence, so I am prepared to get lost on Traam forever. 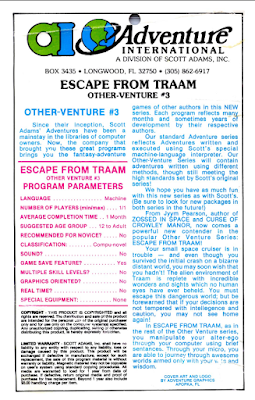 I’ve learned from Jyym Pearson’s previous game that it’s a good idea to take a very systematic approach to everything which means to look, listen, smell and feel frequently, try out every exit even if it’s not listed (this will be only N, S, W, E and CLIMB) and talk to everyone I might encounter, several times if possible. The last game did not contain any guess-the-verb tirades or unsolvable bottleneck puzzles, hence I’m fairly optimistic about this one, too.

The game begins with one of these scripted events that are a sort of Jyym Pearson trademark, at least in the early 1980’s. I am in the cockpit of my space ship, meaning that the crash described in the manual has not yet happened. Knowing that I will survive, I decide to simply wait it out as I don’t seem able to interact with anything. Looking reveals only that the ship is losing altitude. A forest is underneath me which is where I will probably end up. A control panel is in front of me, and a closer look reveals that it is smoking. This can’t be good. Suddenly an alarm beeps and a light blinks on a green panel. The light says “engine failure.” Soon, the ship is going down, and, predictably, I survive the crash landing.

Now I am in a small forest clearing. My wrecked ship is strewn everywhere. Time to start exploring! Looking at my ship nets me a nylon rope, and ropes are always useful in adventure games. The rope is about 15 meters long. Examining anything else just tells me that “large mettalic [sic!] scraps are scattered about” and “the ship is upside down.” When I try to turn the ship, the game just says “turn, turn, turn..”, bringing back repressed memories of Deathmaze 5000. I can’t roll or flip it; maybe there’s nothing there. The only possible exit is south, and if I go there I am facing a sheer cliff. This sounds like something the rope would be useful for. Examining the sheer cliff reveals there to be a “stout bush growing near the top.” I can tie the rope to that stout bush and now it’s possible to climb to the crest of the cliff. The only exit is to the east, leading me to a brush thicket where I encounter a large alien warrior with an insect head intently studying a map. For me, the map is just as unreadable – it “is in symbols”, the game tells me –, and the warrior speaks to me in a strange language: “TFRBY AW HXW YCOV SBV VFCD RH XWFW.” It’s not ROT13, unfortunately. The third and the last word look suspiciously like “the” and “here”, hence the Ws might well be Es. Replacing those gets me XXXXX XE XXE XXXX XXX XXXX XX XEXE. If I follow my hunch, I get XRXXX XE THE XXXX XXX XXXX XX HERE. Hmm, not much better. Could the second word be “me”? That still doesn’t help me with the rest. Let’s try the short words first: RH must be a two-letter word without either H or E. IS maybe, or IT. SBV...could that be AND? Let’s see: XXINX AE THE YCOD AND DXXX IT HERE. The second word could be “me”, and then it would probably be BRING ME THE “YCOD” AND DXXX IT HERE. DROP it here? I think I’ve got it: BRING ME THE GOXD – it’s GOLD! – AND DROP IT HERE. He also says another thing that will prove or disprove my theory about the first sentence: “UORAT HXW YCOVWB HFWW SBV KSHUX ZCF HXW HFSSAG HXWM WSH WSFHXORBYG.” Let’s see: *LIMB THE GOLDEN TREE AND *AT*H *OR THE TRAAM* THE* EAT EARTHLINGS. Err...I’ll buy a C. CLIMB THE GOLDEN TREE AND *ATCH *OR THE TRAAMS THE* EAT EARTHLINGS. Wait, have I coincidentally stumbled into Captain Blood? “Laugh, laugh”, my friend? CLIMB THE GOLDEN TREE AND WATCH FOR THE TRAAMS THEY EAT EARTHLINGS? Fair warning if that’s true.

That was a painful but interesting first puzzle. Let’s see what else I can find around here. The only exit is south; it leads me to a small valley. From there I can climb up a hill and get to the edge of a strange silver stream. The liquid steams and the stream is described as “eerie.” Maybe I should not yet cross at this point. Going back north I discover a cave entrance. Looking at the valley reveals the cave to be dark inside. Are there grues on Traam? Predictably, I can’t see a thing inside the cave. None of the exits work but maybe I’m not stuck yet. Climbing lets me enter a small deserted cabin where everything is in shambles. Let’s take a look at this mess! Unfortunately, there is only a large trunk which is locked. At least the cabin provides me with an exit to leave the dark cave. I’m still out of options so I return to the ship to see if I may have missed something there. This time I try to move the ship, and that works. I find a hand laser. But what should I do with it? Threaten the peaceful alien warrior? That seems unlikely.

I try everything in every location once more. It seems that I’ve overlooked an exit on the hill. Going west from the edge of the steaming stream leads me up the actual hill. Looking doesn’t help but if I “look tree”, suddenly there’s a frond that I can pick up. This is quite a fluke and doesn’t make any sense at all. The tree(s) are not in the description, I simply assumed that on a “wooded hill” there would be some. Escape from Traam starts out much more unfairly than its predecessor and so far I’m not too happy about that. The frond turns out to be a very stiff leaf but I have no idea where I could use it. It won’t open the trunk, I’m sure. Am I meant to stumble through the darkness of the cave? Do I move when I walk into any of the directions? Is this like a maze?

When I try to retrieve my nylon rope to have more items available for some mapping (in case it’s a maze) I can’t seem to get it back. With only two items this is going to be a major pain, I assume. Dropping items proves my assumption right, though. I am moving inside the cave although it’s too dark to notice. It’s back to looking, listening, maybe even feeling everything now. I also try to climb in every room as I had some success with the cabin already. In the next room, I am successful right away. Just where I dropped my hand laser, I bump into an object when I look. Feeling the object reveals it to be steps. And climbing gets me to an ancient room. Only trial and error will get you so far, I’m afraid…

At least my code-breaking exercise now enables me to read the inscriptions on the walls: HXW SOUXWARGH must mean THE ALCHEMIST. I also note that the letters A through N simply correspond with their counterparts from M to Z. S through W equal A through E, only the remainder (O, P, Q, R, X, Y, Z) is a bit jumbled. Going back up (heading north) I notice that the cave only consists of two rooms – the cave entrance and the “object” room. Downstairs, I can follow a three-part ancient stone hallway. At its northern end I can see a hole in the roof but nothing else. When I climb, I emerge in a small forest clearing, surrounded by the parts of my wrecked ship. I have come full circle now and it feels like a good place to stop. Escape from Traam feels a lot tougher and more random than Curse of Crowley Manor. Let’s hope that I’m wrong about that, and don’t forget to guess the score!