Gobliiins is one of those games, which definitely have flaws, but still manage to be, on the whole, charming and fun to play. It will be interesting to see whether the good parts will manage to outweigh the weaknesses or not.

The peculiarity of Gobliiins as an adventure game is undoubtedly the division of game into different “levels”, all of which consist of only one screen. This design choice certainly has its positives - it effectively prevents all dead ends, since all the items needed for solving a puzzle must be at the same level as the puzzle. Even from the viewpoint of actual gameplay there is lot to commend in many levels, with their tight and connected puzzle sequences.

Problem is that the levels are so uneven. With a more regular adventure game I might not even mention puzzles that are neither good nor bad, but largely forgettable, but here, when they take up one whole level, it seems like a waste. Even worse are levels where the moon logic goes a step too far or where even the goal of the level is far from clear. The latter happened often, when what I did in one level became understandable only when I had reached a future level - for instance, if in one level I was meant to procure an item I would need in the next level.

Interfaces are becoming simpler and Gobliiins is no exception to the trend. Two of the goblins can just move around and do things, while third has only the additional possibility of picking up or dropping things. It’s still not completely simplified, since hotspots are not marked in any manner, but this is a minor issue. Health bar is an experiment that I hope I won’t be seeing in the future games of the series. A more important fault is the occasional clunkiness, where a goblin refuses to pick up an item it has just dropped somewhere or where new objects cover the old ones so that they cannot be picked up anymore.

You might say there are two inventories in the game: the text-based one-item inventory, and the inventory of images of four magical items, with white line under the items in your possession. Both are a bit too simple for my taste.

The story manages to balance somewhere between epic and comic, never taking itself too seriously. But while there’s nothing wrong in the story line, narrative means were far from satisfying. I might have accepted that a game made in 80s would contain major plotlines in the manual, but here it just made following the progression of the story more difficult. Furthermore, the division of the game and its story into discrete levels didn’t really help, as the goblins appeared to occasionally have knowledge of events in future levels.

Coktel Vision has always had a knack for making decent sounding music and they did not fail this time either. There are some nice tunes that I found myself humming couple days after I had played the game. The only problem is that there’s still so little music in the game. Graphics, as is usual in French games, are professional, and the cartoonish style well suits the game.

I congratulated Putt-Putt of its wealth of hidden animations and I think I must do the same here. Every new action I tried could give an occasion to some hilarious gag, and part of the fun in the game was to uncover all sorts of Easter eggs. Furthermore, the overall silliness was refreshingly consistent with what the game was aiming at. There is something very childlike and innocent in the silliness of the game. And indeed, if your kids are into Looney Tunes and you don’t require them to play only educational stuff, you might spend some good quality hours playing this game with them.

There’s very little text in the game overall, and most of it occurs between different levels. All of these intermissions are also spoken. Most of the actors sound really unprofessional, but at least their delivery is passable. There’s one particularly annoying actor, who tries to sound like a goblin and uses so high a pitch that it grated my ears. 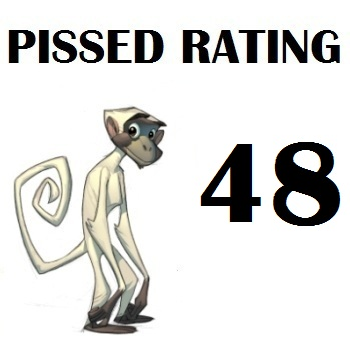 And so another game falls into forties. It seems we’ve had recently quite a lot of games that excel in some areas, but are not so satisfactory when regarded from other viewpoints.