The English game development studio Core Design is first and foremost known for the Tomb Raider series, being the creator of one of the biggest franchises in video game history (and solely responsible for the rise of Eidos Interactive, their parent company, that would still be active as far as 2009, where it was purchased and absorbed by Square Enix). However their story begins much earlier than that with another cult classic: Rick Dangerous. This Indiana Jones inspired platformer was one huge hit during the Amiga golden days (and one game I really loved despite being utterly incapable of going past the fifth screen or so). Also responsible for other (less cult) classics such as Impossamole, Heimdall and Chuck Rock, the studio saw the rise of adventure games as an opportunity, and basically decided to get their shot at the genre that was printing money for Lucasarts and Sierra in the 90s.

Various reviews from the time being are pretty enthusiastic about the game, deeming it “best adventure game on the Amiga”, Amiga Power even going to the extent of writing “...with a few tweaks here and there could have easily beaten the Monkey Island and the like”. The more recent reviews, however, are way harsher with the game, deeming it “nearly unsolvable” due to illogic puzzles and badly designed action sequences (gloups). The game seems to be trying new things, mainly with the fact it’s totally dialogue-free (whether this is a good or bad thing we shall see) and its interface (and as history has shown, a new interface tend to be more often than not a VERY bad thing).

My previous experience with the game was a short one. I remember being charmed by the graphics (and the fact that, as a non-English speaker I didn’t get many options for adventure games in 1992) but I also remember abandoning the game pretty fast during an underwater section because I couldn’t figure out anything about the puzzles… We’ll see if I’m able to go further on this try (let’s hope so!)

The story, as told by the manual, tells us that the mysterious and magic land of Enchantia is being governed by a band of evil witches, and that the inhabitants are suffering under their dark reign. One of the witches outshone the others in her malevolence and depravity (sic) and came with a devious plan to obtain eternal youth. It then tells a very convoluted and unnecessary backstory about how the witch trapped the other witches in order to put a spell on a field in another dimension (ours) in order to trap a young male child (something that was apparently non-existent in their dimension, which leads me to believe I would be interested to know how said inhabitants were still alive. Maybe we have a Children of Men-type substory? Or maybe I’m reading too much into it). Anyway, after a long struggle and conflicts amongst the witches, the result is that Brad, our hero, was playing baseball with his sister Jenny and ZAM! He disappeared from the baseball field to reappear in a prison cell. 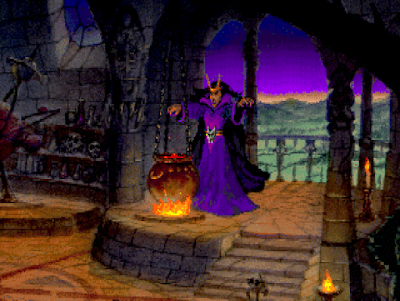 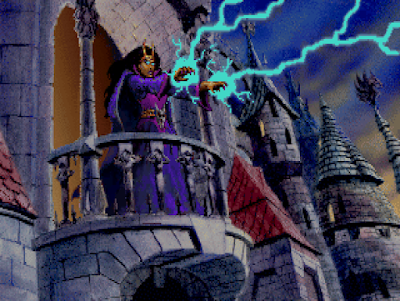 The classic, almost cliché, story of a young kid being suddenly trust into a fantasy world always works, reminiscent of stories like Alice, Oz or The Neverending Story. It’s a story seen many times in video games, probably because it’s an easy metaphor for the player exiting his usual world and being plunged in a world of wonders and excitements… (or boredom and badly-designed shenanigans…) We see that again and again in video games like Ultima, Simon the Sorcerer or Monkey Island 2 (albeit in a very twisted and reverse way in the latter…)

So here we are : humble baseball player Brad is now trapped into a dungeon cell, held upside-down by manacles. It’s time to try my shot at this game, and we’ll see for ourselves if the strange interface, the dialogue-free world and the weird puzzles add up to something interesting or if I’m about to experiment a long nightmare in the lands of Enchantia…

Posted by Ilmari Jauhiainen at 05:15