I ended my previous post with a list of puzzles I intended to solve. It goes without saying that I eventually had to rely on the clue sheet to solve at least some of them. I did manage to make one discovery completely by myself. You see, I had found way back in the beginning a pan, but only a short while ago I got the idea that maybe it wasn’t a frying pan, but a pan for finding gold. I went to the only river in the map and discovered a gold nugget. Another treasure to go!
Swamp thing

I probably should have got this by myself, but only when reading the clue sheet I found out that the wallet I had discovered could be taken to the police station near the railroad station. As a reward, I got some money.

My next stop was the collection of shops in the eastern Emerald Island. The only thing I had to take into an account was that I had to buy the valuable painting last, because otherwise I wouldn’t have money enough for all the other things I could buy: yummy food, screwdriver and hammer.

I knew instantly where to use the screwdriver - I could open with it a control panel of an elevator in a skyscraper at the modern city. Behind the panel I found a button and some broken wires. With pliers, I could mend the wires and finally use the elevator to rise to the top of the skyscraper. Unfortunately, the top floor had nothing of interest - just an empty office and a storage room full of Plectrum computers (just decoration).

The next thing I tried was to use the hammer to tear a plank from an empty shack. I had suspected I could use the plank for crossing the deadly marsh, and I was right.

The moors weren’t that big, and the only place of interest was a smooth stone outcrop, apparently consisting of a single colossal flint. In a claustrophobic hollow below its base I found a scrap of paper, which sketched a submerged ancient galleon. I knew already from the map in the manual that I would find such off the coast of Emerald Isle, so this was just another hint pointing toward it. In a hollow, at the top of the flint, I found a boulder, which contained a small key. Might this be the key I had been looking for and would it open the locked gates at the capital?

Night at the museum

Well, it wasn’t and it didn’t. And I should have known it from the start, since the key was described as being of no use in a real lock, because it had only a simple metal bar at the business end. But I had an idea where I might use it. Some clocks are winded with keys, so maybe this key would help me with the broken clock tower?

The city key was big, impressive and intricately decorated with a pattern of coiled dragons - and it opened up the locked gate at the central square. I now had a new area to map, but it consisted only of few rooms, arranged as a neat line. At the one end, I found a pond with the letter H floating in it. So now I’ve seen letters L - T - A - W - H. I suspect I am still missing some letters, since I don’t really get what they should be spelling. 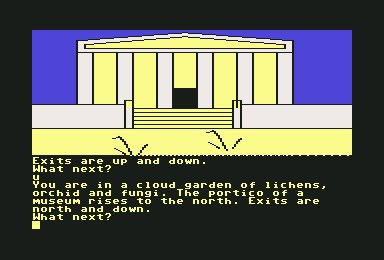 At the other end I discovered a museum. I found nothing in it, but I suspect I am meant to do something more there, since otherwise the locked gate just seems pointless

I still had another locked gate to check, that is, the one at the railroad station. It was also opened by the city key. Behind the gate, I found a substantial wooden bridge leading to another platform, where trains went to the other direction. I also discovered on the new platform a reflective armband I could wear. 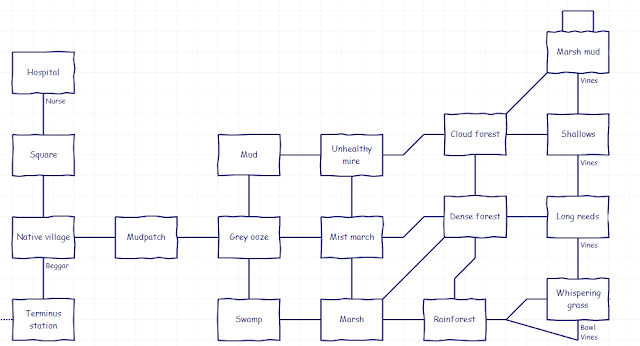 At the other end of the new train line was a native village, complete with huts and a hungry beggar. How is this even possible, when Emerald Isle has otherwise had quite a modern feel? Or is there some sort of apartheid going on and “natives” are kept away from all the conveniences of civilized life? In any case, by giving some food to the beggar, I received an ID card, made of wood.

The native village was next to a jungle, which was bordered by a river full of alligators. There were some vines I should have probably used for swinging myself to the other side, but they were out of my reach. I did manage to find a bowl, which resembled a glass wok. But whatever I did, going to the jungle was fatal, since I caught some disease, which eventually killed me.

The solution to this problem lied in the native village, which had its own cottage hospital (note that this appears to be the only hospital in the whole island). The local nurse told me that health is golden. I took the hint and gave her a gold coin in return for vaccination, protecting me from all diseases.

And this is as far as I’ve got. Looking at the list of unsolved problems from my previous post, I have managed to solve some of them, but some new ones have appeared: