There are CRPG gamers and adventure gamers. And they are searching for different things.

The ethos a CRPG gamer is embodied in the definition of save-scumming, found in the excellent CRPG glossary of Chester Bolingbroke:

Subverting the intended difficulty or challenge of a game by saving and restoring more often than would normally be allowed (i.e., at all in a roguelike) or by saving before every risky decision.

For a CRPG gamer, save-scumming is a form of cheating. As you can note from the definition, it is not just about breaking the intended rules of a single game. It’s also about breaking a more implicit code of honour. Saving before a risky decision defeats the inherent challenge of CRPGs, and only after some radical failure, such as a full-party-death, might the CRPG gamer consider reloading an earlier save. The CRPG gamer is following an exact discipline, which shouldn’t be broken.

The difference between these two characters can be seen easily, when facing a gambling minigame. The CRPG gamer approaches the minigame as a possible new resource of incomes, tries a few rounds and determines the probabilities - and if the probabilities are too good, this is declared a game breaking feature. On the contrary, the adventure gamer approaches the minigame with caution, saving after every successful move, fearing that the next throw of dice might take away all the hardwon money.

These two characters are, of course, just caricatures. We might picture the CRPG gamer as a rough outdoors type, willing to test the limits of endurance and survival skills, living off what the nature provides - and the adventure gamer as an aesthete, covered in the protection of urban civilization, preferring the intricacies of plot details in Bergman and Allen movies over real life. But just like our modern-day Robinson can appreciate the beauty of a setting sun over the desolate woods or the ominous sounds of a thunderstorm, the film buff can follow a peculiar discipline and endure the featureless and dull desert of Dune on the way from the intriguing puzzles of Eraserhead to the intricate enigmas of Mulholland Drive. In other words, even CRPG gamers are interested of tangled plots and breathtaking graphics and even adventure gamers have their own codes of honour, including things like avoidance of clues and walkthroughs (and of course, playing games in a strict order).

Indeed, most of us are sometimes CRPG gamers, sometimes adventure gamers, and it is more the games that determine our playing style. Playing significant portions of a CRPG anew, because of a party death, is often quite challenging and can hold our interest, because the interactions with the monsters and other obstacles can be very different from the first time. On the other hand, playing large part of an adventure game second time in a row, because of forgetting to save in time, is usually just a humdrum feat of pressing the same keys as the last time and challenges only the patience of the player.

Of course, we have hybrids like Quest for Glory that combine characteristics from both genres. And when we go back in time, we find a point, where adventure games weren’t that different from CRPGs. In games like Adventure and Zork, starting the game anew didn’t result in a completely similar gameplay, because random wanderings of NPCs could change things a bit. There were even rudimentary battles and constant war against depleting resources, like lamp batteries. Even the ability to save might have been limited or even non-existent, forcing the player to take risks seriously.

Level 9’s Red Moon is one of those rare adventure games that try to return to that original style of adventuring, which was in some measure closer to CRPG playing. It’s still far from a proper hybrid and wouldn’t pass any CRPG test. Still, it does have battles with monsters, depleting resources (your hitpoints) and limitations to saving, making it a rather peculiar phenomenon in 1985. 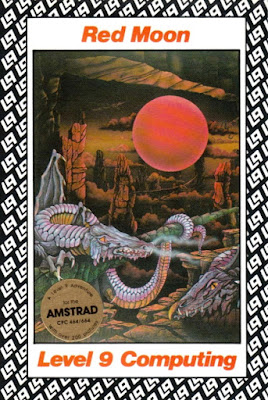 The person behind Red Moon was another newbie, David Williamson, who in addition to this game has designed only its sequel, The Price of Magik. Despite Williamson being a newcomer, the game won the title of the best adventure game of 1985 at the Golden Joystick Awards (I suspect only British titles were taken into account, since no Infocom games from that year were even considered as runner-ups).

The game is set in a world where the redness of the moon, source of all magik (that’s how the game wants to spell it), has been losing its lustre over the centuries. The results were catastrophic.

First to go were the gods, and no one minded that much. You had to watch your language very carefully, I'm told, when they were around, and gods were very insistent indeed about being worshipped properly.

Eventually, all magik started to fail, and the remaining wizards had no other answer, but to build a fake moon, the titular Red Moon Crystal, which could at least illuminate the region of Baskalos. Then someone pinched the Red Moon, and it’s my duty to get it back - and to collect other treasures at the same time.

The only statistics determining the outcome of the battle is hit points, which starts at 50. I’ve found one purple potion that restores the hit points to maximum, but I’ve seen no other method to raise them. Fighting with monsters obviously might result in a loss of hit points. Indeed, a typical fight goes like this. I enter a room, hopefully wielding a weapon (so far, I’ve found a dagger and an axe). The monster attacks and either misses or hits me - if it hits, I lose some hit points. Then I attack the monster and either hit it or miss. This goes on for few rounds, until one of us dies.

Monsters seem to appear only at predetermined spots and they don’t move to other rooms. So, after mapping the place, I could just avoid the room with the rat, since it contained nothing of consequence. Some monsters attack me, as soon as I enter a room, some attack me only, if I attack them. Killing a monster doesn’t provide any loot or experience, so there’s really no reason to go fighting them, unless they prevent movement to some room.

In addition to these simple fighting mechanics, the game has a magic system. I’ll leave most of the details to my next post, but two points must be made. Firstly, casting a spell diminishes hit points. Secondly, saving and loading work as spells. In consequence, there is a clear limit to any saving I can do. I’ll admit at once that although this does give the game a peculiar sense of urgency, I am too much of an adventure gamer to really appreciate this type of resource management. Thus, I will freely use the emulator save states to circumvent this problem.

The game begun, in a grand tradition of Adventure and Zork, above ground, near a house where I was meant to cache my loot.

Other notable locations include: 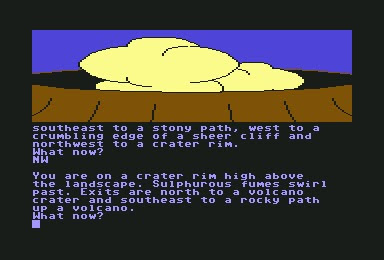 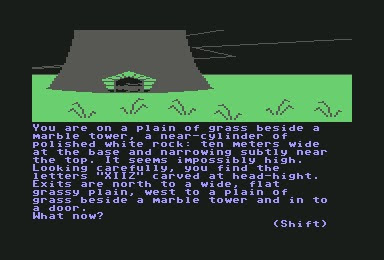 Both the pothole and the castle have led me to cave systems, which I haven’t fully mapped - for all I know, they might be parts of the same system. It’s still a bit early to say whether the game will hold together in the end, but at least the CRPGish elements are an interesting twist.

Games already played on The Adventure Gamer:
Games still to be played:
Compiled trilogies:
Posted by Ilmari Jauhiainen at 23:00