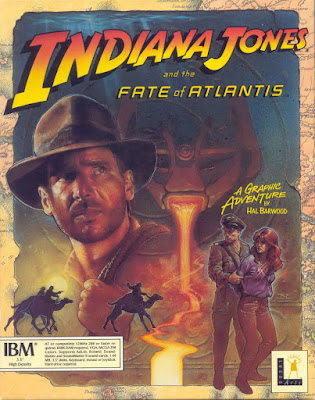 So what is Indiana Jones and the Fate of Atlantis?

Well, let's start from the beginning.

QUESTION: Who is Indiana Jones?


But honestly, if you don't know about Indiana Jones, do yourself a favour and watch Raiders of the Lost Ark. There's a reason it's the answer to the “My favourite movie is...” question in my What's Your Story?

QUESTION: What is the Fate of Atlantis?


Now that the basics are taken care of, let's get into the game.

Indiana Jones and the Fate of Atlantis takes place in 1939, which puts it just after the original movies.
Interesting fact: The second Indiana Jones movie took place a year before the first. I already knew that because I'm a big nerd!

Like many games of this era (or at least the successful ones) this game was released first as a floppy disk version, then a short time later (1993 in this case) as a CD-ROM version with added speech. I'll be playing the speech version largely because it's available and my policy is to, where possible, play the best available PC version of the game from the time. As usual, I will be quickly looking at the floppy version as well for comparison purposes.

This was the first Lucasarts/Lucasfilm game to include voice acting, though unlike future games, this feature was added later by a separate team.

It was also the first Lucasarts game to use rotoscoping technology for animation. Steve Purcell played the part of Indiana Jones.


If anyone mentions Indiana Jones and the Fate of Atlantis, chances are they're talking of this adventure game. But does anyone know (I certainly didn't until I did research for this intro post) that there was also an action game...

But then again, I do have a history with this game...

I was first introduced to Indiana Jones and the Fate of Atlantis when I saw the Lucasarts Archives Vol 1 at a store. I was probably 1995 based on the fact it included a Demo the The Dig. I bought it.


I'd previously played the Amiga version of Indiana Jones and the Last Crusade but I don't even think I was aware of the game's existence until this point. I used to buy Amiga magazines when I had an Amiga, but once I switched to PC I stopped buying magazines and with no access to the internet, the only way I knew about new game releases was seeing their boxes at computer game stores or sections in department stores.

I probably played Fate of Atlantis at some point soon after I bought it. And I LOVED it!

I know I played again in both 2002 and 2010. How do I know that so accurately? In short, I'm insane. The long version is: since the early 2000s I keep a spreadsheet of games I've played – largely so I know what I've played and what I've thought of it – I'd already played enough games at that point that I didn't even know what I'd played or not – I'd be playing something and part way through remember that I'd played it before and didn't like it.


Having played this game before, and having checked the back of the box and the manual, I know that at some point early on this game diverges and gives you three possible paths to complete. The three paths are WITS, where you have to solve harder puzzles, FISTS, where you do lots of fighting, and TEAM, where you and your companion work together to solve many puzzles.

According to the lead designer in an interview with Arcade Attack, the different paths were fellow designer Noah Falstein's idea, and including the alternate paths added an extra 18 months to development time.

I can't remember specifically, but knowing how I think, this is what likely would have happened when it was time for me to choose paths when I played before

So WITS is likely the only way I've finished the game previously.

For the third game in a row, I'll once again be playing all three paths and noting interesting differences. While I have played the WITS path before, I'll be able to see the differences with the TEAM and FISTS paths on this occasion, which is something I'm looking forward to.

The game box makes special mention of Hal Barwood. So who is Hal Barwood and why should I care?

Hal Barwood had previously worked as a screenwriter on feature films, including Steven Spielburg's first feature, The Sugarland Express and performed an uncredited rewrite of Close Encounters of the Third Kind.

When he decided to move from feature films into video games he was brought in by Lucasfilm Games to write a game based on a rejected fourth Indiana Jones movie script written by Chris Columbus.

Hal Barwood and Noah Falstein worked together for the first time on this game, and would once again team up in Mr. Barwood's most recent game, the 2009 adventure game Mata Hari.

He currently isn't working on games and is writing novels.

While there were no adventure game sequels to Fate of Atlantis, there was a planned sequel, Indiana Jones and The Iron Phoenix.

This proposed sequel involved the Philosopher's Stone and resurrecting Hitler! A design document from 1993 can be found here. It's a fascinating document not just for fans of this game but of adventure games in general.

But the game remained stuck in the original design stage, with fears the game wouldn't be able to be sold in Germany, which was their biggest market for Fate of Atlantis, as well as many other adventure games. It did eventually find life in the form of a 4-part comic book from Dark Horse.

A sequel-of-sorts to the game was eventually made in the form of a 1999 action game, Indiana Jones and the Infernal Machine. The game plays much like a Tomb Raider game, but seeing as Lara Croft can be considered a female Indiana Jones, I don't know if you could blame this game for copying the other.

Infernal Machine was also written/designed by Hal Barwood, and featured another adventure with Sophia Hapgood, Indy's companion in Fate of Atlantis.

Infernal Machine had Indy played by the same voice actor as Fate of Atlantis, Doug Lee, and involved the Tower of Babel and King Solomon's Mines, as well as allowing us to revisit the Peruvian location of the first scene from Raiders of the Lost Ark.

So what PISSED rating will this game get? For reference, here's the ratings for other Lucasarts games.
Lucasarts games have consistently scored highly here, which doesn't surprise me at all - I always found their games to be of high quality, including this one.

For my personal opinion of the game, I also use my insane spreadsheet to rate the games I play out of 10, so I know that in 2010 I gave this game a 7 – this surprised me as I seem to recall this being one of my favourite adventure games. A 7 from me is a solid, 'great' game but not an all time favourite. When I put a rating on my spreadsheet I do make a point of rating games based on 'how much fun I had THIS time' to try to take nostalgia out of the picture - this perhaps could explain my surprise.

So does that suggest I'll give this game a PISSED rating of 70? No - it does mean I'll quite possibly rate the Overall Fun Factor a 7, but that shouldn't affect the PISSED rating at all apart from the subconscious effect of my fun level on my enjoyment of each category.


Well, enough talking about it - the PISSED rating don't lie (unless you're playing a Quest for Glory game – ed) so let's play the game for the next few weeks and find out how it fares.

Will I solve the Fate of Atlantis without needing assistance? Let's look at my past performance...
So get your PISSED score guesses in and any bets on any puzzles you think I'll be stuck on and I'll be back in a week or so with my first gameplay post of Indiana Jones and the Fate of Atlantis!

Note Regarding Spoilers and Companion Assist Points: There's a set of rules regarding spoilers and companion assist points. Please read it here before making any comments that could be considered a spoiler in any way. The short of it is that no CAPs will be given for hints or spoilers given in advance of me requiring one. As this is an introduction post, it's an opportunity for readers to bet 10 CAPs (only if they already have them) that I won't be able to solve a puzzle without putting in an official Request for Assistance: remember to use ROT13 for betting. If you get it right, you will be rewarded with 20 CAPs in return. It's also your chance to predict what the final rating will be for the game. Voters can predict whatever score they want, regardless of whether someone else has already chosen it. All correct (or nearest) votes will go into a draw.
Posted by TBD at 03:33

Email ThisBlogThis!Share to TwitterShare to FacebookShare to Pinterest
Labels: 1992, Indiana Jones and the Fate of Atlantis, Introduction, TBD