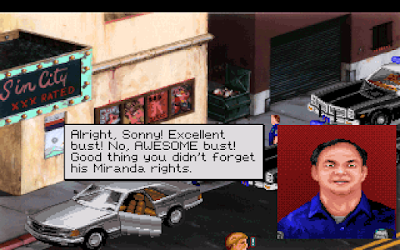 Make the bust and make it stick! That’s the goal, right? I mean, it even says that on the box to this game:


So did Sonny bust someone? Did he make it stick? Ah, for that, you will have to read on. Because first, Sonny was off to The Blue Room for a shindig in honor of his buddy Jack Cobb.

(The suspense is killing you, I know. That’s all part of the trick.) 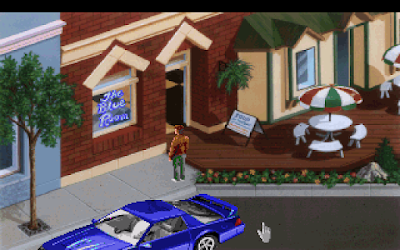 The Blue Room turns out to be a nice eating and drinking establishment founded by former Lytton PD officer Bobby Gomez. I stand outside to admire the environs, clicking around and enjoying the detail that makers of these old games put into nearly every object and description.


Jack is sitting inside. Sonny notes that Officer Cobb has seemed depressed and distracted lately. It could be just the burdens of the job, or it could be something more. 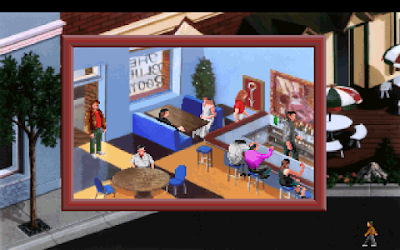 The chat a bit, as friends are wont to do, with Sonny slowly coaxing info out of Jack until Jack drops the bombshell: his daughter is on drugs! 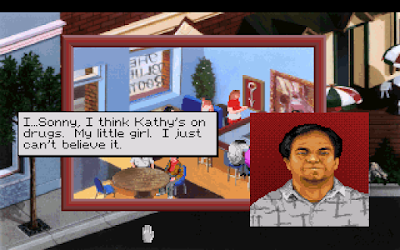 The narrative takes a serious turn here, and I actually start to feel for this digital man. It’s bad enough to realize your child is an addict—imagine being tasked with putting drug-runners away, only to find that the poison you fight has infected your own home.

I wonder if this, too, is a real-life experience that Jim Walls or the other officers he culled stories from in order to craft Police Quest had faced. What do you say Jim. Jim? 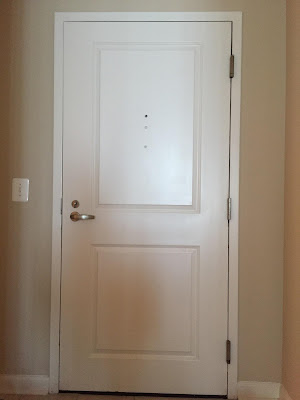 
This is important, though, because it shows that being a cop isn’t all glamour and donuts, something the game tries to impress upon the player. Miami Vice this is not. It’s a tough life. And whatever issues are surrounding American police departments these days, it’s important to remember that most of them are good people trying to do their best to keep the rest of us safe and sometimes they need help, too. They are human, after all.

Sonny, realizing that he, too, is bad at expressing himself, tries to work up the right words to say before their colleague Keith—yes, this time it is Keith and not a mistake—brings in some cake and a dancing girl named Kayleigh.


No! Get out of here, Reverend Jim Bakker! I’ve had enough of people named Jim interrupting my reviews. Begone! Get thee behind me!

Anyway, so Keith is a bit of a party animal, and insensitive to Jack’s plight. But how would Keith know? Keith isn’t out of surprises either, dropping a bombshell on Sonny: Seems like Sonny traded shifts with Keith last week, so now Sonny is due at the station in 10 minutes.


You know what that means . . . another shower!


At the briefing, Dooley drops some knowledge on Sonny and the rest of the force regarding the stolen vehicle that may have been repainted and used in the murder of Lonny West earlier in the day. A missing persons report had been filed by the wife of a man named Jose Martinez. Martinez, who has priors for selling narcotics, had been seen getting into this car two days ago and has not been heard from since. And the owner of said car, Malcom Washington, is hot on Dooley to get his vehicle back.

Can you say “foreshadowing”? I’ll bet you can! And apparently, so can the game. So time to hit the streets!

But first, Sonny indulges in a little daydreaming:


Okay, now it’s time to hit the streets, and this time I do remember to give my vehicle an inspection. Jim Walls would be proud . . . wherever he is. 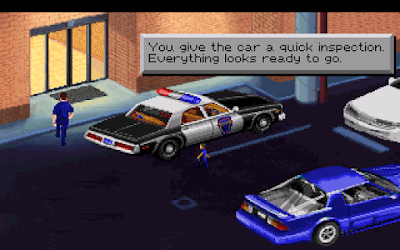 Uh-oh! Dispatch has something for me! It’s— 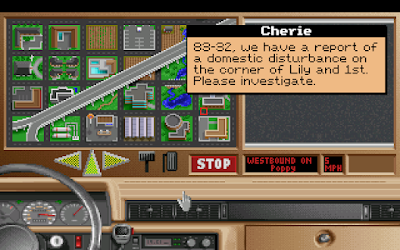 —not the stolen Mercedes.

I do not recall a domestic disturbance in the original game. Is this something new added for the remake! Excited, I boogie my way to Lily and 1st, but before I get there . . . 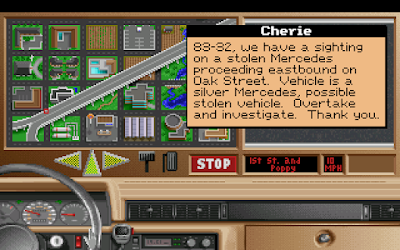 So I’m curious. I know the Mercedes takes precedence, but what if there’s something I missed regarding the previous call?

I restore, but am unable to get there before the second call comes in. And even if I go to where the domestic disturbance is located, nothing happens.

I’m of two minds about this. On the one hand, it’s a red herring added just to give a little more flavor to the narrative and the world of being a cop. Obviously, someone will get there to resolve the domestic issue. Also, it’s just a game and no one is really being harmed.

But on the other, it would have been cool for some more stuff to have been added to this remake.

Anyway, Sonny flips on his flashers and pulls over the stolen car. Excitement mounts! Tension builds! Proper police procedures must be followed!


This smells like a felony, which doesn’t smell good. According to the manual, here’s what Sonny has to do:

I already got the suspect’s vehicle to a complete stop (step 4), so I’m already doing things out of order, but I think that’s a minor concern at this point. The important thing is that I clearly have good reason to believe that a felony has been committed. I also click “Eye” on the car prior to calling dispatch.

It’s the vehicle alright. More importantly, backup is on its way. Getting out before they arrive results in a pretty grim game over.


When backup arrives in the form of good ol’ Jack Cobb, I have Sonny get out, draw his gun, and command the driver to get out, stop, and lie down, all courtesy of the “Talk” command.

I emphasized drawing Sonny’s gun, because the first time I did not click the “gun” icon on the perp, and this happened: 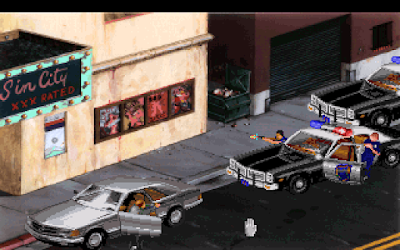 With the gun drawn, things took a different turn.

Anyway, I get this goon into Sonny’s car and remember to click “Talk” on him as he sits in the back to read him his Miranda rights. The perp is verbally abusive and generally uncooperative, but I don’t want him to walk on a technicality.


So there’s this stolen car sitting there. Unlike at the Lonny West crash/murder scene, I am able to search this vehicle. Clicking “Eye” on the interior of the car brings up a view of the frame. 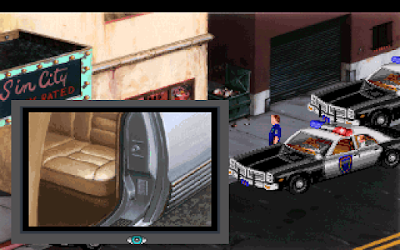 As most of us know, this is where VIN—Vehicle Identification Numbers—are located. If this wasn’t important, the game wouldn’t have given us this view. Clicking “eye” reveals that the VIN has been covered with black paint. The “hand” icon lets Sonny scratch the paint away, prompting me to worry about how long he’s been letting his nails get. More importantly, the hidden VIN matches that of the stolen vehicle described at the first briefing at the beginning of the game.

I want to open the trunk, but it’s locked. Oh well. There’s still more stuff to search in the car, and the game is letting me, so why not take a seat and look in the glove box? A friendly click of the “hand” icon on the Mercedes’ seat brings us this screen: 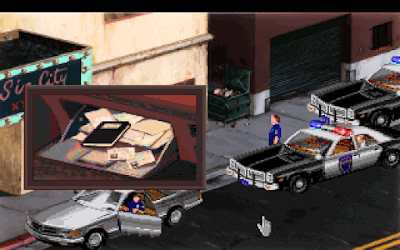 Searching—which the lawyer in me has to point out that Sonny has more than probable cause to do so without a warrant—turns up the following:

Hmm . . . I seem to remember “Sweet Cheeks” Marie telling Sonny about a “customer” of hers named Hoffman who claimed to be the Death Angel. Could this be him?

Maybe, maybe not . . . but the drugs in his trunk sure bespeak of a less-than-savory career.


That’s all there is to do here, so Sonny cart’s Hoffman or Pierson’s ass to the lock-up and books him for everything he can . . . in this case, I get him for “Possession of a controlled substance,” “stolen vehicle,” and “evading arrest,” and “possession of a concealed weapon.” Oddly, the code for “possession of cocaine” doesn’t work.

Sonny’s prisoner is heated, claiming that he’ll be out in “15 minutes” and vowing to come after Sonny when he is. Jack then arrives, telling Sonny the evidence has been booked and that he’s wanted in Dooley’s office on the double . . . but seems to be smiling about something. 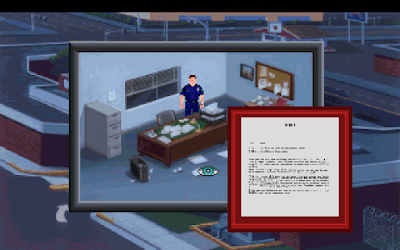 Well, what do you know?! Sonny’s transfer went through! Dooley, reading the memo, is angry that Sonny is gone and the fact that some joker—The Gremlin, perhaps?—had put mace on the memo.

But the important thing is that Sonny is on temporary detail to the Narcotics division, to work with Lt. Morgan and his crew! On to bigger and better things!

I know what you’re wondering though: Did the bust stick? Did it? All I can tell you is: stay tuned!

Inventory: Loaded gun, handcuffs, nightstick, keys to Sonny’s Camaro, key to the patrol car, pen, ticket book
Score: I honestly can’t remember what it was out of 225
On a scale of Don Knots to Don Johnson, how much do I feel like a cop?: Lenny Briscoe