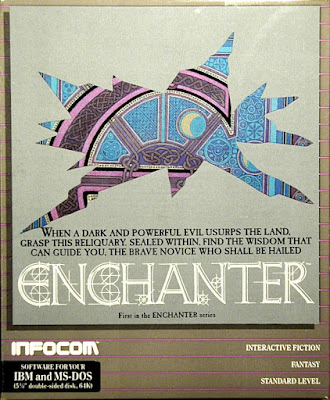 It seems like forever since we played Zork III, but we are finally returning to the unambiguous portion of our Great Zork Marathon with Enchanter, the first game in the second trilogy. It seems a waste for Infocom not to have taken advantage of the well-established brand name, but I am sure the marketing team had their reasons for not wanting to do so. Zork IV: The Enchanter would have been a fantastic title! I enjoyed the Zorkisms that we found in Starcross and Planetfall, but it feels good to be back on the main road. Like many of the games in this series, I vaguely remember starting this game (or one of its sequels) more than twenty years ago. I know that it has a magician protagonist and that finding and casting spells will be a key component. I also know that at some point in this series you “meet” your player character from the first Zork trilogy, but it might not be this game. I look forward to finding out!

This game both starts and ends an era for Infocom. This is the final game jointly designed by the team of Marc Blank and Dave Lebling. Marc remained at Infocom until 1986 but did not have time to develop any other games; he would return to produce Battlefield and Journey in 1988 and 1989. Dave will write four more games but we aren’t quite done with him yet. We will be looking at his Spellbreaker, the third game in this trilogy, in a few months. (Steve Meretzky of Planetfall-fame will be given the helm of the second game, Sorcerer.) Enough introduction, let’s play!


I know that I have frustrated some of you with my draconian approach to Zork manuals, refusing to read them if they weren’t shipped with the original game. Many of you fell in love with those manuals when you played Zork for the first time so it is entirely understandable. I had said on a post or comment earlier that Enchanter was the game that broke this streak, but this was entirely wrong. Other games at this point in our story (Suspended and Planetfall) had their final documentation at launch, but it really won’t be until after Sorcerer that we reach the end of this strangeness. This time I feel reasonably confident thanks to my discovery of Paul David Doherty’s “Infocom Fact Sheet” which gives the skinny on what documents went with which version of the game. I will hold off discussing all of the manual additions until after Sorcerer; I am trying to track down when the “grey box” releases of Zork came out so I can take about the additions in the right place in the timeline.

Enchanter is perhaps the strangest case of revised documentation because this “folio edition” came with some amazing documentation in the so-called “Guild Directory”. It not only features some fantastic textual layouts and art, it also provides in-universe explanations for the various commands you need to run while text-adventuring. There a sheet on the “Thaumaturgic Guild” which explains how spell-casting works while the “Guild of Cartographers” describes how to move around. The “Orator’s Guild” explains the Infocom parser and there are several others including the Scriveners, Physicians, and Fletchers, all with fun ways to describe playing the game. It’s so charming! If you haven’t seen this original documentation, you can check it out on the Zork Library site.


The most surprising thing about the folio documentation is what it doesn’t include: any reference to the Great Underground Empire. There is not a single trace of Zork in this document. (The replacement, a “Brief History of Magic”, will directly tie the game into Zork history.) I am not sure exactly what is going on here but I am going to keep digging; perhaps there will be clues in the game itself. I could almost buy that Enchanter was intended to be standalone but then why have it be done by the Zork masterminds? There may be some more clues in the game itself.

Like too many Infocom games to date, you cannot successfully play without a thorough reading of the manual. In this case, we have to learn first about the universe’s magic system, a near-direct copy of the system from Dungeons & Dragons: you, a magic user, carry around a spellbook that contains all the spells that you know. But you cannot read spells out of the book. No! You have to memorize the spells first to cast them later. This means juggling a limited number of spell slots and having to deal with things like re-learning spells in the morning. We can also find scrolls which we can be used to cast a spell once or we can copy them into our book. (We’re also told that some spells are too complex to be copied.) This is all very different from the wand-based magic of Zork II, but it seems easy enough to understand.

The plot seems simple enough: a long time ago, there was a prophecy that a Warlock would come and try to take over the world. He would be defeated by an enchanter “promising in magic” but without a full set of skills. The young spellcaster would be beneath the Warlock’s notice; only when he or she gets within striking distance will the Warlock realize the danger he is in. The introduction text when you start the game reveals that the Warlock’s name is Krill. Scrappy novices always manage to win in those sorts of stories and I am looking forward to it!


The game opens with my character being teleported by the Circle of Enchanters to a location not too far from the Warlock’s lair. I suppose that just teleporting me next to him wouldn’t have been a good idea. We’re at the east end of a long road near a mountain. Just for giggles, I try running away, following the road west. I see a sign with just the word, “Why”. I head west again and this time the sign says “are”. Sensing a clue or at least a joke, I continue west to get the whole message: “Why are you going west when the castle is east?” That’s funny! I only went west because I wanted to see what the signs said! Curiously, if you keep going west the next two signs say “Burma Shave” which I am sure some of you understood immediately but I had to Google for it: in the US before World War II, Burma Shave was a company that advertised their product using rhyming billboards arranged down the highway just like this. I suspect it’s quite funny if you understood the reference, but I did not. The signs further west than that are blank so I return to the start to begin the game for real.

I explore further to find a long circular track around the mountain to the east. I take it clockwise and discover a small shack containing essential adventuring equipment: a brass lantern, a jug, and a loaf of bread. While the lantern looks typically Zorkish, it’s broken and doesn’t turn on. Is it a gag item? Or will I find a way to repair it later? The elvish sword is missing but since I am a spellcaster instead of a fighter, that makes some sense. While exploring, I get a message that the sun is starting to rise. Just like Planetfall, this game seems to have an internal clock. The bread and jug are portentous-- will I need to eat and drink as well? Further around the mountain I find a stream where I can fill the jug followed by a chained and locked gate leading to the castle. I make a note of it and will come back in a bit.


The southern side of the mountain features an abandoned village as well as the path up to the top. An old crone just outside the village gives me a scroll for the “rezrov” spell to open doors. That looks convenient! I have to type “gnusto rezrov” to copy it into my spellbook and that must be the strangest useful sentence ever typed into an adventure game. (The “gnusto” spell is the one you use to copy spells.) I make up all the way up the mountain to find absolutely nothing except a view of the castle: it has three towers, two large ones and a smaller one that is giving off some sort of magical fog. I suspect I’ll learn more about those later. While I was exploring, I was also prompted that I was hungry and thirsty and I satisfied both easily with my bread and water. It’s not gourmet, but it will do! Unfortunately, that pretty much confirms that Planetfall’s annoying subsistence mechanic made it into this game too. I blame Steve Meretzky.


With the whole mountain explored, it’s time to head to the locked castle gate. It’s pretty clear that I have to use the “rezrov” spell that the crone gave me, but I take stock anyway to see if any of the others might be of use:

I did not see any animals that I could talk to in my explorations so far but “frotz” might be useful until I get the lantern fixed. I cast “rezrov” on the door and the chains open. Time to explore the castle.


The castle is large and, as you will find out in a second, I didn’t get to explore all of it and much of what I explored was in a rush. Just north of the entrance, I found a dark area and so I cast “frotz” on the lantern. Since it’s broken, making it glow by magic seemed a fairly poetic thing to do. Unfortunately, from there I started to get a message that I was tired. What should I do? I try sleeping and all that wins me is a nocturnal visit by someone that steals my spell book. My remaining exploration was hurried as I tried to find a place to sleep:

Just south of there, I meet my doom: some strange cultists capture me and send me to a prison cell. I try to escape, but a few turns later they escort me to a sacrificial altar where I get to re-enact my grisly death from Zork III. I’m dead and I think that’s enough for one week.


Thus far, I am enjoying the experience. The random discovery of scrolls that are exactly the ones you need for puzzles seems strange, but we’ll see how the rest of the game handles this. I’m not quite far enough in to get a feel for the whole effect. Next week, I’ll try find a way to sleep so I can go chat with those frogs outside. After that, the rest of the castle awaits!