Missed Classic: Dungeon - And Another Thing… (Plus Final Rating)

Last week, I completed the adventure game marathon that is the original Zork. Of all the games that I have played here, this is the one that I feel proudest for winning. I have wanted to play and beat this game for years; thank you for giving me the opportunity to share it with you. I will get to the final rating shortly, but if you have been reading the comments then you know I have one remaining piece of unfinished business: the alternate versions.

Throughout my coverage, I have been aware that Voltgloss and others have been playing a different version of the game than I am. I was attracted by the “Dungeon” version because it was the one that I discovered for Linux many years ago and, as far as I knew, it was the only one. In this, I have betrayed my age because an alternate version of Zork has been available since 2004. I have a better idea now how these variants fit together and just won the other major contender for the “definitive” version. None of this affects the score so if you want to get right to that part, just scroll down.


For the last several weeks, I have been blogging the 585-point version known as Dungeon. I discussed the history briefly in the introduction, but it started as a fork of the original Zork codebase, freed by a hacker and ported to work on a wider array of systems than originally intended. From the early 1980s through 2004, this was the definitive version of mainframe Zork and the only version that could be played outside a small community of MIT-flavored PDP-10 users. This game claims to be derived from the “final” version of Zork and includes all puzzles created through 1979, but I have since learned that several refinements were made later and missed being included.

Mainframe Zork continued to have some development until 1981 when a new “final” edition was produced. This edition grew to 616 points and featured several additional treasures and puzzles. I do not know how widely distributed this version was; I have found documentation from 1982 that suggests the 585-point version was in wider circulation. The source code for this version was leaked sometime before the early 2000s (possibly in 1996), but it was unplayable, a historical curiosity only. It was written in a dead programming language called MDL (also known as “Muddle”) and could not be built on modern systems. Two later advances would finally bring this version back to a playable state.

In 2004, Ethan Dicks and others took that MDL source code and ported it to Inform, an adventure game creation language. In spirit, this was much like the original anonymous hacker that ported the 585-point version to other systems. This would become a 646-point version, but as far as I can discern it only changes the point values from the 616-point version rather than adding anything new. This version used the Inform parser and so while all the game elements were the same, a few solutions were worded slightly differently. It’s the easiest way to play something very close to the original game.

The final chapter in this story was finished in 2009. In that year, Matthew T. Russotto released “Confusion”, a Muddle interpreter written in C and C++ that knew “just enough” syntax that it could play the original MDL sources (616 points) with only a few modifications. It has its own bugs, but this version is the only one that utilizes the original game parser. You can get Confusion prebuilt for Windows, but I had to jump through a few hoops to get it to compile for the Mac. As I closed out my look at Dungeon, I played this version to conclusion so that I could get as much of the original experience as possible.

All of the above does not answer the most basic question: which version of Zork is definitive? Is it the 1979 version that predates the founding of Infocom? Or does the 1981 version best represent the authors’ intent? Does it matter that the later version may have been played by fewer people? I can’t answer that for myself, let alone for you. Instead, let me summarize the handful of differences that I discovered and you can decide for yourself.

I did not solve the 616-point version of the game without help. Playing both versions side-by-side is maddening because new exits and changed descriptions do not stand out in descriptions you’ve read dozens of times before. I may have a similar challenge playing Zork I later. I tried to play the new puzzles straight but did not always succeed without help. These are the differences that I found:

The largest addition is the three-part “palantir” puzzle, colored crystal balls that revealed distant parts of the maze. Each ball, when found, hinted at the location of the next.


Other Puzzles and Changes
This version feels more polished overall. The parser accepted complex commands like “drop everything except torch” and had the proper use of pronouns. A handful of text changes made puzzles like the clockwork canary and the sliding blocks much easier to understand. In contrast, additions like the “Sooty Room” and “free brochure” puzzles set the game backwards in solvability. In the end, it’s a wash. My feelings on the game are unchanged. I appreciate why some fans love and swear by each of the two versions.

Puzzles and Solvability - Most of Dungeon boils down to “just” a treasure hunt, but experienced through a set of some of the most diverse puzzles in adventure gaming. We had not only traditional mazes and fetch quests, but also a sliding puzzle, a “Simon Says” puzzle, and many others. The endgame itself is like a masterclass in puzzle design and unlike anything I have played before. Although some of the puzzles were hard, only a few were “unfair’-- the glass bauble being the worst offender-- and I always felt like there were new things for me to try nearly until the end. Well done. My Score: 7.

Interface and Inventory - I had to play the MDL version to appreciate the original engine but what I found was fantastic. The text input was intelligent and dynamic; it would be excellent for 2010s let alone the early 1980s. The fact that it was implemented in a LISP-esque language certainly helped. Suspect received a 6 for nearly the same interface. That is a bit too high for me on a text-only parser, but this is an excellent text-only parser. My Score: 5.


Story and Setting - There is little story to speak of in Dungeon, just an unnamed protagonist delving into the ruins of an ancient civilization. Players are rewarded with hints here and there of a deeper backstory with the Twelve Flatheads and the decline of a brutally inefficient empire. It’s nonsensical and fun but not particularly deep. Although the setting as a whole makes nearly no sense, individual areas are exceptionally well done, especially the volcano and Flood Control Dam #3. My Score: 4.

Sound and Graphics - You might expect a zero here because we are playing a text adventure, but the ASCII art for several of the objects as well as the basic representation of the sliding puzzle maze give it enough of a fraction of a point that I need to round up. My Score: 1.

Environment and Atmosphere - I had a lot of fun playing the game. The designers kept it whimsical and rarely did the game go into darker territory than it should have. My biggest complaint is that the layout of the dungeon makes absolutely no narrative sense. Why have a bank below the white house? Why have a cyclops in the center of the maze? Why have a well that doesn’t lead anywhere but more puzzles? The designers tried to take an Adventure-like maze and pretended that it made sense for something closer to archaeology. My Score: 3.

Dialog and Acting - The prose in this game is well-written and I was never bored or misunderstood what the game was trying to say. My Score: 4. 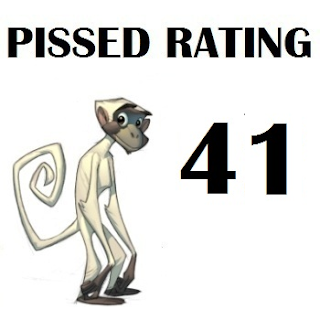 While not astronomical, that places Dungeon above the other text adventures that we have played and it scores well against early graphical adventures. That feels right. A lot of what made Infocom great can be found in this game. It rewarded the time that I spent with it, but I can see someone with less dedication having a worse experience.

You guys did an amazing job guessing the score on this one. Average guess was 40.3. Niklas and Ilmari will split the reward for guessing 40 and 42 respectively. Congratulations! CAP distribution will be included in the Star Trek final rating which will land either this week or next.

This was the first step in a very long marathon, but it just got longer: based on some prompting from Voltgloss, I will add Starcross to the playlist. He was a great help with hints and if he says that has some elements that tie into Zork, I’ll play it and see. I also learned of Mini-Zork, a stripped-down 1987 variant of Zork I for systems that could not play the full thing. As of right now that is not on the list, but I might be convinced if someone feels strongly about it.

The next marathon post will be Zork I, but I’ve already won and will cover it in one go. Essentially, when Infocom was founded they created a version of Dungeon with fewer puzzles (such that could fit on a contemporary home computer) and launched it as Zork I. Please comment here with your score guesses since there won’t be an opportunity later.
Posted by Ilmari Jauhiainen at 23:00