This game is without a doubt one of the hardest I've discovered to research since beginning this blog. I'm strangely willing to hop in 'head first', so to speak – but that would make for quite a short introductory post. What I've garnered, however, does not fill me up with confidence. Eternam is a title by Infogrames Europe SA, a group probably best known for making largely Amiga action titles in the earlier days of its existence along with some licensed titles. There have been a few unfortunate incidents with them already on this blog, I fear. We're soon to encounter what could well be its best known game in Alone in the Dark later on in the year – a game which just about literally created the 'survival horror' genre. What some of you who follow Chet's blog might know this group for first is Drakkhen, a title so incomprehensible that it was almost impossible to follow... 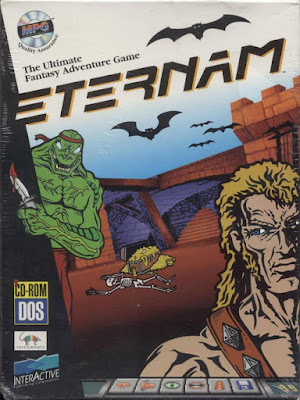 … which is the game that this one is supposedly a self-aware 'parody' of. Even with Chester's logical, clever writing, I struggled to follow Drakkhen when he played it. I do not feel encouraged by the thought of a game which might well make even less sense. Still, it does have some unique features. One of the most obvious changes to a typical adventure game is that this title takes place primarily through a first person perspective. As a parody of Drakkhen, it maintains the 3D, 360 degree motion (on a horizontal axis anyhow) that the game it parodies uses, with some third person intervals throughout apparently. It also entirely takes place using the keyboard – no mouse whatsoever. 'T' for take, 'U' for use, 'S' for speak, 'L' for look, 'I' for inventory and 'D' for options, along with space bar for 'fire' in the 3D first person sections. I cannot change this selection. Yes, this is as terrible as it sounds in practice, methinks.

So, the issues are mounting and I haven't even gotten to what really has me fearful – Infogrames is French. French people do thousands of things well. Their breads, cheeses and wines are legendary. Their military has had international recognition for years upon years through their Foreign Legion, and their culture is truly astounding. Adventure games they do not do well. In fact, the most painful games I can think of to visit this website have almost universally been French. What's that I hear you say? But that's unfair profiling? The game was published first by Infogrames – but for the later CD-ROM port in 1993, Capstone Software (which is a group that some of you may have heard of, and most of you who have will fear) took charge of publishing it, which gives me an idea of the 'quality' I'm due to expect. The game also has a somewhat prohibitive copy protection scheme which involves using an included package which I'm simply not able to find. The first version I found of the game had an included crack, but I've had one game runup result in a black screen, the 'introduction' doesn't load and I wasn't sure if I had actually encountered the true 'entry' to the game as of first writing this – since, I found a new copy which works far easier and allows the 'introduction' screen to come aboard. Hooray! I'll get to that in my first play post though.

The one positive I will definitely give to this game is that it is ambitious. The few screenshots that I have found in attempting to search up information about this game (extremely scarce apart from a few Let's Play-styled videos which I don't really want to look at for obvious reasons) do show off something that is at least fairly visually appealing, and I'm not really too worried about the game not looking or sounding good. For all that I expect the game to be utterly crazy and borderline nonsensical, I doubt the game will fail in making a spectacle of itself as it does so. French games look great, even if they're largely insane.

It's fair to say that this is not a game that seeks to invite potential players. Starting it up literally drops you straight into the middle of a field (well, after the copy protection prompt). There is a short message that confirms you are DON JOHNSON.

Er.. rather. 'Don Jonz' is going to the 'biggest and best planetary funpark in the entire galaxy', Eternam. Turns out that it is being attacked by the archenemy of 'Don Jonz', 'Mikhal Nuke' (Mickey to his friends). He's a Space Marshal, you see, and he's heading to the Island of Revolution as part of his holidays. There's at least one person on his side – Tracy, a technician on the Eternam coordination team. She's the first person we see on the screen – or rather, the only person. Everyone else throughout the game seems to be drawn in a style reminiscent of King's Quest 7, I.M. Meen and all of the other games Animation Magic had a hand in. This is definitely a compliment, particularly for 1992! Will she actually help? I have no earthly clue, as I can't really look into this and the manual is incomprehensible even translated from Spanish (I don't believe this is a translation issue and rather just the way the original manual was written). Vive le France, right? 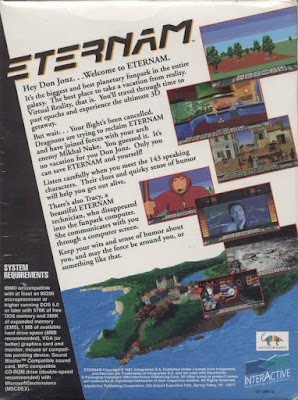 Example Bet for 20 CAPs (with 20 immediately going to Laukku because I forgot to award them last time around):