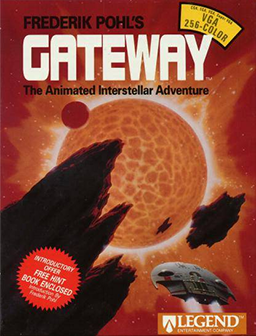 Frederik Pohl's Gateway, our next game from Legend Entertainment, is naturally based on the 1977 book of the same name and author, the first installment of the Heechee saga. Trickster covered the book last year on his short-lived Retrosmack blog, so I won't go into much detail about that here. Besides, while the game takes its setting from the book, the plot diverges quite a lot, and even the PC is somewhat different despite being supposedly the same person as the book's protagonist. The book seems to be much more character-driven, but the game focuses more on the setting and plot. You don't need to know anything about the book to play the game, because it's quite a rich setting, capable of supporting a lot of different stories. Apparently Syfy is going to adapt the book into some kind of TV show, too.
I should start out by admitting that the Gateway sequel, Gateway II: Homeworld, was one of my favorite games when I was a kid, being one of the several science fiction games that I actually owned (along with Alien Legacy and Outpost). But I didn't play the first game until much later, when the rise of abandonware made many games much more available. That was still several years ago now, so while I will be playing with a lot of familiarity of the setting and puzzle solutions, I don't remember all the details. I am very excited to be sharing one of my favorite game series with you all, but I will do my best to temper my excitement with a fair treatment of the game's features.

The game opens with an illustrated background sequence summarizing the setting. Explorers on Venus have found tunnels carved by the alien Heechee half a million years ago. Nobody found much of anything interesting until one explorer stumbled across a working spacecraft. He unwisely just got in it and started fiddling around.

Eventually he managed to trigger it to take off and use its FTL drive to take him to an huge space station that had been sitting between the orbits of Mercury and Venus. Unfortunately, the station didn't seem to have any food or water, and he couldn't get the ship to take him back to Venus. So before he expired, he rigged his ship to explode in order to send a signal to Earth.

The station was the biggest discovery ever, after the knowledge of alien artifacts at all, of course, because it contained hundreds more spacecraft just like the one that had taken the explorer there. Those FTL spacecraft became humanity's gateway to the stars, hence the name.

The catch? Their destinations couldn't be deciphered. Their only control was a four-digit code. It became a sort of lottery to take a ship to an unknown destination, an interstellar prospecting venture. Most locations yielded little or nothing, and a few explorers never returned, but a small fraction found useful technology that could be worth a fortune.

The PC is supposed to be the same as the protagonist in the book, but he's not even named in the game as far as I can tell. Which is probably just as well, because the guy's name is Robinette Broadhead. Seriously, who would give that kind of name to a boy? It's not too surprising he has psychological issues.

The scenario is given in the game this way:

"You won the local lottery on December 23, 2101. The prize was a one way ticket to Gateway worth $238,575, including a limited partnership in Gateway Enterprises, transportation to Gateway, ten days worth of life support on Gateway itself, a class in Heechee ship handling, and an invitation to go on the first available mission after graduation.

"A week after you turned in your winning lottery ticket, you boarded an interplanetary ship traveling from Earth to Gateway.

"It is now Wednesday, May 17, 2102, and you have been aboard Gateway for less than a day. You have been assigned living quarters and a proctor to show you around and get you settled in. Your first ship handling class starts later today.

"You are about to become a Gateway prospector."

The manual has some additional information. It puts the gamble rather bluntly: "You will be put aboard a Heechee starship and will take your life in your hands as you punch out for a destination that could be the core of a star, a deadly black hole, or a new planet filled with the riches of ancient Heechee technology." It also suggests that the Earth is getting rather depleted, an idea which I think is mostly ignored in the game: "The prize was a one way ticket to Gateway, a passport out of the food mines in the blasted moonscape of Wyoming, and a chance to become rich beyond your wildest dreams." Food mines? What does that even mean?

With that, we start "Part 1: Gateway Prospector".

Gateway has almost exactly the same hybrid text interface as Legend's previous games, Timequest and the Spellcasting games, so I'm not going to say much more about that besides mentioning again that I will generally play in half-screen mode, hiding the menus and leaving more room for text. But there are also a number of graphical interface screens that do not use the parser, shifting the needle on the hybrid text adventure scale a bit farther toward graphical adventure. Most of these graphical interfaces involve pushing buttons on various technological devices, and given the sci-fi setting, there are a lot of devices.

Gateway is available on the Internet Archive. Legend released it for free at one point to promote the sequel, so if you haven't played it, I'd encourage you to give it a try. Already the graphics look a lot better than Timequest, and having Bates and Meretzky involved is a good indication that the puzzles will be good too. Next time, we'll dive into exploring an alien space station and taking the gamble of a lifetime!