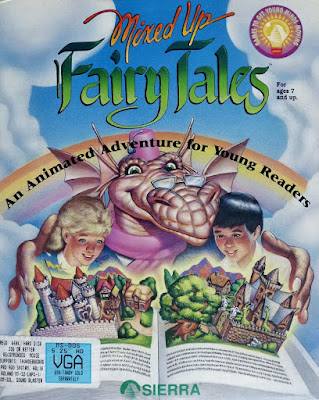 Mixed Up Fairy Tales is a Sierra game, so it's as good a place as any for us to start 1992 as any! That said, it's definitely not the game that most would associate with 1992. In fact, I'd not actually realised that I was signing up for Mixed Up Fairy Tales, a Lori Ann Cole designed venture programmed by (what I affectionately think of as) our own Corey Cole, but had rather expected it to be Mixed Up Mother Goose. Bizarrely, Mixed Up Mother Goose never actually hit The Adventure Gamer in spite of being almost Accepted and was really the initial reason Trickster introduced the term 'borderline'. At the time, Zenic, Canageek and Ilmari were all pretty dubious and Zenic even went so far as to suggest that 'when one of Trickster's kids grow up, they can play Mixed Up Mother Goose and give it a simple thumbs up or thumbs down'. We're now into the land beyond Trickster, where Mixed Up Mother Goose could have just as easily have been played by an infant and reviewed summarily. Fortunately, I happen to have one handy – my daughter is now 9 months old! We all know kids are growing up faster these days with tablets and smart phones, so it's clear she's more or less ready. (I'll possibly do the writeup, and the actual use of the mouse, and the play decisions, but she will hold executive veto of blabbing and loud noises.)


There's something to be said of the thought that this game really isn't a standard 'adventure title'. The goal is pre-set out in the manual very clearly, with a short page of it devoted to the 'parents' giving an idea of what they're likely to have to be helping their children out with – which I suppose is a nice touch if the player had some rather tech-unsavvy parents. As I had already played Space Quest 1 by the age of 5, I think this game was never truly directed at me.. which is fine. I take no umbrage to playing a game that didn't really have me in mind when it was created. The manual continues by introducing Bookwyrm, a character designed purely for the game to introduce the young players to the stories that will be lampooned and altered. The basic premise of the 'Mixed Up' titles is a simple one – take a well known fairytale and make one tiny alteration which 'ruins' the fairytale/nursery rhyme, leaving it to the player to 'fix' them, e.g. providing the Itsy Bitsy Spider a water spout to crawl up and fall off of to his doom, or giving Humpty Dumpty a wall to brutally crack his head open on. (Olden time tales are kinda brutal like that.) I quite enjoy the way the opening page of the manual actually directly 'speaks' to the player, saying how 'you dream of' et al – it's a nice bit of immersion, particularly for the younger audience they're aiming at.

I must admit that I was quite enthusiastic as I opened up the manual, finding five fully written stories (albeit rather abridged versions to my mind) of the five tales that are actually being explored in this game. These are (in no particular order) Bremen Town Musicians, Cinderella, Jack and the Beanstalk, Beauty and the Beast and Snow White. They're minimally illustrated, but the fact that they actually printed up five whole stories over the space of the manual could well have made this almost a worthwhile purchase for the parent of a youth in and of itself. I'd not actually heard the 'Bremen Town Musicians' tale (four old animals near the end of their lives scare a bunch of robbers in their quest to become musicians) before, but the rest were essentially ones I could have made up off of the top of my head. I made sure to read all five of them as they were in the manual to my little one, so that she'd know what was going on. The ones that have been explored by Disney were very much based off of their origins, however, so no talking candlesticks and the like. So, there's a simple premise and I know what I'm getting in for – what else could a kid's game have going for it?

… COLOURING BOOKS! The box for this game must have been utterly gigantic, containing a 'how to get the game running' insert manual, a story manual, a colouring book and a game – they really packed as much as they possibly could in here, and I am nothing less than impressed. The game itself has a few fun quirks that the back cover explores and as such I do want to cover – the game was designed for 'classroom play', so it was really something they had thought could be played in short bursts. This is the second game that we've explored with this mechanic, though the previous one is notably less an adventure. Randomised gameplay is something that you couldn't normally place into an adventure game, but I can already imagine how this might work – Jack having a slipper where Cinderella has a magic bean, for instance. I'm hopeful that there's a few cutscenes or the like to keep things interesting – because no matter how well put together and beautiful this game might be, I definitely think it's at the risk of feeling a little wooden if all it comes down to is a game of a few quick pixel hunts and zipping by. If the game goes without any real dialogue due to the randomised elements, I'm certainly not expecting this game to do extremely well under the PISSED rating – but there again, the game is designed by people who can make a game about a kooky doctor with a magical island not only work, but spawn multiple sequels – so if anyone can do it, I expect that a game with Lori Cole's name and visage on the back of the box is capable of delivering. Also worth note is that this is one of the few adventure titles I can think of, particularly in this era, where you're not playing a predetermined character – you choose one of six avatars and a name (this is a part of the 'classroom' design methinks, but I still think it's a nice touch if implemented well – as I say, the dialogue could make or break this title for me, and definitely would have done for me as a kid. King's Quest 6 was remembered fondly for its clever play with characters and mythology – King's Quest 5 was remembered for an annoying owl, and those games are essentially the 'next step up' from this to the kids it is designed for in my opinion – if you guys think I'm being a little harsh, just let me know. Otherwise? On to International Space Year! 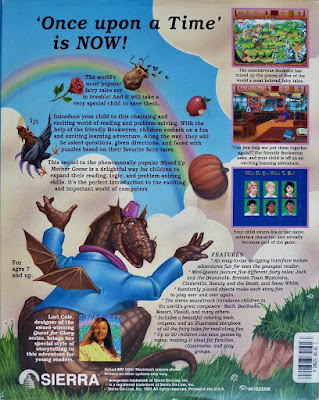 Note Regarding Spoilers and Companion Assist Points: There's a set of rules regarding spoilers and companion assist points. Please read it here before making any comments that could be considered a spoiler in any way. The short of it is that no CAPs will be given for hints or spoilers given in advance of me requiring one. As this is an introduction post, it's an opportunity for readers to bet 10 CAPs (only if they already have them) that I won't be able to solve a puzzle without putting in an official Request for Assistance: remember to use ROT13 for betting. If you get it right, you will be rewarded with 50 CAPs in return. It's also your chance to predict what the final rating will be for the game. Voters can predict whatever score they want, regardless of whether someone else has already chosen it. All correct (or nearest) votes will go into a draw. I'd recommend not betting on this game due to its 'random' nature – puzzles will literally be different between playthroughs.