Elvira II - Let me in

Dirk Gentley Journal Entry #1: "The night was cold like the mackerel that was served on the plane. Just another week on the job. A tough negotiation with some Wall Street wackos and a new ampliation for the study later I was back in California to reach another kind of agreement with the mistress. Ah, Elvira. The lingering smell of Elvira still emanated from the ruby necklace and the book she had left one week before in my car. A reminder of the nights we had spent rocking the desolated bars of the nearby town. A reminder of why I have stopped chasing unfaithful husbands and other low grade scum to start a career in The Business. The only business worth its capital letters: The Show Business. And a reminder of why I was freezing my ass in this cold night waiting for Elvira outside the Black Widow Studios."

We start Elvira II just outside the Black Widow Studios with a choice, the career of the protagonist. I chose being a detective, as it is not only quite cool (and I grew up watching Remington Steele and Moonlighting) but it is also the most balanced character with a 8 or 9 in all 8 attributes. For reference, in Elvira I there were just 5 attributes, hence this game should be at least twice the RPG the first one was. Pure maths!! The strength and weapon skill attribute maintain their meaning. That is, strength indicates how hard you hit and your carrying capacity while weapon skill improves how lethal you are with your weapon. The only difference is that in this game weapon skill is not dependent on your weapon and does not improve with its use. In summary, I am screwed.

Constitution is one of the new attributes introduced, although it is a substitute for life. The main difference is that the character now has individual hit points for each arm, leg, torso and head instead of a simple health pool. This means that there are even more ways to die in combat beyond simply getting to zero health. Getting to zero in torso or head also means dead and can come way quicker than getting to 0 total hit points. Zero in any arm makes you hit slower and softer and zero in a leg makes movement a chore as you have to wait a few seconds after taking a step or turning.

Intelligence is the magic attribute, but I will explain it in later posts as well as accuracy, which affects combat. The remaining attributes are will power, which determines the character guts (my best bet is that it affects what is dropped onto the floor when you are gutted); magic resistance and poison resistance, which are both self-explanatory. And with all of that out of the way, it is time to start our quest to save Elvira. Again.

The first thing of notice is that the interface has been greatly revamped. Long are the days of having different verbs. Well, at least they are gone from view, because whenever you select an object in your inventory the possible actions are shown in the rectangles on the right of the screen, just over the Disk icon. The left of the screen shows the new hit point system and the rest of the screen is mostly the same but for a few elements that we are going to avoid for now.

Boy, I still have shivers thinking about the time I spent looking for the last key in Elvira I. I would like to say that Elvira II is better in the pixel hunting department but… well, take a look for yourself:

This is probably the most flagrant case of pixel hunting in the game but as you can see, it is going to be very bad. In any case, if we approach the studio gate we realise it is closed and we have no means of opening it. Approaching the security booth yields the same result, but we can throw the rock at the window and open the door.


The game has a pseudo built-in help system. If you take too long without getting the rock, Elvira appears to scold you and flat out tell you how to solve this particular problem. Given than you can barely see the rock, I am sure this screen was seen a lot. Elvira keeps appearing in other locations through the game giving more subtle hints, although it is not very reliable when solving some of the most obscure puzzles.


The interior of the security booth doesn’t makes me feel very secure. There is blood all over the walls, especially next to a door with bullet holes. I notice a security jacket and cap on the wall and I quickly start playing fashion Elvira. I don’t know if it has any effect on reducing damage, the game simply doesn’t tell you, but if I am gonna die, I wanna die in style.


There is a board on the wall with a lot of papers in which seems to be a lost opportunity for having fun with the text, as they simply are labeled as postals and a calendar. Oh, well, everyone's a critic. As they are not stuck to the wall, they are soon in my pocket. It is not the same as guybrush taking a dog but it is obvious this guy’s pocket are bottomless.


Opening the bloodied door reveals what I swear is a dead scene from the first game. Reusability is a main concern in software development, mind you. We have found the security guard. At least it is not trying to kill us. I mean, I am obviously worried about the welfare of this co-worker but come on, better him than us.


Apparently the corpse came from the inside of a black hole because there is absolutely nothing in the closet. Searching the body now lying on the floor we can get a security key from him.


This key can be used on the nearby security console to open the main gate. After carefully consulting the anti-copy wheel of course. Filthy pirates…


The last thing we can do here is watch the security monitor which shows us images from the interior of the studios. Specifically of studio 3, which something tells me may be important as there are two cameras just pointing at the doors. Another lost opportunity for humor or even horror. 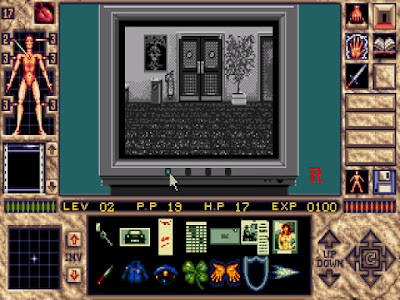 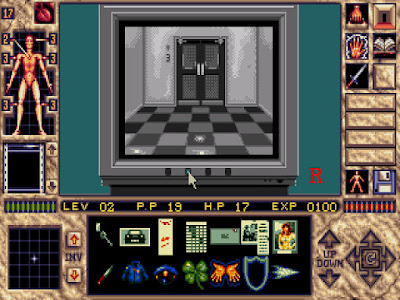 Now that the gates are open we can finally enter Black Widow studios. Or its parking lot. There is only one car here: Elvira’s. This just shows that nobody expected to stay alive for long, as nobody besides Elvira though to bring their own means of transportation to these studios in the middle of nowhere, nothing county. Neither did we, and we are expecting to die a lot, thus proving my point. We can open Elvira’s trunk… her CAR’s trunk, I mean… to find some wire cutters and a wrench.

There is nothing else to do outside the studios for now and so we finish this first gameplay post without having died a single time. We are doing way better than in Elvira I.


MAP OF THE OUTSIDE OF THE STUDIOS:

MAP OF THE SECURITY BOOTH (it is bigger on the inside):