Missed Classic: It Came From the Desert - WON! and Final Rating

Doctor Greg Bradley Journal Entry #3: Thankfully, the last four days were just a dream. The town's last stand won't take place on June 15, 1951, as it's now June 11, and I've just helped a town defend itself against the giant ants. It was hard work, and some great people lost their lives, but we finally did it. With help from the townsfolk, I found the ant's nest, entered it, and planted some dynamite. The ants won't be bothering anyone anymore. Now I'm going back home to write about the experience so people will know of the bravery of Lizard Breath's citizens.


When we last left, I'd lost and the ants were well on their way to dominating the Earth. Backtracking a bit, a lot of things happened differently in future playthroughs. Notably, I WAS able to convince the mayor that the ants were real. I must have missed a piece of evidence in that playthrough. Interestingly, I was able to convince him on Day 5 by the end. Knowing where to find the evidence from previous successes and mistakes makes the game a lot easier.

Most importantly, I was able to enter the ant's nest. The evidence was consistently pointing to the M-1 mine and the nearby Southwest Volcano. My preferred method of transport was via plane from Hilber's Field. After landing and getting out of the plane (without crashing, which is a an effort in itself as all those shrubs and medium sized rocks will crash the plane if I hit them.), I run to the south of the mine where I found this rock arrow.

And a little further to the southeast, I finally found what I was looking for - the ant's nest...

Finding the nest was one thing. Getting in is really, really hard. If I go there on the wrong day, the ants will exit the nest but it will close way too quickly for me to get in after killing him. Finally the weather was right on day 11 and I was able to enter the ant's nest.


I didn't have to traverse both levels of the nest maze to escape. The ticking kept getting quicker, indicating the limited time I'd have to escape. When I took the exit back to the first level I heard an explosion and got this screen. 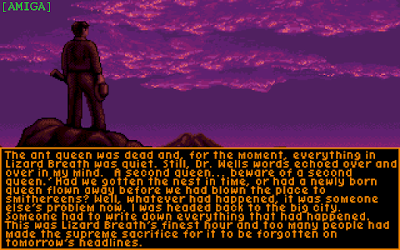 Before we get to the final rating, I'd like to expand on the non-linearity of the game using Jackie as an example.

I've mentioned how things in this game happen whether I'm there to see them or not and how refreshing that is in games from this period. A good example of this is Jackie. Here's some different scenarios that play out when I make different decisions during the game.

I discussed the bulk of the game in the previous post, and in that game I met Jackie fairly late in the piece. I happened upon her asking to be rescued from her insane father at the Neptune Club (a club who aim to help the ants take over the world.)

In a different game I found her early on (Day 3 I think) when a disheveled Jackie knocked on my door and told me about her car wreck.


I was given the choice to go with her, call the cops, calm her down or sleep. Being the heroic type, I checked out the wreckage and fought another ant (getting a tissue sample in the process - not terribly helpful as I already had a tissue sample from J.D.'s farm from the first day) then offered to let her stay at my place. This pissed Dusty off much earlier than in my last post.

When I returned home later that day, Jackie offered to thank me properly for letting her stay.


Seeing as Dusty would hate me anyway, this time I accepted Jackie's offer. Doing so unfortunately hampered my ant investigation skills.


Having Jackie at home gives me useful information. She tells me when people have called or visited, giving me hints on where to find clues in the process. She also asked me to drop her off at Neptune Hall once, and when we got there I found out that Crazy Billy Bob was her dad!

Later in the week (June 7th) Biff and I got worried when she was missing.

Two days later, Jackie told me she was going back to Los Angeles (I thought the only way out of town was blocked?) and suggested we have 'one for the road'. I didn't seem to have any urgent business to attend to at the time, so why not...


A few hours later I was speaking to Biff, and mentioned something my old M.I.T. professor once told me.

"Greg, just remember two things and you'll be a happy man:
1)  They are only rocks, after all, and
2) The crazy broads make the best love."

That seemed like a weird thing for a professor to tell one of his students but I'm glad I'm continuing the tradition by weirding out my own student with the same advice.

In a different playthrough, I never let her stay at my place at all. I refused her request after helping her with the car wreck, and she asked me to drop her off at Neptune Hall instead.


I decided to visit Neptune Hall a few days later and it was good to see that she was fitting in fine and nothing was amiss...


So, that's Jackie. I really find this a good example of non-linearity adding to the gameplay. Some games get it wrong by locking you out of quests or important information when you aren't in the right place at the right time - this game gives you the important information another way, and just has your own experiences change by seeing and doing different things without locking you out of content, and yet increases replayability and a sense of accomplishment by showing that your actions do affect the people around you.

So, enough of this (hopefully interesting) case study, time for the final rating...

There are no real puzzles in this game. The only thing that can vaguely be called a puzzle would be working out how to defeat the ants - getting the four pieces of evidence and talking to people to work out where the evidence is, the location of the ant's nest and what to do when we get there. Very low score for this rating for this reason only because it isn't really an adventure game

No inventory to speak of. When you collect the evidence the game knows you have it but you can't check (apart from going to the University to see if you have the option to give evidence to Dr Wells) The interface is simple and clear. The map screen has a cursor and looks like it SHOULD contain mouse movement but I can't really punish a game made in 1989 for not using mouse input.

The story is great fun. It's a simple premise and really feels like a story out of a 50s monster movie. As does the setting of the small town in the middle of nowhere in 1950s USA. The mayor refusing to listen to the evidence, the town being blocked off from the outside world, the one person doing what he can to single-handedly save the world - all cliches and all deliberately included to make the game work as an homage to the movies of old.

There's no doubt the Amiga version from 1989 really went all out in sound and graphics. You can tell the game was made for that system and the PC port suffered as a result. But still, even the PC version adequately shows the details of the town of Lizard Breath and its surrounds and, if it had to be compared with 1989 PC games would have come out very favourably. As it is for a 1990/1991 game it is above average but nowhere near the top games. The sound is also good. Most locations have unique and appropriate music - the main wandering themes are atmospheric and add to the game as you play. The minigame sound and music are appropriate, from the creepy ant sounds in the shooting scenes, to the frantic action music in the hospital escape sequence. The 1989 Amiga original wins out on both sound and graphics for the extra detail and quality, especially when compared to its original release year.

This is by far the game's best feature. Cinemaware's entire mission statement is to make you feel like you're in a movie and this game does it brilliantly. I've mentioned some of this during the playthrough and in the 'Story and Setting' section but to really understand how well it does you have to have seen the old monster movies it's mimicking and have played the game. It seems appropriate for this game to receive the first 9 we've given in this category.

The non-linearity that I detailed in this post really helps give the dialogue more believability and impact.

The only reason it doesn't rate higher is that there are limited options to say different things. Dialogue options are often binary "Listen further" or " Tell them I'm not interested" type choices.

The Amiga version gets an extra point for the 'acting' which is mostly in the opening cutscene but also the way a nurse will call out during the hospital escape scene or the scream you make when an ant gets you. Though a few lines don't qualify as a whole point, I was very close to giving the PC version a 7 anyway so it's really more of a 6.4/6.6 situation.

1+2+6+6+9+6*10/6 equal 50, with the Amiga version getting 57. I'm giving it an extra point because it just does what it does so well, and only fails at categories it wasn't even trying to succeed at in the first place.

So, the final rating is 51, which means the 10 CAPs will go to... Torch, for guessing the highest with 48. Being 2 points higher than the highest guess suggests that perhaps my nostalgia inflated the score slightly. It's possible, but I did try to not let it cloud my judgement. The fact that I really enjoyed playing it again suggests it does still have value, as that isn't the case with all games I loved when I was younger. 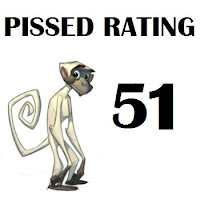 Now, if any of you suddenly feel the urge to play the game, you can find it, its sequel and 11 other Cinemaware games here. Enjoy!
Posted by TBD at 23:00

Email ThisBlogThis!Share to TwitterShare to FacebookShare to Pinterest
Labels: 1991, Final Rating, It Came From The Desert, Missed Classic, TBD