Missed Classic 11: It Came From The Desert - Introduction

Time for a different Missed Classic. This one wasn't missed because it came out too early or didn't quite fit as a PC graphic adventure game. It had the option to be played as part of the blog but failed as nobody was willing to spend their CAPs to take this from Disregarded to Accepted.

And for that, I'm glad. It Came From The Desert is very clearly not an adventure game. It also isn't a game specific to any genre. It contains many action sequences and some strategy sequences all wrapped up in a somewhat adventure game-style exploration and investigation.


It Came From the Desert originally came out in 1989 on the Amiga. It was well received and, while 1986s Defender of the Crown is Cinemaware's most famous and popular game, It Came From the Desert is their most ambitious. It plays, like the company name suggests, like an interactive movie, specifically a 1950s monster movie (likely mostly influenced by THEM!)


A year or two after release a clearly inferior port made it to PC, and that's the version I'll be mainly reviewing here, though I'll be playing both the Amiga original and the PC version and comparing the two. As an example of the differences, here's the opening from both versions.


That Amiga version voice acting really set the mood for me when I originally played the game. "The Desert... unchanged for millions of years" - a great way to bring people into the game. The PC version should have at least had the opening narration as text over the intro, as without it they're losing a big part of the cinematic atmosphere they were going for.

It Came From the Desert was also one of the first games with an expansion pack (not the first, that honour goes to a 1981 expansion to Temple of Apshai.)

There have been other ports of It Came From The Desert, notably a totally different game with the same basic premise and Full Motion Video for the Tubografx CD

There is also, currently, a low-budget movie being made and a planned release of a Sega Megadrive/Genesis version that was shelved 24 years ago.


Enough with the intro, let's get on with the game...

Doctor Greg Bradley Journal entry #1: Talk about timing. While doing geological studies on rocks near the sleepy desert town of Lizard's Breath, a meteorite hit the ground, creating some much more interesting rocks to study. I've hired a local prospector and a high school student to assist me in my research, and possibly found love with the local DJ. Things are going swimmingly – I'm now visiting a local farm and... oh my god, what IS that thing........................

As I start the game, the local prospector, Geez, knocks on my door with some rock samples I've paid him to find. 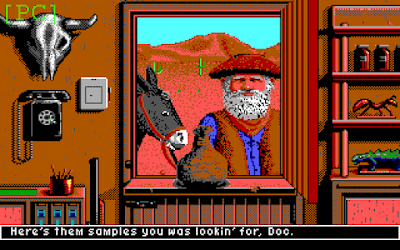 His donkey seems strangely spooked by something, which is the first sign something is not normal. Animals can always sense danger in these situations.

I take the rocks and as Geez leaves, my high school assistant Biff, who both looks and is named nothing like a science student and more like the kind of guy who beats up science students in 1950s fiction, arrives and looks at the rocks, pointing out the red glowing one. 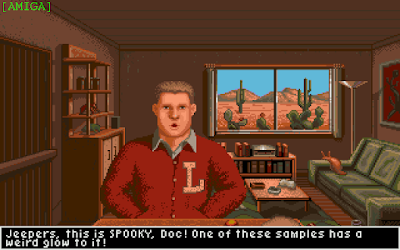 Choosing the stupid option gives you your first action minigame, which I am extremely bad at. I don't know how to do it, but you move the extinguisher around and project water at the fire. I've tried aiming at the bottom and top of the flames but can't seem to get it right.


On failure, I wake up in hospital but I'm going to backtrack because I would NEVER choose the obvious stupid option (and if you say otherwise, Biff, I'm giving you an F!)

I instead ask Biff to sample the glowing one for radiation, then have it sent to the lab (the results will arrive in 2 days) for more testing. I make a mental note to ask Geez where the samples came from and remind myself that he's likely to be at O'Riordan's Bar. I then call Dusty at KBUG radio. She tells me that she'll be at O'Riordan's at 6pm after she gets off work and has some really crazy story to tell me.

We get to the map screen, which shows us the time with the minutes constantly ticking forward, making the urgency of the situation clear. One thing that surprises me: this game was originally made for the Amiga and the Amiga has a mouse as its primary input yet the map only uses joystick (or keyboard arrow key) input to move the cursor. The map seems perfectly designed for mouse control but amazingly doesn't use it.


I go to O'Riordan's to meet Geez, but it doesn't open 'till 10am. It's almost 10, so I just go across the road to talk to Elmer at his gas station. He mentions that the local teenage gang have been terrorizing the roads around town and I should be careful. He also tells me about a strange happening in J.D.'s farm where a cow was found with its head cut off. I'm getting clues all over the place but it's now 10:02 so I visit O'Riordan's to see if Geez is there. He is. After buying Geez a drink to refresh his memory, he tells me that he found the glowing red rock just to the southeast of the old Quarry. Another clue.

I visit JD's farm next and a farmhand tells me part of the story about the headless cow before freezing and staring over my shoulder. He hightails it out of there just before I turn around and... 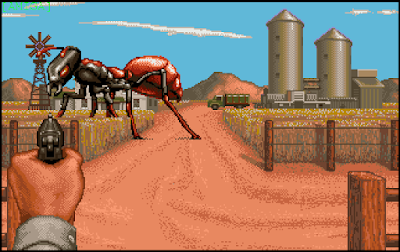 After killing the ant (I shot both of its antennae, which I knew would work because I've played the game before) you get treated to a new action sequence 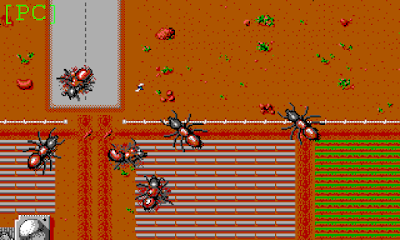 I was given a new action sequence, a top-down ant fight scene. This time my bullets seem more like grenades in that they have a specific distance before they explode (the distance being about 2 giant ant-lengths. I killed a few ants, but ran out of bullets and got cornered. An ant got me.

I woke up in hospital and was told that I would have to spend 2 days recuperating. Bugger that, I thought. I'm escaping this joint.

This was always one of my favourite action sequences. You can hide under bed covers and nab a wheelchair for extra speed while doctors, orderlies and nurses try to stop you and sedate you so you can't escape proper treatment (does this really ever happen? I thought if I didn't want to be treated I could just leave hospital at any time - but not in Lizard Breath – healthcare here isn't a privilege or a right, it's a requirement!) 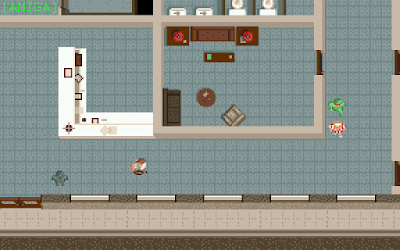 In the Amiga version when the medical staff notice you they scream things like "That's him", "That's the guy" or "Get him." Even rudimentary voice acting at the time was rare, so this really added to the urgency of the minigame.

Unfortunately, I didn't escape and was strapped to a hospital bed for 2 days. A good time to end the first post I think.

Note that this game plays differently to most. I have the option to not answer the door when Geez knocks, and can just leave, sleep or make a call. I can go wherever I want and people will go on living their lives without my interference. This really adds to the immersion of the game. It makes me feel like it's a real town with real people instead of a game where everyone stands in one spot waiting for me to show up and ask them a question.

So, get your PISSED rating score guesses in and join me for a while in the lazy town of Lizard Breath.


Note Regarding Spoilers and Companion Assist Points: There's a set of rules regarding spoilers and companion assist points. You can read it here but it doesn't really apply very well for this game. As this is an introduction post, it's an opportunity for readers to bet 10 CAPs (only if they already have them) that I won't be able to solve a puzzle without putting in an official Request for Assistance: remember to use ROT13 for betting. Probably no point in betting I'll fail a puzzle too, but they're your CAPs - do with them what you will. If you get it right, you will be rewarded with 50 CAPs in return. It's also your chance to predict what the final rating will be for the game. Voters can predict whatever score they want, regardless of whether someone else has already chosen it. All correct (or nearest) votes will go into a draw.
Posted by TBD at 23:00

Email ThisBlogThis!Share to TwitterShare to FacebookShare to Pinterest
Labels: 1991, Introduction, It Came From The Desert, Missed Classic, TBD