As Patti leaves Baltimore behind and settles in for her long limo ride up to Philadelphia, the scene returns to Larry, dreaming about riding a gondola with Patti through the streets of Venice. Of course, we know that his reverie doesn’t end well. This time, the gondola springs a leak, and Larry makes a rather uncomfortable discovery upon awakening . . . 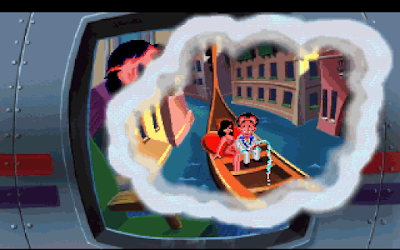 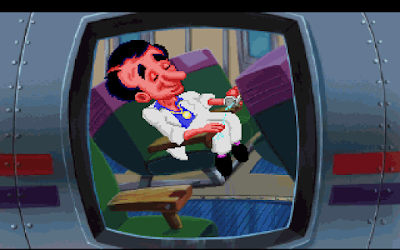 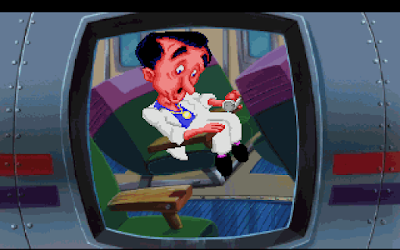 Ah well. Apparently polyester is quick-drying, because Larry steps out into the terminal none the worse for the wear. 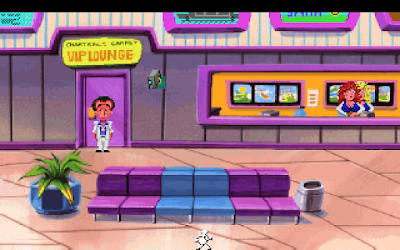 Having done a fair amount of traveling myself, I have to say that this recurring gag of all airports looking the same works. It really captures the tedium of air travel. Luckily, I haven’t yet been to an airport where I’ve been required to enter a strange five-digit code from a separate document I may or may not have a copy of in order to get my boarding pass.

So just like the other airports in the game, I click around on the signs until I find the one advertising a limo service (1 point). 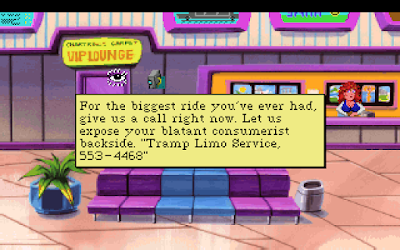 Great! Now I need a quarter to use the payphones in the east end of the terminal. Luckily, this being Atlantic City, there are slot machines in the terminal’s west end. Obviously.

The only one Larry can do anything with is the machine second from the left. Someone left a quarter in there, and pulling the arm, Larry spins one cherry, rewarding him with a single quarter (5 points). How convenient!

Calling the Limo service nets Larry another 3 points. Larry mistakenly thinks he’s speaking to the actual Mr. Tramp himself. I guess he really wanted to ask him his thoughts about illegal immigration and female journalists. Luckily, all Larry gets here is a limo. Showing his driver—this time Bobbi Bahng—the matchbook from the Tramp Hotel, he is soon on his way towards a date with destiny. Or tackiness.

Impressed by what he sees, Larry is eager to explore his surroundings. He can go into the hotel and casino, or walk along the boardwalk. But first, let’s talk to these two characters standing by the door.

The one on the left is Cheri, who welcomes Larry to the hotel and asks him to indulge her in a little guessing game. The rules are simple: Enter any number below 10,000. I put in “1,” and it turns out I was right! 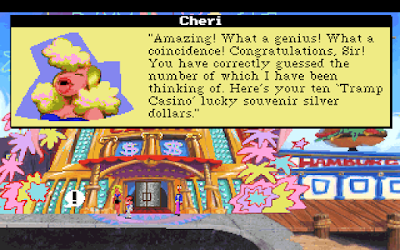 She rewards Larry with 10 silver dollar tokens (2 points), which she is sure to warn Larry are not real money and only work at the casino. Further guessing never results in any more money, unless Larry loses all of his cash in the casino.

The guy on the right, Brewster, is more of a concierge. He offers to call a limo for Larry. There’s no need for that now, but clicking the zipper on him gives Larry a little more personal information about the friendly doorman.

Before checking out the casino, I decide to walk along the boardwalk. I remember this from a playthrough years ago: It goes on endlessly, populated by rollerskating passersby. The only place of note is Ivana Skates!, a skateshop run by the Donald’s first ex-wife. All of the other shops are closed because it’s the Donald’s birthday. 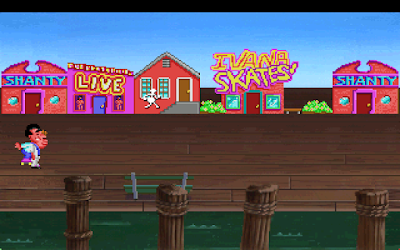 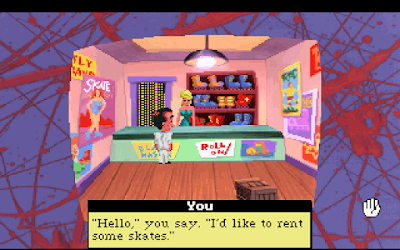 Larry is interested in renting skates, as according to Lana’s file, she can be often found on the boardwalk. Unfortunately, Lana wants a deposit of $250.00. Larry informs her that he has no money, but Ivana responds that she is willing to accept tokens from the hotel. Since I only have $10.00 worth, it’s time to partake in that classic Sierra adventure game pastime, gambling!

Entering the casino, Larry is impressed with its stylish and tasteful décor. 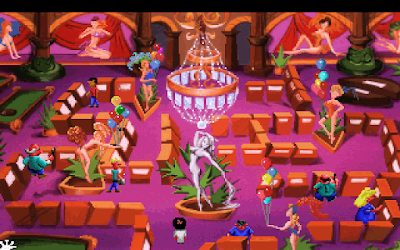 More importantly, there are rows and rows of video poker machines. There is a blackjack table in the upper-right portion of the screen, but Larry seems to have bad memories of that particular game.

Poker it is! Larry sticks his coins into the machine (4 points) and starts gambling. It’s pretty standard video poker, with no fancy rules or wild cards or the like. I spend an inordinate amount of time playing, building up a stash of $2,000.00 or so in casino coins, because you never know when fake cash will come in handy.

In fact, heading to the ballroom in the back, I find an immediate use for my hard-won dough. 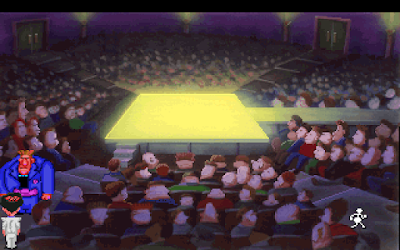 Larry notices that the ballroom is full of only men. Talking to the bouncer, he learns this is because a wet t-shirt contest is about to start, and he can take a seat for only $25.00 in order to see someone named Jennifer Jiggle strut her stuff. Since there is no pass in an ashtray to help me get by the bouncer in this game, I fork over the coins and take a seat.

Jennifer does indeed come out and strut her stuff. Larry can click the “Eye” icon on her for 8 points and a close-up that’s supposed to be sexy, I guess?

Okay. That was kind of pointless. The show over, an announcement then states that the next event at the classy Tramp casino is some good old-fashioned mud-wrestling. What a cultural mecca! Not much to do then but head back to the skateshop and rent some rollerblades.

Back with Ivana, I have a flashback: I remember during the first time I played this game being able to trade an inventory item for a skate rental. I first save and pay Ivana in coins (4 points), but then restore and decide to go through my inventory and see what works. Turns out the first item was the key: Larry can leave his camera as a deposit (8 points) and pick it up when he returns the skates. This is an alternate solution that works a bit better than the one at the Hard Disk Café in New York, where Larry can just keep clicking talk on the maître ‘d if he doesn’t feel like paying him.

So now Larry has rollerskates. He can sit on one of the benches that’s on every screen to put them on (3 points). Now it’s time to search for Lana.

The first time I did this, I spotted her gliding down the boardwalk and off-screen; it doesn’t look it from the screenshot, but trust me: she quickly turned tail and fled.

I tried to catch up with her and click “Talk,” but to no avail: This is one of those Sierra point-and-click games where clicking the icon isn’t enough; your character has to sidle up next to their intended target in order for the interaction to occur. So since Lana is faster than Larry, even with the game speed turned all the way up, he was never able to catch her. She soon left him in the dust, and like a dope I skated along dozens of boardwalk screens before I stopped and restored to before wearing the skates.

This time, when I spotted Lana, she kept coming towards Larry. Talking to her worked (6 points): Larry got her attention, and they sat down on a bench to have a chat.

All Larry can do is click “Talk” and learn that she’s getting ready for the mudwrestling competition. She asks Larry to come by and see if he can take her in the ring. Larry says okay (2 points) because like he has a choice, returns his skates and gets his camera back (3 points) and goes to the ballroom.

This time, the bouncer tells Larry he can take a seat for $25.00 or agree to participate for $500.00. Not being a cheapskate, I pay to participate (12 points), but quickly turn my camera on before heading down the stairs. Lana comes out, strips into a bathing suit, and begins taunting Larry.

Larry, excited about the prospect of grappling with a beautiful half-naked woman despite the likely beating he’ll receive, jumps into the ring and prepares for the worst. 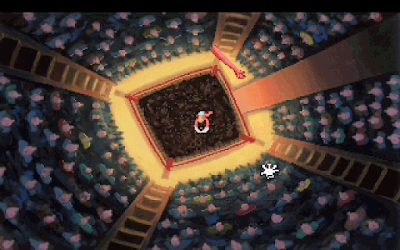 What we get is a mini-game from a bird’s-eye view of the ring. Various body parts of Lana’s flash on screen—leg, arm, face, breasts, you get the idea—and Larry has to click “Hand” on them as they appear. Each time he does, the audience applauds and Lana lets out a pleasurable moan, which is kind of funny, because the game, and the series as a whole, constantly reminds us that Larry is such a loser and has no luck with women, but they sure seem to enjoy him well enough.

In any event, this being Larry 5, you eventually move on to the next sequence (40 points): Larry and Lana get so worked up, they start stripping down in front of the packed house and proceed to get down to business. 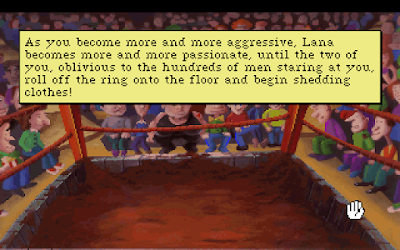 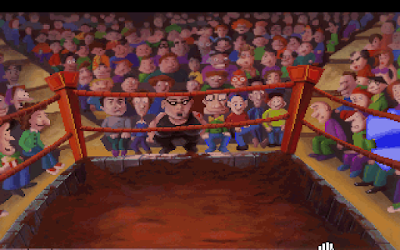 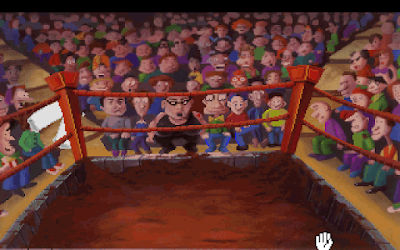 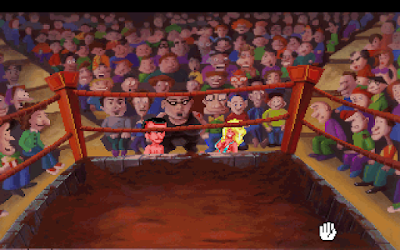 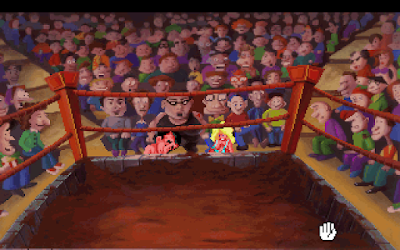 Except not really, because Larry seems to be having a little bit of performance anxiety. 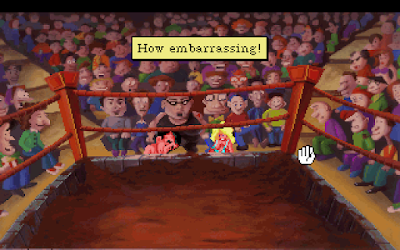 He whines that he’s never done it before 900 or so people, and then laments that the boys back in Hollywood won’t appreciate his weak performance when they review the tape (20 points, because I had the camera on). What I want to know is: how will they see anything, since the camera is disguised as a pocket protector which is affixed to the pocket on Larry’s shirt he flung to a far corner of the stage? 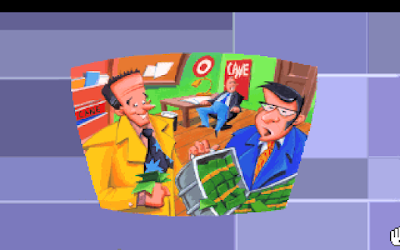 Back to Larry: He gets his boarding pass for Miami (4 points) and settles in for the flight, daydreaming about Patti rocking out with a keytar in front of the Taj Mahal.

Lost in the dream, the game shifts to Patti in Philadelphia, standing outside of the K-RAP radio station, ready to continue her vital mission in service of God and country. 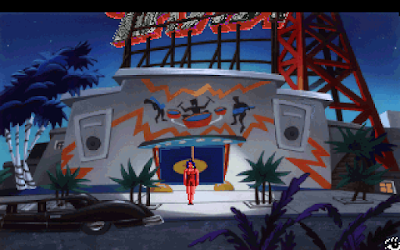 All told, this session felt much more game-like and didn’t have nearly the hand-holding that the New York City and Baltimore sections did. Still not very challenging, but more enjoyable. Next time, let’s see if Philly provides the same experience.