Before picking up where we left off, I need to address the quiz I complained about last post. In a comment, Aperama reminded me that pressing CTRL+ALT+X bypasses the quiz and gets right to the game. So thanks, Aperama! Bonus CAPs coming your way.

Larry decides to head into the “majestic” looking casino looming up in front of him. Walking through the sliding doors, he sees a bunch of people enjoying various gambling machines. There is a hallway in the back. To the left are slot machines, and blackjack machines to the right.

I click the “hand” icon on a blackjack machine, and Larry puts his remaining $16.00 into it and starts his gambling night. I figure I’ll start with blackjack, since the odds are a bit better than a slot machine.


On the machine, there are buttons for each main blackjack function. Clicking “Odds” gives the odds, as well as a rudimentary rundown of the rules of blackjack. Interestingly, there are surrender and double options, which I don’t recall being in the original.

Speaking of the original, I don’t know why, but the fact that Larry plays with a real dealer in it adds a little more to the immersion factor, as much as an old-school EGA game can be realistic. It’s a little thing, but it has an effect, even though Larry doesn’t see her as he plays.

After a short time and only about ten reloads, I win a few hands and increase my bets in $30.00 increments. At one point I hit blackjack four times in a row while betting $60.00. Why can’t my luck run like that in real life? In any event, it only takes Larry about ten minutes to win a cool $1,046.00. Being able to bet more than $20.00 like you’re limited to in the original, sure helps, as does the fact that, unlike the original, there is no $255.00 limit here in VGA-land.


Going north, Larry comes to a hallway. There is an ashtray in front of an elevator, a pay phone to the left, and the entrance to the cabaret on the right.


In the ashtray, Larry notices a card. Picking it up, he discovers that it is a conveniently-discarded pass to the disco Larry was denied entrance to last post (1 point). Interestingly, this particular disco pass is a photo ID showing an African-American gentleman. Thankfully, and ***SPOILER ALERT*** here, Larry does not have to engage in any distasteful and racially insensitive disguises to use this thing.

Moving on, the payphone proves to be useless as some joker jammed the coin slot shut with gum. Nothing Larry does unsticks it, and the game helpfully tells us that Larry will just have to find another telephone. I love how the phone is red, like the Bat-phone from the old Adam West Batman TV show, or the phone the President of the United States supposedly used to have with a direct line to the Soviet Union . . . or is it red like a herring? The world may never know . . .


The buttons on the elevator tell Larry that this casino has 8 floors. Floors Larry notices that floors 2-7 are mostly identical as he rides the spinning elevator to the building’s apex, except that a door on floor four has a heart on it, as you can see from the screenshot above. We’ll check that out later.

Arriving at the top, Larry comes to the penthouse suites, complete with a beautiful security guard standing behind a desk.

While she is a knockout, and scantily clad to boot, Larry notices a pair of pistols slung around her hips. Her name is Faith, and she is wearing a cross around her neck. And faithful she proves, as Larry’s entreaties go nowhere, with Faith telling Larry that she could never be unfaithful to her boyfriend. After the pick-up lines go nowhere, the game informs Larry that some sort of medical stimulant may help. I put this aside and, not being able to do anything with the doors on this floor, go back down to the fourth floor to check out that heart on the door. 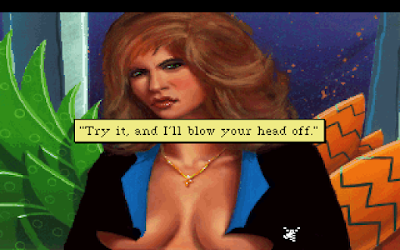 It turns out Larry can’t do anything with the door with the “cute, little, trite, cracked, plastic heart stuck to it with a thumbtack.” Unlike the other doors, knocking on it provides no humorous responses from the occupants. Nothing else being clickable, may as well check out the cabaret.

Inside, there is a chorus-line of busty redheads kicking up their legs to show off their nether-regions. Larry sidles up to the stage to get a closer look, the filthy perv, only to discover something interesting.


Not being into this sort of thing, Larry takes a seat at the only table the programmers let him and decides to admire the “ladies” from afar.


Oh well, nothing else happens. Maybe Larry will come back later. For now, let’s check out the next-door wedding chapel before heading back to the disco.

Not much here, just the chapel, an ugly fountain, and a flasher. 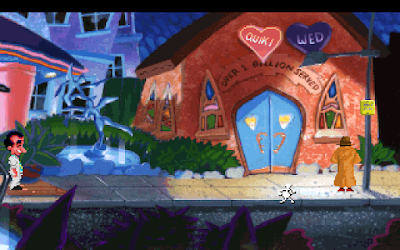 Talking to them makes Larry ask, “are either of you two named ‘Shorty?’” for 1 point. The joke hits a little better in the original Larry where the flasher is just one guy, but oh well, a pointless point is still a point, right.

The chapel itself is empty, save for the cheap decorations and a sign on the rear wall—invisible from the screen but described in the text—saying that you can marry the girl of your dreams for $100.00: “You provide the girl, we’ll do the rest for only $100.00!!”


For no reason in particular, Larry walks back to the casino, thinking it’ll be classier to hail a cab back to the disco from there than from the chapel. This time, an interestingly attired character saunters onto the screen and starts plying his wares.


Interesting. If there’s one thing I know from living in adventure game-land, it’s that if something is for sale, buy it! I click the wallet on the guy in the barrel.


Yep, that’s supposed to be Steve Jobs up there, who lost everything due to Apple’s high prices and product that did not sell as well as Microsoft-compatible PCs. Playing this in 2015, the joke hits a different spot that it must have in 1991 or 1987. Still, I now have an apple and 3 more points. I call a cab and $16.00 later Larry is back at the disco. Showing his “borrowed” pass, Larry has no trouble getting past the bouncer (5 points) and into a disco surrounded by a bunch of leisure suit-clad dudes staring at one beautiful blonde sitting all alone.


Everyone in the room is a member of Team Larry, and clicking on them brings up their names and inside jokes. But enough about programmers, how about the woman? Flush with confidence, and money, Larry takes a seat (1 point) and begins to work his charm.


Clicking the “eye” icon all over her reveals, aside from Al Lowe’s juvenile sense of humor, that this girl has expensive tastes and likes gifts. Talking to her (1 point) gets Larry started off on the wrong foot, but repeated clicks of the “talk” icon gets Larry to introduce himself and ask the woman her name, which is Fawn. “Somehow, you knew that,” the narrator tells Larry. Eventually, Larry learns that she is the kind of girl who can’t say no to nice presents. Good thing Larry is an adventure game character and has an extensive inventory crammed down his pants! Larry starts with the rose (5 points), follows up with the chocolates (5 points), and finishes strong with the diamond ring (5 points). Larry inquires if she would dance with him now, to which Fawn replies that Larry should have asked sooner. Regardless, Larry and Fawn get up and begin to trip the light fantastic.


Larry does the gag from the movie Airplane! where he throws Fawn into the air for an extended period of time, does some stereotypical Russian dancing, and catches her much, much later. After dancing, Fawn is ready to throw herself at Larry . . . provided that they are married. She asks Larry to give her $200.00 to rent the honeymoon suite at the casino, where they will celebrate after their nuptials. Being stupid, and horny, Larry gives her the money (7 points), whereupon Fawn gets up and tells Larry to meet her at the chapel on her way out. A $20.00 cab ride later, and Larry is ready to get hitched!


Forking over $100.00 to the alcoholic preacher (12 points), Larry and Fawn tie the knot, only for Fawn to run off to the Honeymoon Suite before Larry can plant a kiss on her. She promises to give Larry more than kisses, which seems a little too good to bed true for Mr. Laffer here. Nothing else to do but go rendezvous with the missus!

Larry expertly deduces that the door with the heart on it on the fourth floor of the casino is the honeymoon suite. This time, Larry is allowed in (3 points). And Fawn is waiting.


But Fawn is not interested in any hanky-panky just yet. No, she needs some wine to get her in the mood. In the room, Larry sees a bucket just waiting for some alcohol. There is also a radio by the bed. Maybe music will get Fawn in the mood? Larry turns it on (1 point) and finds that it’s stuck on the easy listening station due to a broken tuning knob. Eventually, a commercial pops up for the Ajax Liquor Store, which will deliver alcohol anywhere! Just call 555-8039 (1 point).

So I can have wine delivered by phone, but the phone in the casino doesn’t work. Does this really mean that Larry has to truck all the way back to the convenience store to use the pay phone there?


Larry calls the number from the radio (5 points) and arranges to have wine delivered to the Honeymoon Suite, the guy on the line telling Larry he’ll send one of his “hottest young men” to deliver it. Thanks! I think.


Fawn tells Larry to lie down, and that she has a little surprise for him. Gamely, Larry obliges.

Everything was going well until Larry noticed that Fawn was not getting undressed and that she began to mess around with the ribbon on the heart-shaped bed. Assuming she was getting kinky, Larry went with it, until . . .


With Larry tied to the bed, Fawn tells him that he forgot to pay her for the wine, which came to exactly the $650.00 Larry had in his wallet, tip included. “So long, sucker,” she snarls, leaving the room, and Larry’s life, for good as Larry wonders if it counts as consummation if he does it himself.

This seems like as good a place as any to stop. We’ll see how Larry gets out of this jam next time.