Where we last saw Larry, his wedding night didn’t go quite as planned. Fawn, his bride, tied him up with the tacky heart-shaped bed’s tacky bow, swiped his money as “repayment” for the wine, and skedaddled. To add insult to injury, it’s pretty clear she hopped into the bone zone with the alcohol-delivery boy while Larry was out. Can’t a guy catch a break?

It’s a good thing that Larry traded that box of wine to the friendly wino outside of the convenience store for the pocketknife two posts ago. Also, recall the wino’s semi-cryptic words about the kinky women of Lost Wages preying on handsome studs like Larry. It’s pretty easy to put two-and-two together and come up with using the knife to cut the bonds (10 points), but as far as I can tell, this is a classic Sierra Walking Dead ScenarioTM if I ever saw one.

In a humorous little animation, Larry thrusts his hips and the knife pops out from somewhere in his massive adventure game character’s pants—or in this case, boxer shorts—and lands in his hands, allowing him to cut the ribbon. The text that pops up next is a very subtle hint as to what the player may want to have Larry do next.


Time to go back to the blackjack machine. But first, let’s remember what Larry read in JUGS magazine back on May 28, 2015:

“. . . Larry reads his copy of JUGS and finds an article about window washers securing themselves with a rope around the waist before working on the sides of tall buildings . . . . A clue for the mysterious other window at Lefty’s, perhaps? If only I had some rope . . .”

Better snag that ribbon before I go (3 points). There’s nothing else Larry can do in this room, save shut the radio and take a swig of the leftover wine. Trying to take anything else gives Larry the following admonishment: “Why take it? You don’t want to remember Fawn (that scum-sucking gutterslug!).” Okay game, I get it. Time to gamble. I’d need to, anyway, because save for being able to walk to the chapel, every other destination requires taxi fare in excess of ten bucks, and I really want to get whatever it is in that window on the alley by Lefty’s. Something to help with Faith, the security guard at the casino penthouse, perhaps?

Still feeling blue, Larry figures he’ll take in the dancing “ladies” at the cabaret to cheer him up. Instead, there’s a rather pale comedian and his afro-sporting drummer cracking jokes to an audience of zero.


I’m not going to get into the minutiae of the jokes, seeing as how the last time I discussed humor in a Leisure Suit Larry game got a bit heated. Suffice it to say, the jokes are thankfully not P.C. and worth a chuckle due to Mr. Lowe’s, or whoever wrote this game’s, tendency to hit broad stereotypes in such an egregious way as to obviously be jokes. Sort of like Lisa Lampanelli minus the dirty words. Oddly enough, sitting on the far-right chair sets off the comedian’s whoopee cushion, giving Larry a point. Larry can heckle the guy, but that’s about it. Now that Larry feels a bit better, let’s head to the game room.


Here, if you lose once, you’re toast, as the machine has a $10.00 minimum, and that’s exactly how much Fawn leaves you with. Hope you saved! I sure did. No four blackjacks in a row like last time, but by betting huge amounts and liberal use of the SAVE and RESTORE features, Larry has $1,400.oo in under five minutes. Off to Lefty’s alley! Wait, that didn’t come out right . . . 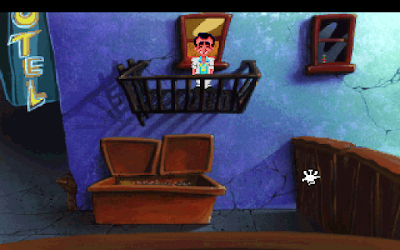 If JUGS magazine is telling the truth, and there’s no reason to believe that it’s not, all Larry needs to do in order to be just like is window-washing heroes is tie a rope around his waist in order to safely get to that tantalizing right window over there. Rope, ribbon, what’s the different? Larry ties his best knot around himself, and then around the fire escape railing, and decides to swing on over. 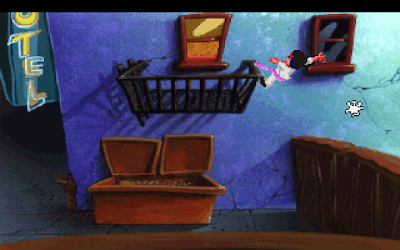 But the window’s locked. Good thing Larry has Lefty’s hammer! Lefty’s dirty alley sure contains everything a guy could ever need! Smashing the window, Larry grabs whatever is in it (8 points), which turns out to be a bottle of pills. Taking a look at the torn label on the bottle, Larry can make out the letters “nish” and “Fl.” Hey, let’s try these! 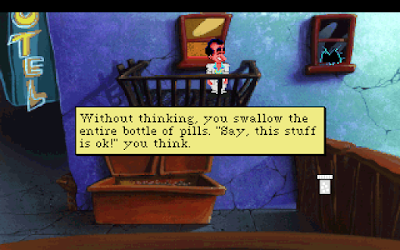 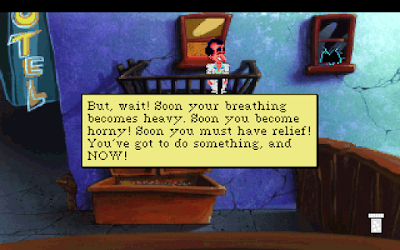 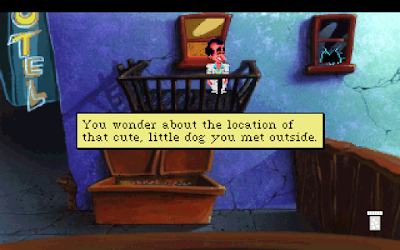 Oh! Spanish Fly! Even a dimbulb like Larry can guess who could use these, even if the game didn’t flat-out tell you. Even the Spanish-style bolero playing in the background spells it out for you. Giving the pills to Faith (5 points) gets her out from behind the counter . . . but unfortunately not into Larry’s waiting arms. 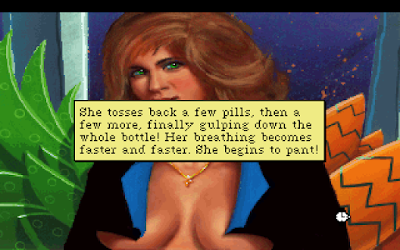 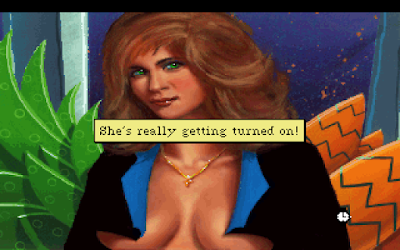 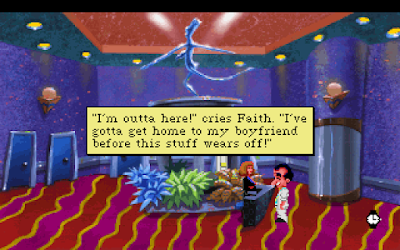 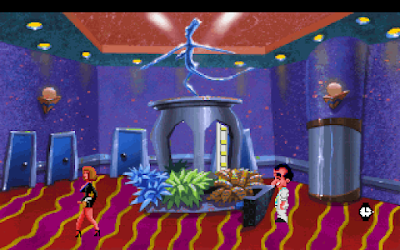 Look, Larry, don’t be so dejected. At least you’re not still a virgin! Just go see what’s behind that desk. An unlabeled button! If there’s one thing adventure game characters know, is that all buttons must be pushed, especially when you don’t know what they do! This one opens the elevator on the right-side of the lobby, headed up to the penthouse suite (5 points). This should be fun!


This place is tacky, garish, and oh-so “modern,” at least by early-90s standards. In other words, it’s right up Larry’s alley, this time. There’s a rooftop patio, but Larry wants to see what else is in this sweet suite.


There’s nothing to interact with in here, unfortunately, except for the closet door (5 points). Inside is not a dead-person’s skin hanging, or David Carradine (what, too soon?), but a deflated lonely person’s device, if you catch my drift. 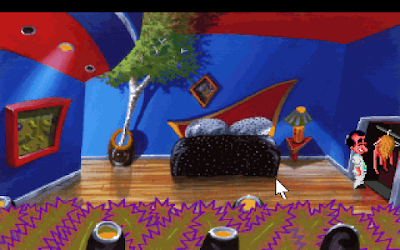 Interestingly, you click the nose/mouth icon on the doll to blow her up (5 points). Let’s take a look at Larry’s latest love interest! 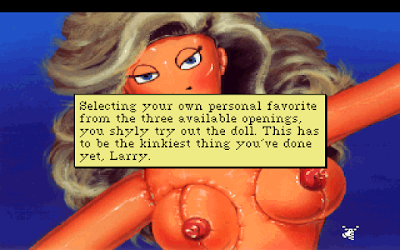 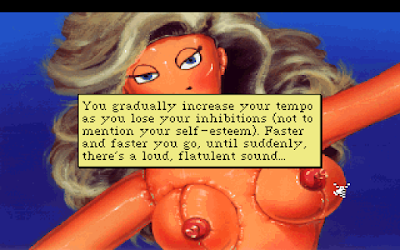 Well isn’t this embarrassing! So many questions: Who is this babe? What does she do to afford this luxurious penthouse suite? Why does she keep an inflatable doll in her closed? So many questions. Nothing left to do but get naked and jump into the hot tub with her! After all, a quick conversation reveals that she loves men in leisure suits.


Larry, obviously enamored with the naked goddess in the hot-tub with him, tries his best lines on her. She is a woman of few words, answering most of Larry’s inquiries with a smile or a wink, only speaking to tell him that her sign is “Yield.” Using the zipper icon on her earns Larry a slap, but the nose/mouth icon gets Larry to learn the name of her perfume: Apple Blossom. Still, we don’t know her name. But what’s that behind her? A towel inscribed with the name Eve. Apple Blossom, Eve . . . I get it! Again, subtlety is not the strong point of this game’s puzzles, but when the plot is as dumb as this, I suppose challenge isn’t the motivating factor for puzzle design.


All this talk of Eves and apples makes Larry decide to give her the apple he’s been carrying around for some time. I smell another potential Sierra Walking Dead ScenarioTM although it is possible to leave and, presumably, go back outside the casino in the hopes that the barrel-wearing Steve Jobs appears.

Anyway, Larry gives Eve the apple (15 points . . . only three more than blasting the blow-up doll! What the hell?), and then: 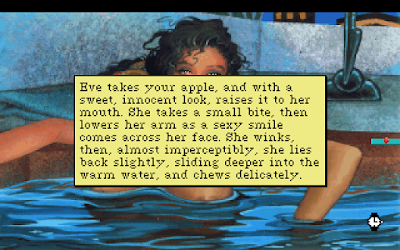 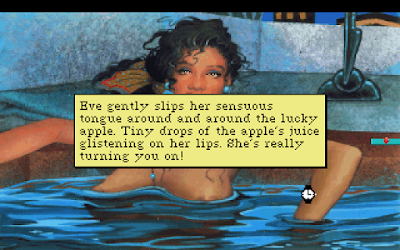 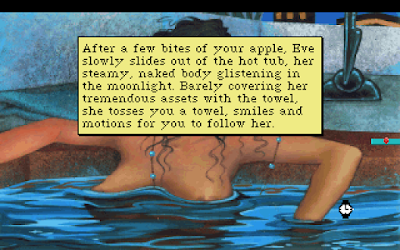 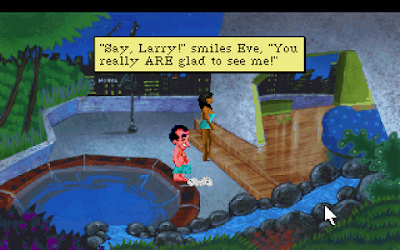 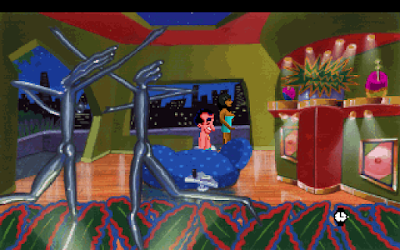 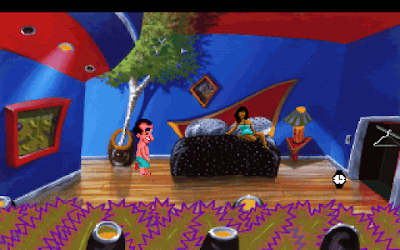 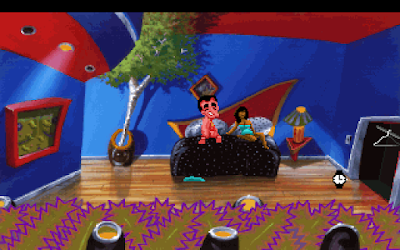 And after doing whatever it is Larry and Eve do, a leisure-suit clad Ken Williams comes out of the closet, so to speak, to shill the other games in the Larry saga, at this time 2, 3, and the then-new 5, before telling the player “You played ok, I guess” and sauntering off-screen. Roll credits, a message saying “GAME OVER NOW GET A LIFE,” and a drop back to DOS. The only question left to ask, before asking the TAG community where I missed 10 points, is, was it good for you?