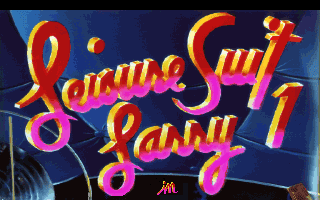 At long last, I am ready to give the Leisure Suit Larry 1 VGA remake its turn with the PISSED rating scale. Since this game is a remake, it should be interesting to see how it stacks up against Trickster’s original rating from three years ago. It may be a little of an apples-to-oranges comparison, seeing as how Trickster and I aren’t the same person (shocking, I know) but I have a feeling that the remake won’t score higher on every single metric.


Before getting started, I went through and did a second playthrough to find those missing ten points I was complaining about last post. It turns out that you can dial 209-683-8989—the Sierra hint-line at the time—for a funny little Easter egg message and ten points. “Gee,” I thought, “how was a player supposed to figure this out without a hintbook or a FAQ?” Checking the manuals that came with the collection shows a whole bunch of phone numbers, none of them the number listed above. Oh well. 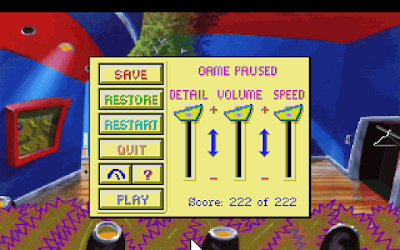 Speaking of the phone, what does the asterisk in the picture below look like to you? 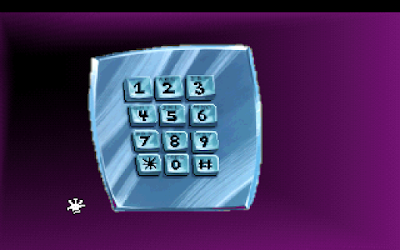 In all honesty, Leisure Suit Larry 1’s puzzles are pretty easy. Even when something seems like a head-scratcher—how do you get by Faith? What about the pills in the window? How do I get by the pimp? What am I supposed to do with the woman in the bathtub?—the answers are usually spelled right out for you, or you just need to use an item you didn’t previously have at the chokepoint, because it’s an adventure game. The Spanish music with Faith, and the game’s explicit hint that she needs medical help, don’t hold your hand as much as shove you towards the right solution, which is giving her the bottle of Spanish Fly. Getting the Spanish Fly is slightly more subtle, with the clue being hidden in the issue of JUGS magazine. Larry can buy at the convenience store. If you do not buy the magazine, the fact that you’re left with nothing to do but try your new item (the ribbon) everywhere you can follows standard adventure-game logic. And then there are the puzzles where, if you don’t have a previous item, you either need to revisit every location to find said item, or you’re dead-ended. Speaking of which, on my second playthrough I tried to find all of the “walking dead” situations in the game. Here’s my list:
Other puzzles are just plain obvious: See a drunk guy? Give them liquor! And so on.

However, despite the hand-holding, the game is designed really well. And since this is, primarily, a comedy game, I can’t fault it for being a little on the easy side. Since, graphics aside, the game is unchanged from the original, I cannot justify giving this a different rating than Trickster’s original.

The Sierra VGA-era point-and-click interface is easy to use. With this remake, blowing up the inflatable doll using the “nose/mouth” icon may be the only tricky aspect, since up until then, that icon is only used for funny messages. The “zipper” icon, conversely, comes in handy when you want to make Larry do something naughty.

As far as the inventory goes, the point-and-click interface works great for inventory management. Clicking the “eye” on each object reveals more information about it, and as a bonus for the obsessive clicker (me), every object, when clicked on another object, gives a unique and humorous message. Kudos to Josh Mandel for this attention to detail.

Again, this is a comedy game aimed at adults, and the story and setting have remained unchanged from the original. The whole thing plays like a Judd Apatow comedy: Raunchy, but with a little bit of heart. Larry is not a sleaze, he’s just a loser. And yeah, he’s looking for physical gratification, but he just wants love! He’s the butt of the jokes, much more than any of the women in the game, and the whole thing feels tongue in cheek and not titillating. If you are the kind of person who gets titillated by Leisure Suit Larry games, then please shut your computer off and seek help.

Ugh. These new graphics are ugly. They are so 90s it hurts. I understand the tacky aesthetic they were going for, but I feel that it’s a bit much. In all actuality, I like the original’s graphics better! And the cartoon-like Larry works, since that’s the visual style Larry has had since the box-art on the original game, but it looks weird when he’s matched up with the realistically-depicted women. But the sprites aren’t what offends my eyes here. It’s the backgrounds.

Sound-wise, the new tunes are great, and have that characteristic lighthearted Larry flair. However, I did get very sick of the taxicab theme.

This may sound strange, but I have to dock this category a point from Trickster’s original rating. It’s so ugly, not even the improved music and sound can balance it out for me. 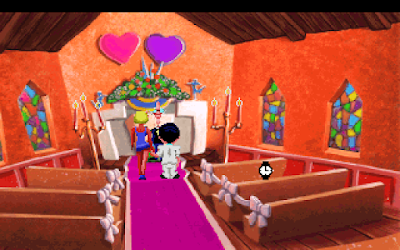 Ugly graphics aside, Leisure Suit Larry 1 does a fantastic job of setting the tone. You buy that you are in a sleazy Las Vegas-type of city, looking to gamble, party, and get lucky. The quickie wedding chapel, disco, and convenience store add to the atmosphere, as does Lefty’s gross bar.

Speaking of the environment, I said previously that each location has a lot of stuff to do in it, and I stand by that statement, the casino, Lefty’s, and the convenience store in particular. Considering that the game only has five locations that Larry revisits a lot, this keeps the game interesting. Can’t figure out what to do here? Come back later with new items. Yes, it’s adventure-gaming 101, but it helps make the world feel alive. Also adding to the environment are the things which exist purely for gags, such as the casino’s cabaret and the flasher outside of the chapel. Pointless, but fun.

No acting in this game, but the writing is fantastic! While most of it is cribbed from the original Larry, some stuff has been added, such as the inventory messages, and some characters give different responses depending on what items are clicked on them. The two drunks, the prostitute, the cabbie, the guy in the barrel, the bouncer at the disco, Faith, Fawn, and Eve in particular give humorous replies to just about everything in Larry’s inventory. It’s little touches like these that help elevate this remake above the original from a joke standpoint. Fitting, since some of the things present in the original, like the “bodily function” commands and other parser-specific jokes, are missing.

Wow, higher than I thought! But I feel that this is a fair rating. The game is fun, clever, and does what it sets out to do: Be a comedy-adventure. As it is actually funny, and plays much better as an adventure game than it has to, the extra three points seem apropos. Looking at the game rankings, I don’t think that this is overly high: The Leisure Suit Larry 1 remake will rank above the original, and Police Quest II, but still below Maniac Mansion. It hurts a little having this be higher than Larry III—one of my favorites—but PISSED don’t lie! 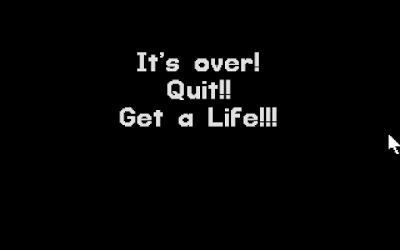 5 CAPs for Torch
5 CAPs for Charles
5 CAPs for Andy Panthro
4 CAPs for Kenny McCormick
That was that! But before we let Andy Panthro on the stage with the remake of Space Quest, let's see what are the current rankings for the 1991 games:

So far no big surprises, since everyone guessed that SQ4 will score high and Hugo II low - the high score of LSL 1 might have surprised some. We'll be updating the rankings regularly with each new game played, so you can check how well you've guessed the order of the games.
Posted by Ilmari Jauhiainen at 08:00