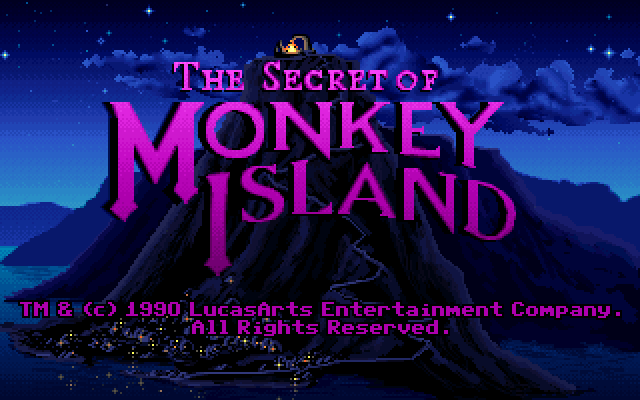 As you could probably guess, I like a good list. It hardly even matters what the topic is. Top 50 movies of 2013? 1001 Comics to Read Before You Die? 67 Best Arnie One-Liners? You name it, I can get some form of enjoyment out of it. Obviously this list-fetish has brought many Best Games of All Time lists past my eyes, and there wouldn’t be many that haven’t included The Secret of Monkey Island somewhere on them. Computer Gaming World ranked it the 19th best game ever. Retro Gamer the 33rd. The Adventure Gamers website produced a top 100 adventure games of all time a few years ago, and The Secret of Monkey Island came in at 14th, which is far and away the highest of all the games on the playlist so far (Hero’s Quest didn’t even make the top 100 though, so I’m not sure it’s a list worth paying much attention to). Anyway, the point is that we’ve reached a very significant moment in the genre’s history, and it’s one I’ve been looking forward to since the blog began. I really don’t think I’ve played the game since my Amiga days, which finished nearly 20 years ago, so I doubt I’ll be breezing through it on memory alone the way I did with the King’s Quest Remake. Before I attempt to make a pirate out of Guybrush though, it’s worth spending some time looking at the game’s origins, and who was involved in its creation. 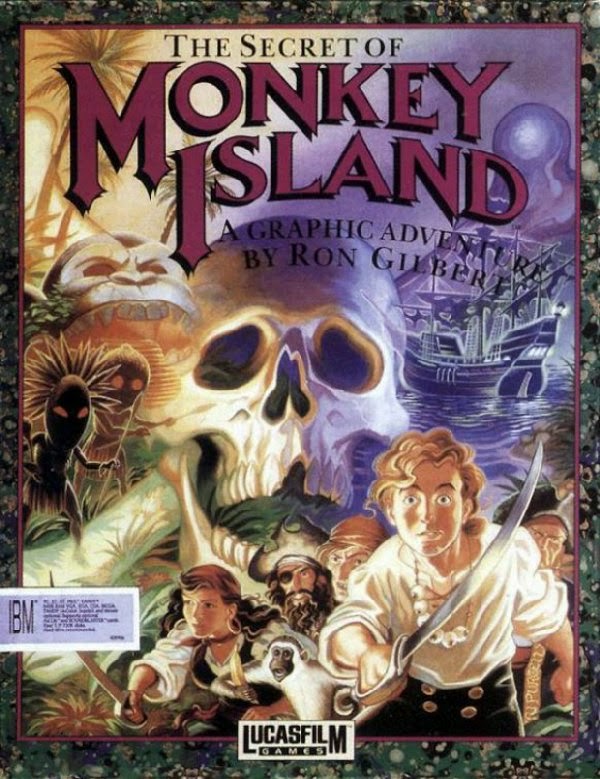 If this cover doesn't say adventure, I don't know what does.

The concept behind The Secret of Monkey Island was conceived by Ron Gilbert back in 1988. He’d just completed Zak McKracken and the Alien Mindbenders and was brainstorming some new ideas for future adventure games. One of these ideas was to base a game in the world of pirates, with the feel he would be going for based on the Pirates of the Caribbean theme park ride and a novel by Tim Powers called On Stranger Tides (the latter of which combined piracy with voodoo). He pitched the idea to LucasFilm, and they loved it. However, the company’s main designers (including Gilbert) were all currently assigned to Indiana Jones and the Last Crusade. Once that game was in the bag, Gilbert immediately began production on Monkey Island.  He quickly realised that he was going to need significant help, so hired Tim Schafer and David Grossman to help him (neither of whom had been involved in an adventure game to date). The three of them would design and program the game together, with Schafer and Grossman also producing much of the game’s dialogue. There were issues early on with the three men’s writing styles differing too much to form a cohesive whole, but Gilbert made things work by assigning each of them to different characters and story sections, depending on the language and humour that was required. The majority of the dialogue was created on the fly as each programmer was producing these assigned scenes. 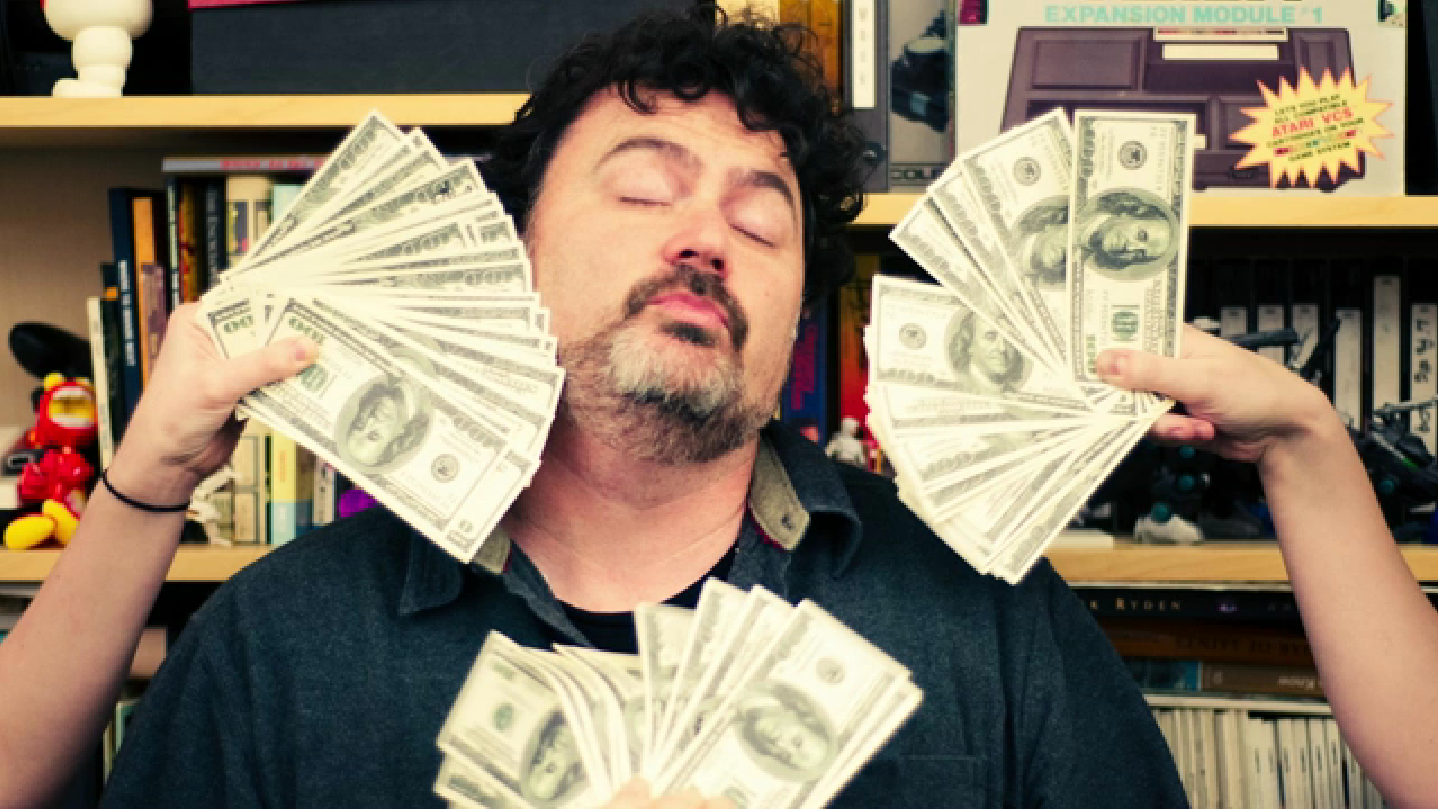 This is the first time we've seen Tim Schafer, who would go on to make his fortune as designer of adventure classics such as Day of the Tentacle, Full Throttle and Grim Fandango.

As far back as Maniac Mansion, Gilbert’s goal had been to make gameplay as accessible as possible. He’d always been frustrated with adventure games (particularly those by Sierra) where small mistakes lead to a game over screen or worse, a dead end. He was therefore determined that there would be no dead ends in his games, nor would the player die at any stage. This philosophy was applied to Maniac Mansion, but unfortunately the complexity of the game got away from him, and the result included quite a few unforeseen dead end situations. Gilbert, Schafer and Grossman were very careful while making The Secret of Monkey Island to bring this dream to fruition, and while they may not have been the first to succeed (Brian Moriarty’s Loom was the first game to successfully follow the LucasArts philosophy), they achieved it nonetheless. Speaking of SCUMM, The Secret of Monkey Island uses the same version of the engine that was used for Indiana Jones and the Last Crusade, with only minor changes. That game had been the first to include branching dialogue options, but Gilbert built upon the technology to form a more entertaining and efficient system for Monkey Island. He also removed the “What is” option, and instead allowed the player to just move their cursor around the screen to highlight objects. The other significant change was in the graphics department. From what I can tell, the game was originally released in the same 16 colour, 320x200 pixel resolution as the previous SCUMM games, but shortly afterwards (as in a matter of months) was given a VGA makeover, with 256 colours to boot. 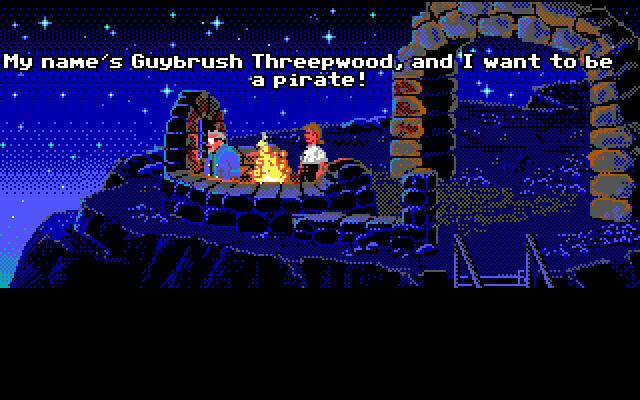 EGA: The difference might not seem all that obvious here... 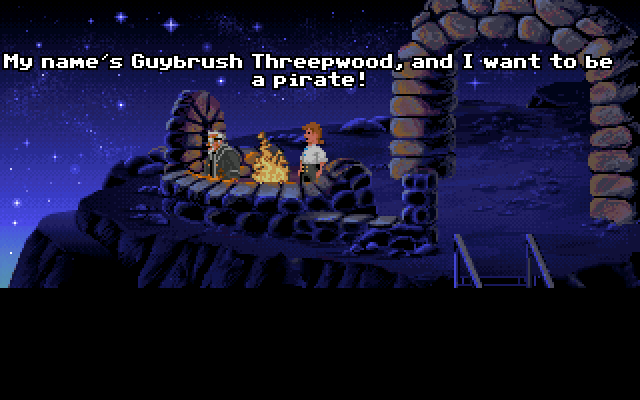 VGA: ...but it is when you play them side by side.

While we’re on the topic of graphics, Gilbert hired a bunch of talented people to produce the characters, animation and background art required to produce his vision. A major part of the team that worked on the graphics for Indiana Jones and the Last Crusade (Steve Purcell, Mark Ebert and Martin Cameron) came on board, as did the man behind the beautiful background environments in Loom, Mark Ferrari. Another eight team members created the art for the 256 colour version, including James Dollar and James McLeod (both of whom worked on Indiana Jones as well). The music of the game was composed by Barney Jones, Michael Land, Patric Mundy and Andy Newell, although I believe the famous “pirate reggae” was composed entirely by Land. Apart from Newell, who edited and mixed the music for Loom, I can’t see that any of these guys had done anything in the gaming world prior, which is surprising considering the hugely memorable quality of the resulting work. It’s worth noting that a much higher quality soundtrack was produced for the 1992 CD-ROM version. I do wonder whether it’s that version, or perhaps one from a later Monkey Island game, that I have in my head right now?! The only other involvement I’ll mention is that of Orson Scott Card. No doubt his involvement was over-emphasised for Monkey Island as it was for Loom, but it is often suggested he wrote a number of the insults that were used in the sword fighting scene while visiting the Lucasfilm headquarters one day. 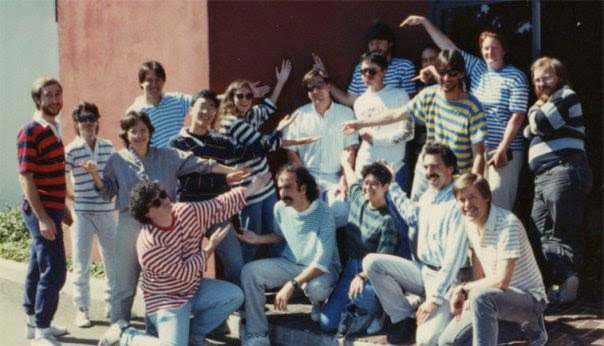 The Lucasfilm team in 1990, all dressed up as Ron Gilbert.

There have been a few different versions of The Secret of Monkey Island, so it’s important to note which one I’ll be playing. The first version released, in October 1990, was a 16 colour EGA version on floppy disks. My rule is that I will always play the first version of a game unless the next version of it was released within twelve months of the original. From everything I can find, the 256 colour VGA version (also on floppy disks) was also released prior to the end of 1990. I’ve found this VGA version, and the title screen does indeed have 1990 at the bottom of it, so I don’t think I need any further proof that this is the one I should be playing. The third version, released in 1992, was on CD-ROM, and included the higher quality music that I mentioned earlier. Finally, a complete remake of the game was created in 2009, which I guess I’ll be playing in around 20 years time. I’ll be playing this game in SCUMMVM of course, and have found a copy of the original manual. There isn’t really anything in there that I didn't already know, but it does give a little bit of info about our hero’s motivation, for those of you that have never played the game. “In The Secret of Monkey Island, you play the role of Guybrush Threepwood, a young man who has just hit the shores of Melee Island (somewhere in the Caribbean). Our naive hero’s travels have led him to Melee Island in a quest to fulfil his life’s ambition...to become a fierce, swashbuckling, blood-thirsty Pirate!” So...who’s with me?! 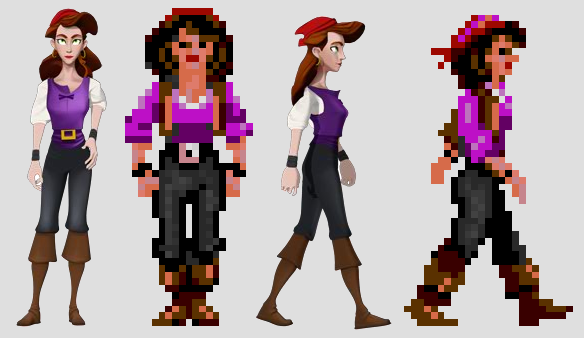 Note Regarding Spoilers and Companion Assist Points: There's a set of rules regarding spoilers and companion assist points. Please read it here before making any comments that could be considered a spoiler in any way. The short of it is that no CAPs will be given for hints or spoilers given in advance of me requiring one. As this is an introduction post, it's an opportunity for readers to bet 10 CAPs (only if they already have them) that I won't be able to solve a puzzle without putting in an official Request for Assistance (see below for an example bet). If you get it right I will reward you with 30 CAPs in return. It's also your chance to predict what the final rating will be for the game. Voters can predict whatever score they want, regardless of whether someone else has already chosen it. All correct (or nearest) votes will go into a draw.

Extra Note: We're extremely lucky to have a generous sponsor like Lars-Erik. Unfortunately, many of the prizes he has been donating lately have been unclaimed. This is obviously happening because winners already own the games, so we've decided to change things up a little bit! From now on, the person who correctly predicts what score I will give the current game (or are closest) will get to choose one of the next five commercially available games on the playlist. Lars-Erik will donate the game once a choice is made. So, if you predict the right score (or are closest), you will get 10 CAPs and a copy of any of the following games:

Email ThisBlogThis!Share to TwitterShare to FacebookShare to Pinterest
Labels: 1990, Introduction, The Secret of Monkey Island, The Trickster