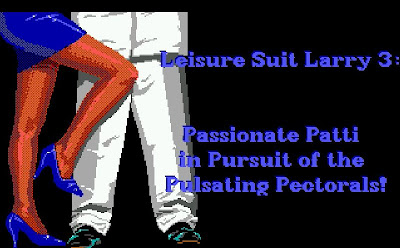 It doesn’t feel like much time has passed since I played the second Larry game, and here we are at Leisure Suit Larry III: Passionate Patti in Pursuit of the Pulsating Pectorals. I enjoyed part two quite a bit, but there were some serious parser issues that made it much more difficult than it should have been and adversely affected its rating. I also remember noting how far removed from the original Leisure Suit Larry game the sequel felt, having more of a parodied James Bond-ish storyline as opposed to the highly sexual escapades that one would normally associate with the series. I had more sex in Codename: ICEMAN than I did in Leisure Suit Larry Goes Looking for Love (in Several Wrong Places), which shows how far from the nest the game flew. Whether it’s a good or a bad thing, Larry III returns to the original’s themes. Before I expand on that comment, let’s take a look at the technical side of things. 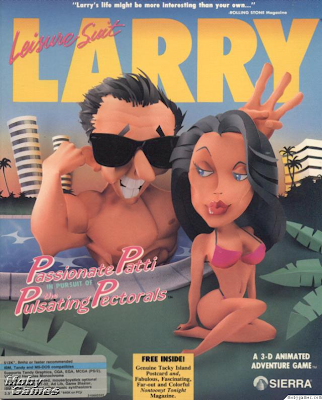 Larry III is the sixth game to utilize Sierra’s SCI0 engine (version 0.000.572 to be precise). As I’ve mentioned before, I’m not playing the games in the order they were released, so while I’ve played four of the five previous SCI0 games (King’s Quest IV, Larry 2, Police Quest 2 and Hero’s Quest), I’ve not yet played the fourth release (Space Quest III). Codename: ICEMAN was released about a month after Larry III, which shows why in future I need to pay more attention to actual release dates rather than just the year they hit the shelf. The game was developed for DOS, Atari St and the Amiga, and once again Al Lowe was the brains behind it, handling all design and a fair bit of the programming. His partner in crime on the programming front was Juan Carlos Escobar, whose only previous credit was porting the first Leisure Suit Larry to Apple. The graphics were handled by Roger Hardy and William Skirvin (with the latter having already cut his teeth on King’s Quest IV and Larry 2) and the music and sound by newcomers Mike Dana and Robert Atesalp. 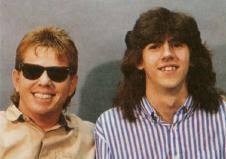 William Skirvin and Roger Hardy: I never get bored of seeing eighties photos of computer geeks. You just don't get mullets like this anymore!

As I mentioned earlier, Larry III has much more in common with the first game than the sequel. Gone is the linear progression found in Larry 2 in favour of an open ended environment that can be explored right from the start, and the “dating sim” aspect of the original has also returned. Probably the only major element of the sequel to remain is Nontoonyt Island, although the island has since been transformed into a resort. Even the title’s Passionate Patty went by a different name when she first appeared in Larry 2, being called Polyester Patty at the time. I recently purchased the Leisure Suit Larry Greatest Hits and Misses collection off GOG, which contains Larry 1 through to 6 (4 was never released). This pack included the manual for part III (which resembles a tourist manual), as well as a hint book (which I won’t be using obviously), a postcard, and wallpapers of various resolutions. One thing I don’t think I’ve ever mentioned is that I always make my laptops wallpaper the game I’m currently playing, partly to get in the mood, but mostly just to remind myself to play or write instead of being distracted by the endless other things that fascinate me. It's handy when GOG includes them in the package! 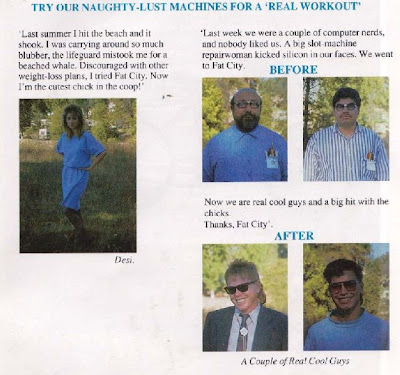 Some of the ads in the tourist manual are very amusing indeed, especially when you realise the team behind the game are posing for them all.﻿

Ilmari commented recently about the potential of running into some issues when playing Larry III and it’s very interesting to read about how these problems arose. I’m aware that there is one section of the game that makes the player repeat an action multiple times, with the repetitions necessary being directly proportional to the clock frequency of the player’s processor. This could obviously become a big problem on modern computers, but I don’t yet know whether using SCUMMVM will avoid the problem or not. I assume I can tinker with my settings at the time if necessary, but we’ll have to wait and see. Before I start (and before anyone makes any predictions), I should state that I definitely started playing Larry III when I was a kid, but I’m certain I didn’t get very far. I never had the manual for starters, which appears to act as copy protection, and recall getting stuck very close to the start. Well, it’s time for me to put the suit back on and go and find Larry a woman! Should be humorous, regardless of my success rate. 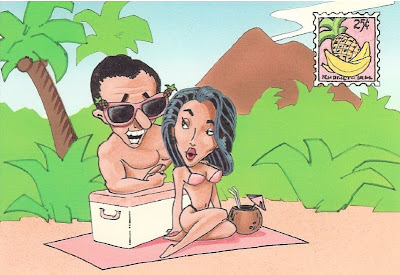 The postcard that came with the game


Note Regarding Spoilers and Companion Assist Points: I've recently written a set of rules regarding spoilers and companion assist points. Please read it here before making any comments that could be considered a spoiler in any way. The short of it is that no points will be given for hints or spoilers given in advance of me requiring one. As this is an introduction post, it's an opportunity for readers to bet 10 points (only if they already have them) that I won't be able to solve a puzzle unassisted (see below for an example). If you get it right I will reward you with 80 points in return (it's going to keep going up until someone beats me)! It's also your chance to predict what the final rating will be for the game. Voters can predict whatever score they want, regardless of whether someone else has already chosen it. All correct (or nearest) votes will go into a draw, which I'm yet to figure out the form of (we'll cross that bridge when we get there).

Extra Note: Once again, Lars-Erik will gift the next readily available game on the list to the reader that correctly predicts what score I will give this game. So, if you predict the right score (or are closest), you will get 10 CAPs and a copy of Tex Murphy 1 & 2 from GOG! Good luck!
Posted by The Trickster at 21:48