Well LucasArts can seemingly do no wrong, at least at this stage of the adventure game evolution. I really enjoyed Indiana Jones and the Last Crusade and while it’s not a flawless game, it was extremely well made and thoroughly entertaining throughout. The main question I have though is whether or not the game can surpass the 62 I gave both Maniac Mansion and Zak McKracken. I’m thinking the PISSED rating scale may favour the sheer professionalism on show here…

Puzzles and Solvability
Overall I really enjoyed the puzzle aspects of the game, but there are some flaws to mention. For starters, it should come as no surprise that I think there were too many mazes in the game. It seems to me that the designers realised the game would have been very short without at least a few superfluous mazes to keep the player occupied. That being said, it’s nowhere near as bad as it was in Zak McKracken, and I really enjoyed the castle section of the game (which I was able to map easily), which I guess could be considered a maze of sorts. There’s also a bit too much emphasis on trial and error to solve the conversation puzzles. LucasArts quickly learnt how to use the branching dialogue systems in games like Monkey Island, but their first attempt didn’t quite hit the mark. I'm nitpicking though, as the typical point and click puzzles were quality, had a good difficulty balance (apart from a couple of obtuse solutions near the start), and the many alternate solutions (that were mostly pointed out to me by readers) were very impressive indeed. I also finished the game without requiring assistance, which may not be a very objective way to judge the solvability, but undoubtedly increased my enjoyment.
Rating 7 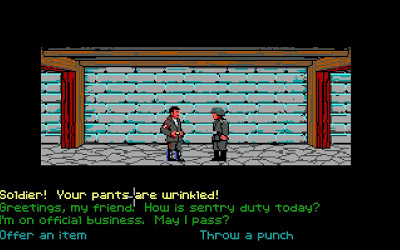 Finding the correct dialogue path is purely guesswork and for me resulted in stacks of restores.

Interface and Inventory
The SCUMM interface was already the best in the business, but Indiana Jones and the Last Crusade managed to improve upon it. Dropping some of the more superfluous actions (“Read”, “Put on” and “Take off”) certainly helped, but it was the addition of “Look” and “Talk” that pretty much removed every cause for frustration I had in LucasArts' previous adventure games. The inventory is exactly the same as before, which means it works perfectly well when combined with the sentence building action interface, but becomes a little unruly once you’ve got more than about eight items in there (although that happens rarely in this game and never for very long). That leaves only the action sections to discuss, which unfortunately is not where the game shines. While I proved that fighting is not completely necessary to complete the game (well...almost), it’s overly difficult to keep enough health intact if that’s the way you choose to play. Flying the plane is also not much fun, but it’s probably the first trial in the temple that shows the limitations of SCUMM for action based puzzles. If you don’t have a “duck” action, how can the player duck? Take the 7 that Zak got, add 1 for the verb interface improvements and remove 1 for the action issues...
Rating: 7 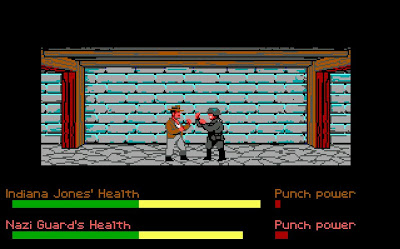 Even when I was really good at blocking, my health bar decreased quickly for no particular reason

Story and Setting
Let’s start with the good. This is a game where you get to play as Indiana Jones and hunt down the Holy Grail across various locations. Can that really be bad!? The game designers had it easy on that front, and all the Grail articles, inscriptions and dialogue were entertaining and intriguing. That said, I still had a lot of problems with the story for one simple reason. I haven’t seen the movie in about ten years! There are characters in the game that serve no purpose whatsoever, other than to make the scenes as much like the movie as possible. As far as I could tell, Marcus does absolutely nothing in the game (he wasn’t even given a name for a while), yet he turned up all over the place. Elsa played a similar role and it’s possible that I simply didn’t experience the alternate sections where they played a part, but I have to say it was off-putting. It may have made complete sense to someone familiar with the movie, but I don't think that should be a prerequisite. Other scenes feel really forced, and make giving the player a choice a bit of a farce. I found three completely different ways to rescue Henry, but no matter what I did, we always got recaptured immediately, I’m guessing so we could re-enact the chair scene that must have been in the film. I still don’t know what purpose me scaling the castle wall and finding Henry through the window could possible serve, and Donovan killing himself at the end because he was impatient was more than a little unsatisfying.
Rating: 5 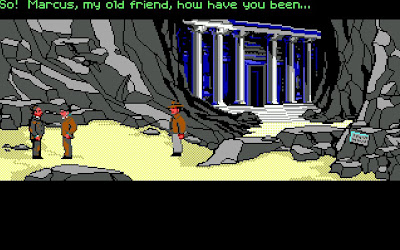 Oh...and what are you actually doing here?

Sound and Graphics
The use of sound effects is slightly better than in Zak McKracken. Gone are the pops and grating sounds that were a feature of the previous two LucasArts outings, replaced by more realistic if not terribly frequent sound effects. The music is of course classic, being John Williams highly memorable theme, but there are other moody pieces of music that suit the underground and suspenseful sections of the game that I didn't recognise. I have to give a huge amount of credit to the graphics team for the amazing job they did with only sixteen colours. I’m sure the VGA version looks better, but for EGA, this is about as good as it gets. The animation is also very impressive, with Indy looking awesome swinging across the room with his whip. All up I’d have to say that this is the best looking game on the list so far, surpassing the SCI0 games from Sierra and Zak McKracken fairly convincingly. Still, I have to be careful with this category, as there’s a LONG way to go from here. I can't rate it less than Hero's Quest or Zak, so 7 it is!
Rating: 7 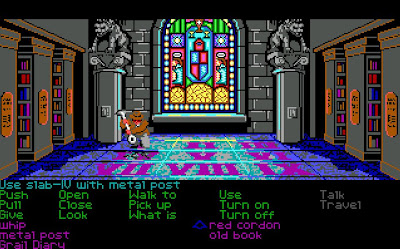 The animation is smooth and convincing and I really can't believe what they did with sixteen colours!

Environment and Atmosphere
The environment, as you would expect in an Indiana Jones game, is really quite varied. A New York college, tunnels beneath a library in Venice, a Nazi filled castle in Germany, an ancient temple in Turkey, it’s all well visualised and interesting. Given how wide-ranging the locations are that Indy visits throughout the game, it’s unsurprising that the atmosphere is also quite varied. I personally found the whole castle section of the game, which for me made up half of my playing time, to have a great atmosphere, not only due to the location and the lightning filled backdrop, but also due to the suspenseful nature of the setup. I know others found trying to evade guards to rescue Henry to be tiresome, but I really enjoyed what was a challenging experience and found it difficult to pull myself away from it. I can't say any of the other sections matched this part of the game for atmosphere, but it is impressive how perfectly the designers captured the feeling of fun and adventure that is found in all the Indy movies. I'm going with a 6 here, as some sections are clearly just there to follow the movie's structure and add very little value.
Rating: 6 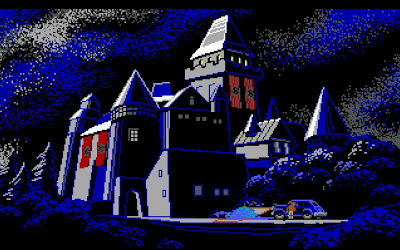 Norman Bates had nothing on this!

Dialogue and Acting
Many readers predicted that Indiana Jones and the Last Crusade would clean up in this category and I can’t argue. It’s the first game to bring any sophistication to conversations, with branching dialogue paths and alternate puzzle solutions found only by exploring these paths. As I’ve already mentioned earlier, it’s by no means perfect (there’s too much trial and error needed to find the right branch of conversation), but it’s a big step in the right direction and one I’ve never heard attributed to this particular game. Even ignoring that aspect, the actual story dialogue is fantastic, and it should come as no surprise that it’s both cinematic and thoroughly entertaining throughout. LucasArts raised the bar in this game while keeping the level of precision and professionalism that was already prevalent in their creations. I’m giving it the first 7 for this category, but games will have to improve from here to get the same.
Rating: 7 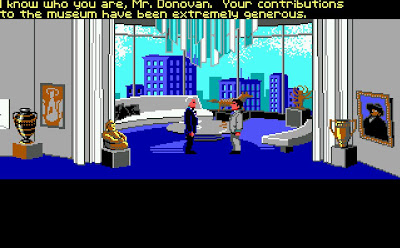 It helped that I could hear Harrison Ford's voice in my head throughout the entire game. 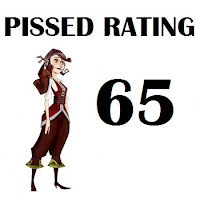 ...we have a tie!!! Both Tymoguin and marc-aut predicted 65, so I'm going to have to figure out a way to decide upon a winner. I'm tempted to give it to Tymoguin as he also predicted that the game would get the first 7 for Dialogue and Acting, but that doesn't seem entirely fair. You know what? I'm feeling generous. You both win and I'll pay for one myself. Congratulations! Send an email to theadventuregamer@gmail.com and I'll reply with the GOG codes.

5 CAPs for Ilmari
• Trickster Assist Award – 5 CAPs – For defending the honour and integrity of The Trickster
Posted by The Trickster at 17:50

Email ThisBlogThis!Share to TwitterShare to FacebookShare to Pinterest
Labels: 1989, Final Rating, Indiana Jones and the Last Crusade - The Graphic Adventure, The Trickster